Skoda has taken the curtains off the Yeti Xtreme concept at Worthersee.

Described as a “crisp and robust interpretation of the popular compact SUV,” the Yeti Xtreme sports an aggressive matte grey exterior with modified bumpers, reside side skirts and extended fender flares. The model also gets yellow and green accents, and 17-inch alloy wheels with off-road tires. It boasts two hexagonal exhaust pipes and has received underbody protection to create a more rugged appearance. 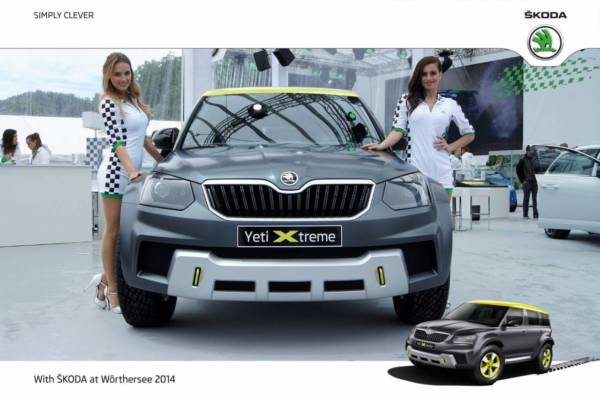 “ŠKODA has had a history in motorsport spanning almost 113 years,” says ŠKODA CEO Prof. Dr. h.c. Winfried Vahland. “Our success is the result of the technical expertise and the passion of the company and our engineers. The GTI event – as a major event for all tuning and motorsport fans – is a fantastic place to demonstrate this devotion with sporty and particularly emotional models.”

Powering the Yeti Xtreme Concept is a 1.8-liter TSI four pot motor that churns out 150 PS (110 kW) and 250 Nm (184 lb-ft) of torque. It is connected to a six-speed DSG transmission which sends power to the ground via an all-wheel drive system. This setup enables the crossover to accelerate from 0-100 km/h in 9.0 seconds before hitting a top speed of 192 km/h (120 mph).