Remember the Skoda Kodiaq? It’s the Czech car manufacturer’s first large SUV, which was unveiled in September last year (2016). The Kodiaq should be India bound sometime in late-2017 or 2018, but before that, Skoda has whipped up two of its variants – the Kodiaq Sportline and the Kodiaq Scout. Both will make their world premiere at the Geneva International Motor Show (7 to 19 March 2017).

Also Read – The new Skoda Kodiaq: Images, Details and all you need to know 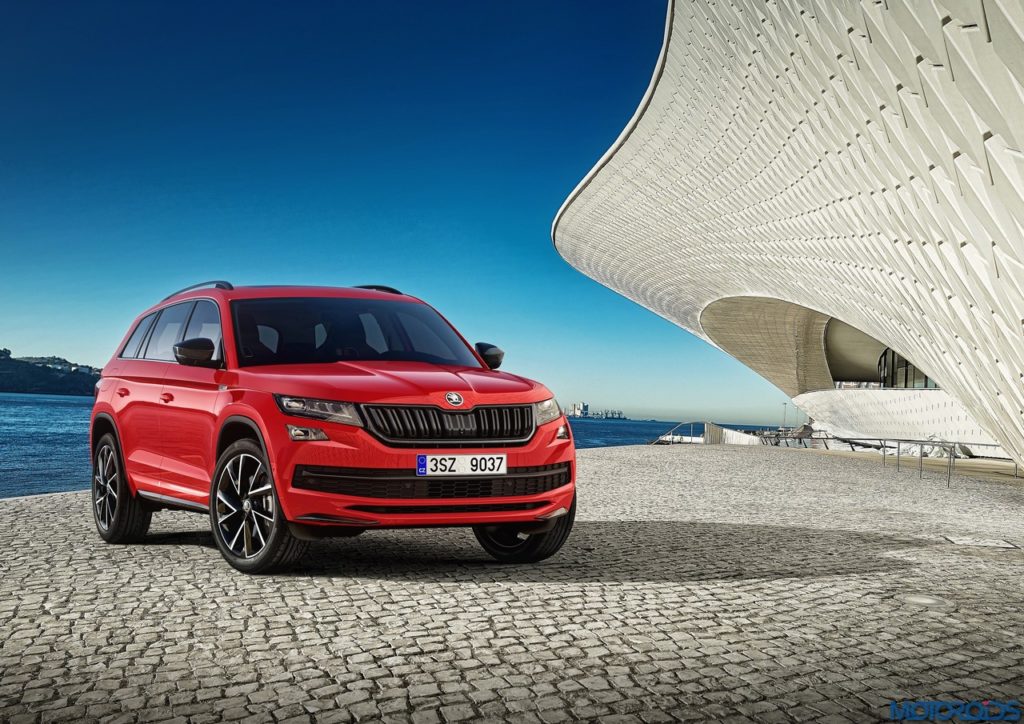 The Skoda Kodiaq Sportline features certain bodywork elements and special features finished in black. The radiator grille, roof rails, wing mirror housings and side window trims all come in black while the rear window and rear side windows are tinted. The rear end gets a narrow, silver-coloured trim below the bumper.

The protective side trims of the Skoda Kodiaq Sportline are body-coloured. It comes with 19-inch alloy wheels in a special new design as standard. As an option, 20-inch wheels are also available. Furthermore, it bears a small badge with the model designation on the front wing. 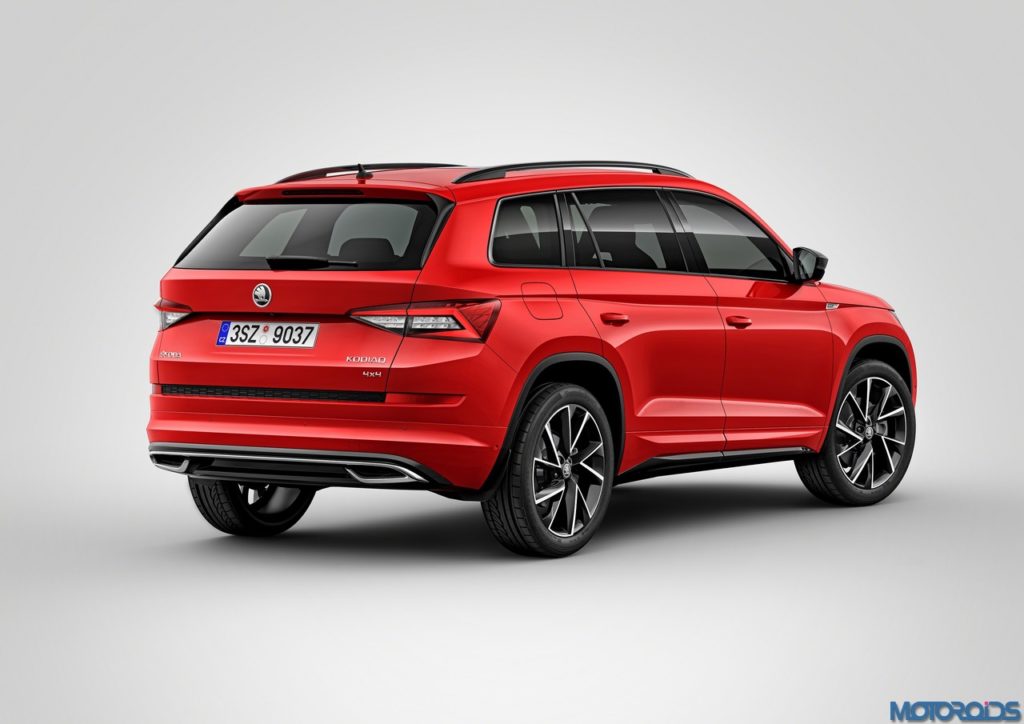 The Skoda Kodiaq Sportline is based on the SE trim level. Additionally, it is equipped with Alcantara sports seats (driver’s side electronically adjustable including memory function) with silver-coloured stitching. The multifunction steering wheel, which – like the gearstick – is leather covered and aluminium pedals. The multifunction display includes representation of G-forces, the turbocharging pressure, the current engine output and the temperature of the oil and coolant. 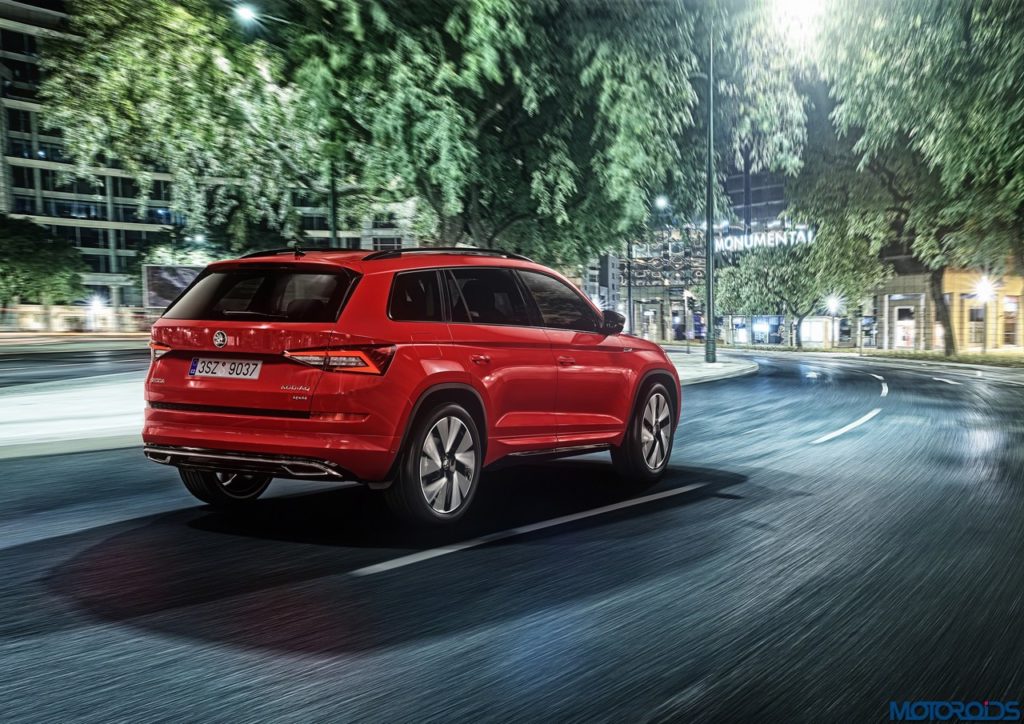 Furthermore, the Skoda Kodiaq Sportline comes with the following standard equipment: electronically adjustable and foldable wing mirrors with dip and memory function as well as Boarding Spot (lights in the wing mirror which shine onto the floor), rear-view mirror with rain sensor and dip function, a Maxi DOT display, LED ambient lighting for the interior which can be set to one of ten colours, the Kodiaq logo in the door sills, ‘Sport’ trim, Alcantara decorative inserts and floor mats with silver-coloured stitching.

There is a choice of two petrol and two diesel engines available for the Skoda Kodiaq Sportline: 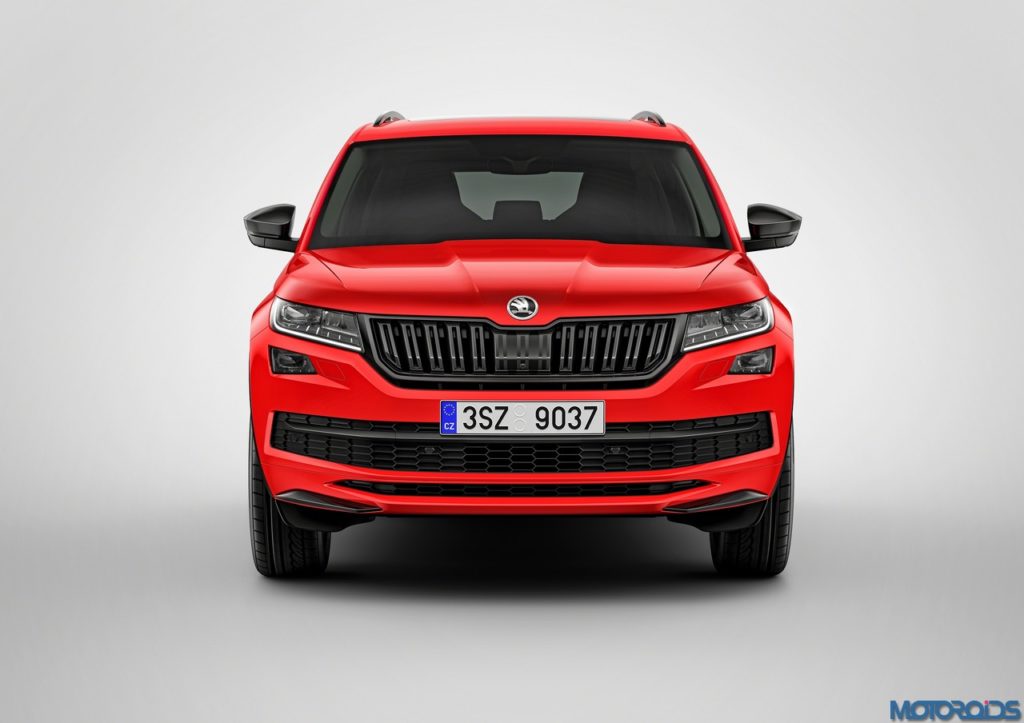 The Skoda Kodiaq Sportline is available with all-wheel drive as standard, while Adaptive Dynamic Chassis Control (DCC) is available as an option. The electronically regulated dampers can be set by the driver to one of three modes, Comfort, Normal and Sport.

Off-road cred comes courtesy a ground clearance of 194 mm, and a ramp angle of 19.7 degrees. The approach and departure angles are 22.0 and 23.1 degrees respectively due to the short overhangs. 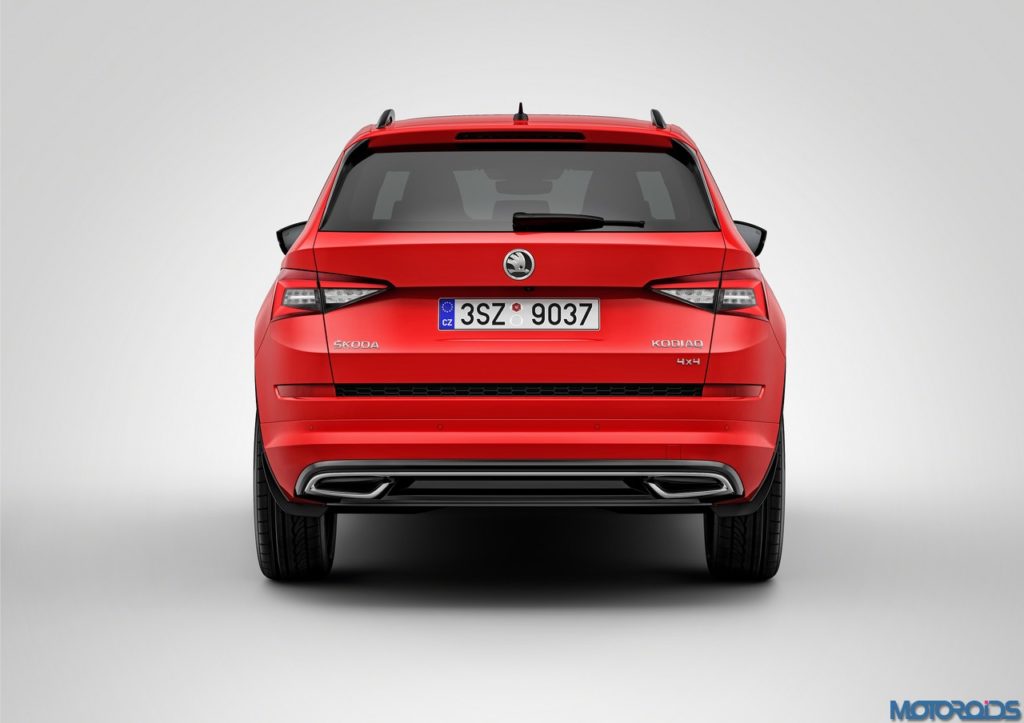 The Skoda Kodiaq Sportline is equipped with all the modern infotainment systems of the new large SUV. The capacitive touch displays feature a glass design (except for the standard Swing sound system). The top-of-the-range version, the Columbus navigation system, has a 9.2-inch monitor, a Wi-Fi hotspot and an LTE module.

The automatic Emergency Call function comes as standard, while the mobile online services from Škoda Connect app can also be availed on the Sportline. 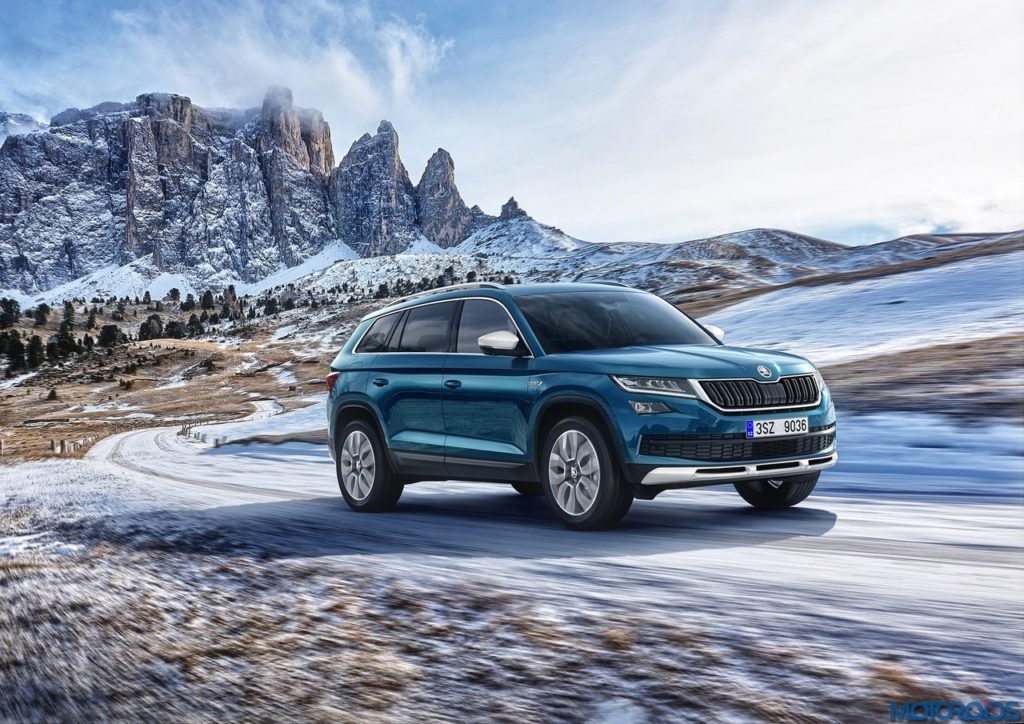 Besides the Sportline, the Kodiaq will spawn another variant – the Kodiaq Scout. While the Sportline is the sportier spin-off, the Scout goes for a rugged and robust appearance. Cue to the silver-coloured design details including distinctive under-body protection at the front and rear.

Besides the underbelly protection, the Skoda Kodiaq Scout is recognisable from the outside by the tinted rear window and rear side windows and silver-coloured details. The radiator grille is framed by a silver-coloured trim. The roof rails, housing of the wing mirror, the side window trims as well as the front and rear under-body protection, which is positioned beneath the bumpers and visually split into three parts, are also silver in colour. 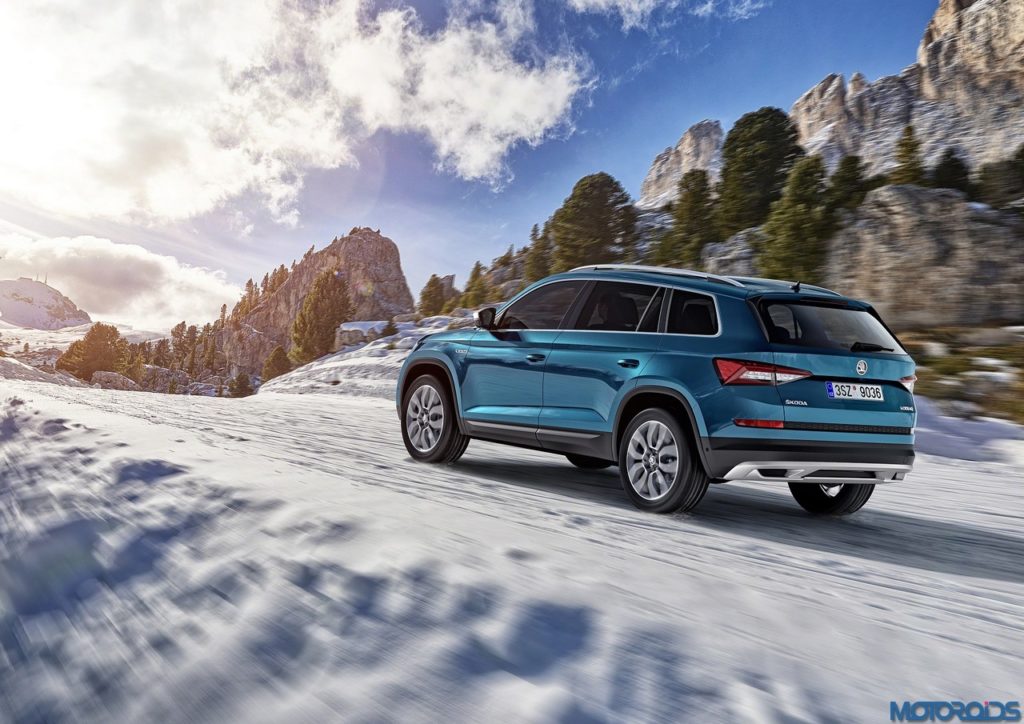 Like the Sportline variant, the Skoda Kodiaq Scout is also based on the SE trim level. Standard equipment in the interior includes a multifunction steering wheel, LED ambient lighting in ten colours, a Modular Infotainment Matrix (MIB) with eight speakers, Alcantara-covered seats with the Kodiaq logo, door trims in the Alcantara design, steel pedals, textile floor mats and the Kodiaq logo in the front door sills.

Like the Sportline variant, the Skoda Kodiaq Scout is available with choice of two petrol and two diesel engines, which comes with all-wheel drive in all versions.