Audi’s Ingolstadt production line rolls out the six-millionth Audi with quattro drive. This feat comes about one and a half years after the five-millionth quattro was produced. Audi will deliver the jubilee car, an Audi SQ5* in monsoon gray metallic, to a family in the United States.With approximately 170 quattro versions, the brand with the Four Rings offers the biggest selection of all-wheel drive vehicles amongst the premium manufacturers. 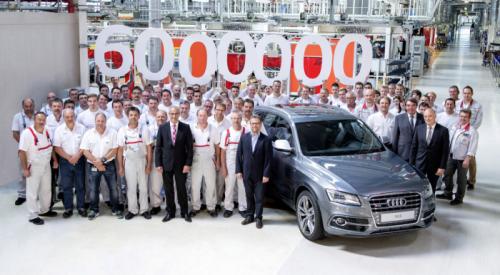 Expressing his views on the six-millionth Sudi with quattro all-wheel drive, Dr. Hubert Waltl, Board of Management Member for Production at AUDI AG said, “Dynamism and sportiness, the utmost technical precision and safety – that’s what Audi’s quattro technology stands for. More than 30 years ago, it was recognized as a pioneering accomplishment; today, it is synonymous with technical progress.”

Peter Mosch, Chairman of Audi’s General Works Council said, “Our colleagues’ expertise in the field of all-wheel drive is impressive; it demonstrates our ‘Vorsprung durch Technik’ and thus makes an important contribution to the brand’s image. Without our qualified and flexible team, this milestone would not have been possible in such a short time.” 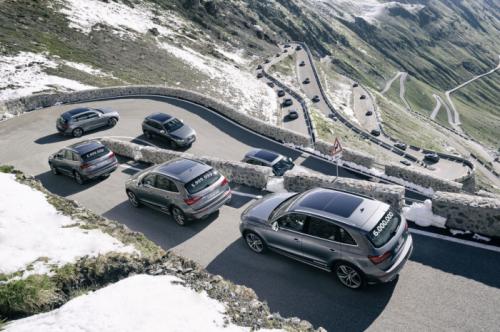 In 2013, Audi produced a total of 710,095 automobiles with quattro drive. At the two German sites in Ingolstadt and Neckarsulm, a total of about 2,000 Audi models with all-wheel drive roll off the production lines every day. Nearly 44 percent of all Audi customers decided in favor of a quattro model in 2013. No other premium manufacturer sells more cars with all-wheel drive. The best-selling model was the Audi Q5, followed by the Audi A4.

With approximately 170 quattro-model versions – including the different body shapes, engines and transmissions – Audi offers the biggest selection of all-wheel drive cars amongst the premium brands. The quattro technology is available across all model series while the models Audi Q7, Audi R8, Audi A4 allroad, Audi A6 allroad and all S and RS models are only available with quattro drive.

What do you think of Audi producing more than six million quattro all-wheel drive vehicles? Share your thoughts through comments below.