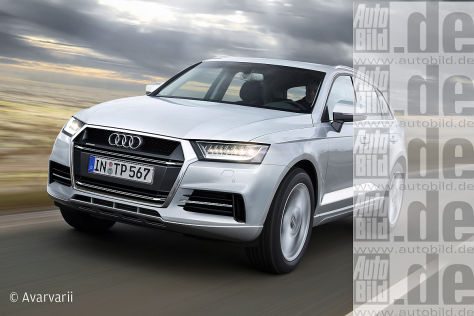 The Audi Q5 is a global success, and in its next generation model, the mid-size SUV is all set to look sharper, snazzier and meaner. German auto media giant Autobild has rendered the 2016 Audi Q5, and if one is to go by their prediction, Audi are primed to infuse a lot of aggression into the Q5’s rather subtle design.

Autobild’s rendering of the new Q5 suggests that the fascia of the SUV will get more angular and chiseled and exude more aggression. The corners of the Audi grill will be more sharply angled, the headlights will be slimmer and wider and the bumper will have bigger, more imposing side air dams. If the rendering is to be trusted, the radiator grille will also lose its chrome bars in favor of a more aggressive looking all black treatment with the four rings sitting in the upper half.

The first car to officially adorn the new, more aggressive look similar to the Q5 will be the Q7 which will make its debut by the end of this year. The 2016 Audi Q5 will be the second generation evolution of the immensely successful Q5.

Powering the next gen Q5 will be a whole array of engines and will have more powerful and less polluting versions of the current engine lineup on them. A few new options may also be introduced.

Stay tuned for more news on this middleweight premium SUV. Check out our review of the Audi Q5 here.