We have been reporting in details about the upcoming compact sedan from Ford. This soon to be launched model is being developed for emerging markets like that of India and Brazil and would rival models like the Maruti Suzuki Swift Dzire, Honda Amaze and the upcoming Hyundai Grand i10 compact sedan. In a recent development, a report has emerged at ACI, which says that the upcoming compact sedan from the popular American car maker will make its global debut at the Auto Expo 2014. The Ford Ka compact sedan is likely to go on sale towards the end of this year/early next year.  CLICK HERE to read about all the 40-odd cars that are headed our way in 2014 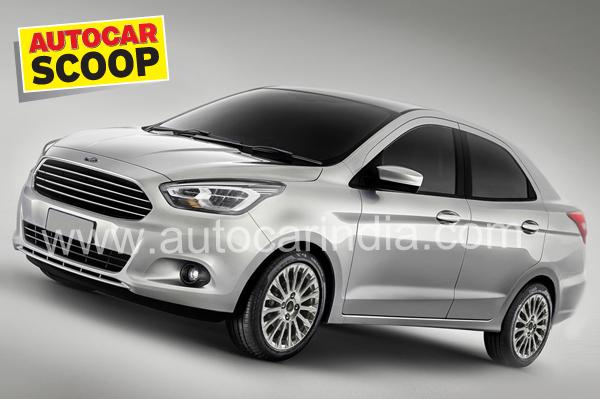 This four door sub four meter sedan will be the star for the American car maker at the Auto Expo. The production version of this compact sedan is actually sedan version of the next-generation Figo (Codename: B562), and will act as a replacement for the Fiesta Classic when it goes on sale in 2015.

The upcoming Ford compact sedan will be underpinned by the same B2E platform as the Ford Ecosport. Powering the car will be the 1.0-litre EcoBoost petrol motor and the 1.5-litre DV5 turbo-diesel motor. The car could come with new age technologies such as Powershift dual-clutch automatic transmission, SYNC infotainment system, EPAS (power steering), push button start, etc.

As we mentioned above, the upcoming Ford Ka based compact sedan would come to us in late 2014 or early 2015 and is likely to go on sale at a price that will be at par with those of the Japanese and Korean rivals.