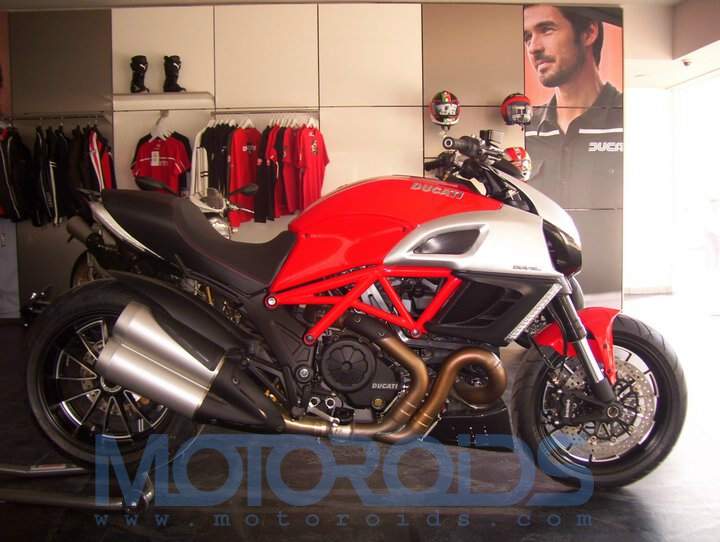 We all knew that Ducati was going to bring the Diavel to India. Now we have proof that the bike is indeed going on sale in the country. What you see here are the pictures of the to-be-launched Diavel in Red and black. The Ducati Diavel will be available in base and Carbon S variants in India. Expect the new bike to be launched by April 2011. The Carbon S, which is an all black bike, will cost more than the base model. While there has been no official word from Ducati on the prices of the new bikes, we expect a tag of Rs 17-19 lakh for the base variant and Rs 20-22 lakh for the Diavel Carbon S variant.

The Diavel is powered by a 1200cc 90 degree V-twin producing 162bhp of peak power and 127Nm of peak torque. The 207kg bike has massive street presence and is currently on the wish list of all big-bike connoisseurs.

What we also see in the background are the pictures of the Ducati 848 EVO and the Multistrada. Ducati India had earlier shown the willingness to launch the 848 EVO and the 1198SP in the country. Of the two, we can see the 848 EVO in the background, with the Multistrada also making an appearance. Does that suggest that the 848 EVO is also going to be launched along with the Diavel. Well, we cannot be sure whether it’s going to be launched ‘along’ with the Diavel, but it couldn’t be here only for show. it’s indeed going to be launched if it’s here. What we cannot see, though is the 1198 SP, the other bike that Ducati said it will bring to India. We are not sure if there has been a soft launch of the two bikes here in India, but as far as we know, they’re still not on sale.

Here’s the specifications sheet of the Ducati Diavel. Check out more images of all the new Ducati bikes in the gallery at the bottom of the post.