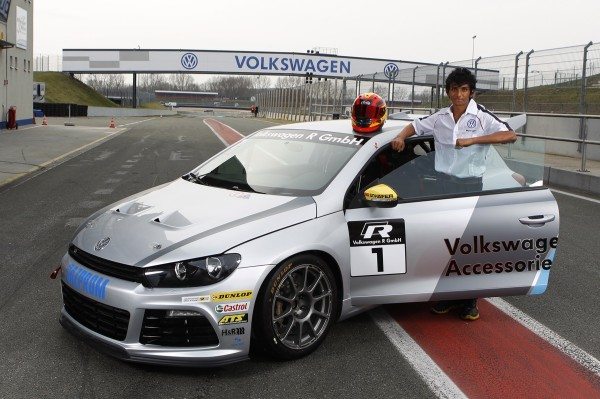 Volkswagen Polo R Cup 2012 Pro Category winner and India’s entry for the 2013 season of Volkswagen Scirocco R-Cup, Sandeep Kumar, is getting all geared up for his debut in international racing. The Chennai lad has already undergone a five-day physical fitness training at Oberjoch in Bavaria, Germany and faced the competition at pre-season testing held at Oschersleben.There are 19 young and talented drivers, including Sandeep, from eleven different nations.

Sandeep will be rubbing shoulders with experienced motor sport legends and celebrity guest racers through the season. Scirocco R-Cup cars is a one-make series. Besides being more powerful and faster than Polo R Cup cars, Scirocco R-Cup cars have a unique feature – Push to Pass. The innovative push-to-pass system makes things even more exciting. When engaged, it increases the charging pressure of the turbocharged Scirocco engine and raise the output by 50 hp. This system offers the drivers numerous tactical options – and the onlookers spectacular motor sport action with thrilling manoeuvres.

The first round of Volkswagen Scirocco R-Cup 2013 will be held at Hockenheimon on 4th and 5th May 2013, where Sandeep will make his debut on the international racing scenario. With a total of nine races at five challenging circuits in Germany and Austria, the 2013 season is going to be an exciting one for the Chennai-based racing driver.

An excited Sandeep Kumar said, “The preparations have gone very well. The fitness camp was totally different than what we have in India with a lot of outdoor exercises, especially in the snow. The pre-season testing was a good opportunity to learn anew track and get a feel of the Scirocco R-Cup racecar. I hope to carry my pre-season testing performance into the first race at Hockenheim and improve the pace there onwards.”