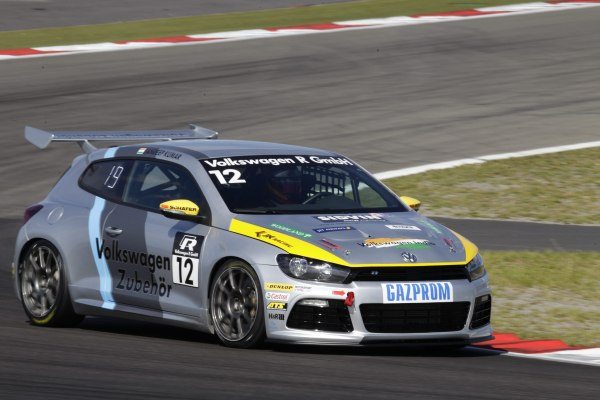 Kelvin van der Linde took fourth consecutive win at Scirocco R-Cup 2013 during Race 5 at Nurburgring and strengthened his lead in the championship. Kelvin’s compatriot from South Africa Jordan Lee Pepper bounced back to win the reverse grid Race 6 during the weekend. Meanwhile, Sandeep Kumar continued to improve his performance as he secured his best finish so far in Race 5 with 8th place in the Junior Category (12th overall). While Race 5 was a successful outing, proceedings of Race 6 didn’t go as expected with a 12th place finish in the Junior Category (16th overall).

Scirocco R-Cup moved to Nurburgring for Races 5 and 6 of the 2013 season. After qualifying in the 11th spot on the grid for Race 5, Sandeep dropped down to 14th on lap 1 and then to 15th on lap 2. He made a comeback on lap 3 and by lap 7, got into the 12th position. However, on the same lap, German driver Lukas Schreier, left the track after a failed overtaking maneuver against Luca Rettenbacher and rolled several times before coming to a standstill on the edge of the rack in a demolished car. Schreier walked out of the car unaided but the race was suspended. Sandeep was running 12th overall and 8th in Junior Category at that point of time and that was considered as final result, which happened to be the best so far in the season. At the front, South African driver Kelvin van der Linde continued his top form and clinched his 4th consecutive victory of the season. Mikaela Ahlin-Kottulinsky from Sweden took the 2nd spot while Kasper Jensen from Denmark came home in 3rd.

For Race 6, with the reverse grid starting order, it was the Junior Category driver Jordan Lee Pepper on pole who managed to take the best start and led the race from start to finish. With his first victory of the season, Jordan now stands on top of the Junior Category championship table and 2nd overall. Manuel Fahnauer from Germany crossed the finish line in 2nd while 7th place starter Kasper Jensen made steady progress through the race to finish on the final spot of the podium. Race 6 didn’t go well for Sandeep Kumar on the other hand. Starting 12th, he moved up to position 10 by the end of lap 2. However, he was then pushed back into 13th spot on the next lap and then into 14th on lap 4. It turned out to be even tougher for the Indian driver who further dropped down a couple of places towards the end of the race and finished in 16th position.

After Races 5 and 6, Kelvin leads the ch0061mpionship with 228 points while Jordan is in a distant 2nd with 168 points followed closely by Manuel Fahnauer in 3rd with 152 points. Sandeep Kumar stands 16th overall with 64 points and 11th in Junior Category with 95 points. Scirocco R-Cup will now move to Oschersleben for Race 7 and 8 from 13th to 15th September.