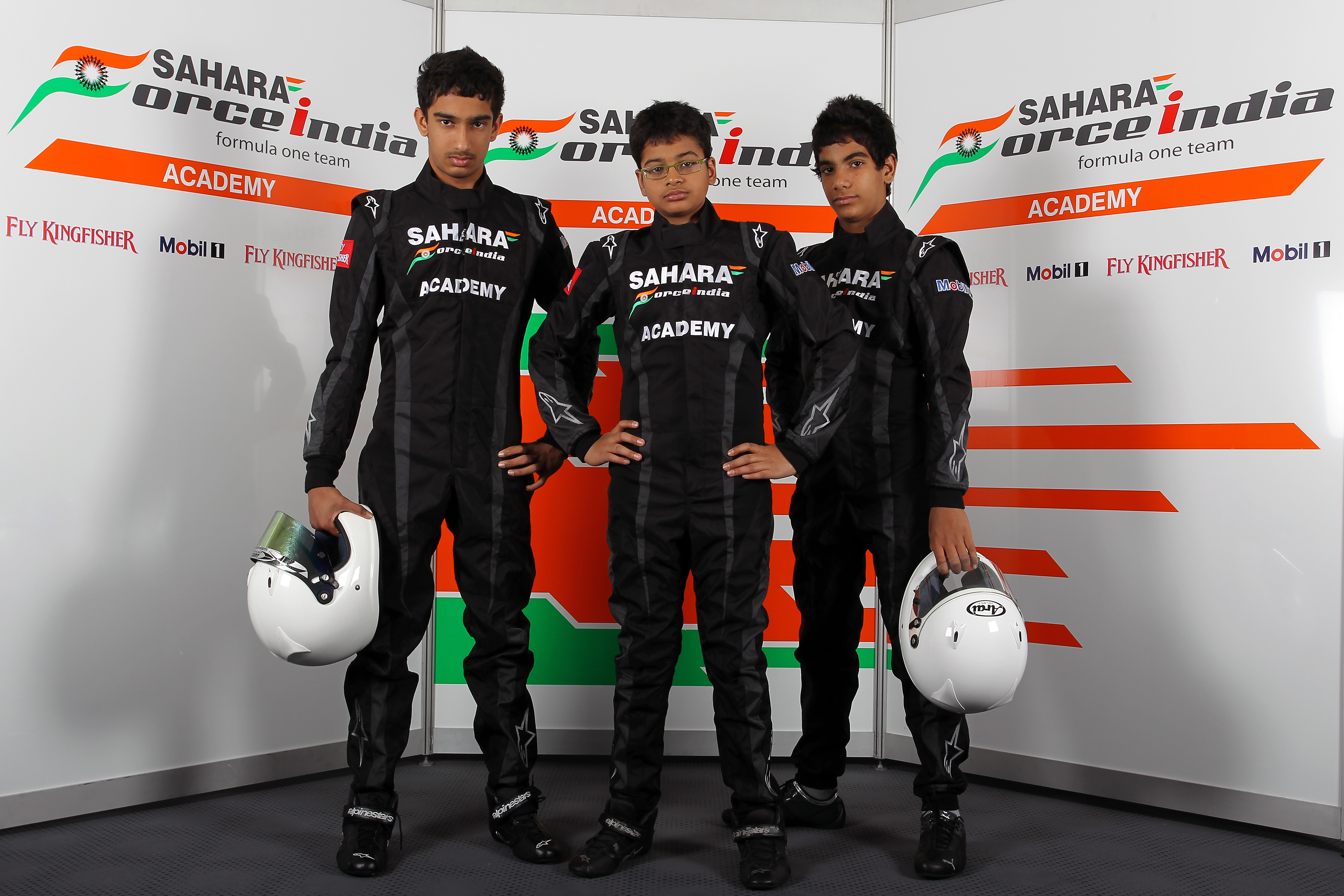 KF3 is an international CIK class using a medium power 125cc water-cooled engine with an electric self-starter and centrifugal clutch. With a standard chassis, single rear brake and bodywork, the karts are capable of producing speeds of up to 115km/h. It’s the ideal proving ground for aspiring racers and has helped produce numerous Formula One stars, including current Sahara Force India racer, Paul Di Resta.

Arjun, Tarun and Jehan’s 2012 KF3 Academy programme will be managed on behalf of Sahara Force India by Ricky Flynn with karts painted in the familiar colours of the Indian flag. They will have legendary kart champion, Terry Fullerton, as their mentor and driver coach, while Louis Di Resta, father of Paul, will help coordinate the project. Together they bring vast knowledge and experience of karting at the highest level.

As the winners of the One From A Billion hunt, Arjun, Tarun and Jehan all carry high expectations on their shoulders. The Academy initiative was designed to identify and nurture young Indian talent to prepare them for careers as future Formula One drivers. Having impressed the judges with their driving ability, fitness levels and media skills, the three teenagers now have the chance to race in one of the most competitive karting championships in Europe.

Dr Vijay Mallya, Team Principal and Managing Director of Sahara Force India: “Last year we started the search across India and identified three extremely quick and hungry youngsters who now have a great opportunity ahead of them. With a comprehensive development programme mapped out, the Sahara Force India F1 Team Academy will continue to nurture their talent as they take the first steps on a journey that will hopefully lead to Formula One. I will watch their progress with great anticipation.”

Nico Hulkenberg, Sahara Force India race driver: “I was one of the judges during the team’s talent hunt last year and saw the kids through every stage of the competition. All three have impressed me with their speed and commitment, so I think they have the potential to go a long way. I started out in karting when I was seven years old and I believe it is the best preparation for a career in single-seaters. The UK is well known for having some of the best karting championships around so it’s an ideal proving ground for the boys.”

14-year-old Arjun Maini was the winner of the One From A Billion hunt last year. Originally from Bangalore, he has six years of karting experience under his belt having competed in India’s Rotax Championship. As a keen sportsman he also excels at table tennis.

Tarun Reddy is also 14 years old and lives in Chennai. Like Arjun, he has raced in the Rotax Kart Championship and enjoys keeping fit by playing sports including squash. Having impressed the judges with his speed and determination last year, he was selected as the first runner-up of the One From A Billion hunt.

Jehan Daruvala is the youngest of the three Academy racers at just 13 years of age. A resident of Mumbai, he has karted extensively over the last three years and raced in the CIK FIA World Championship last year. An impressive performance in the finals of the talent hunt saw the judges award him the position of second runner-up.

The first round of the season took place at PF International Circuit near Grantham in Lincolnshire last weekend. In mixed weather conditions the boys were unable to break into the top ten of the final, but gained valuable experience of racing in the wet – their first race in such conditions. The boys will look to deliver a more competitive showing in the remaining six rounds of the series, starting at Whilton Mill Circuit near Daventry, UK, on 12th of May.