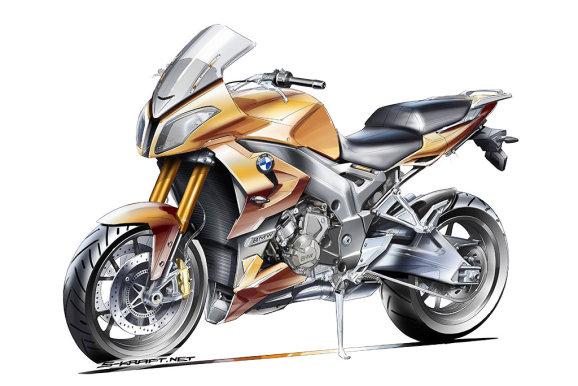 Rumours have been flying all the way from Deutschland that BMW Motorrad are planning to take the Ducati Multistrada 1200 head on with the new BMW S1000F. Courtesy of German magazine Motorrad who have published a sketch of the motorcycle created and signed by Stefan Kraft of S. Kraft Design and Illustration, citing that BMW would be readying the S1000F by the end of this year for an early 2015 launch. Resembling a touring clone of the S1000RR albeit with symmetrical lights, the S1000F would be powered by the inline four cylinder engine of the S1000RR, but rather be detuned from the shattering 193 bhp figure of the Bavarian blaster to a more sedate 150 bhp. The altered state of tune would give the S1000F more road-friendly trait than the track oriented nature of the S1000RR.

Expect the new BMW S1000F to sport sophisticated set of electronics as the S1000RR viz. electronic ride-by-wire, suspension DDC (Dynamic Dumping Control System) that made its debut on the BMW HP4, traction control, ABS and a variety of engine maps considering it would be handling varied terrain just like the Ducati Multistrada. In fact it’s not only the Italian rival, but the new BMW S1000F might well lock horns with Japanese offerings such as the Suzuki VStrom which has recently been given technological upgrades to battle against the European counterparts in the touring segment.

The BMW S1000F sketch indeed does look neat and proportioned, and certainly more close to the production model than an outlandish concept design. Goes for saying “there is no smoke, without fire” and we hope that the S1000F makes its way to the real world.