Home News Royal Enfield’s Café Racer based on UCE500 to be launched in 12-18 months! 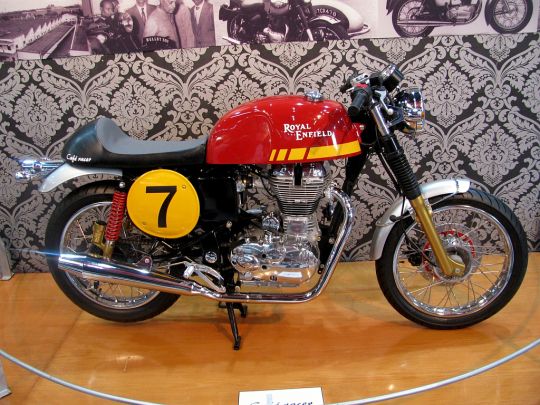 A Café Racer model based on the UCE500 engine was showcased by Royal Enfield at the 2010 Auto Expo in Delhi. However, enthusiasts weren’t very much pleased when they came to know that the model was one-off and would not hit the streets. But in order to please the enthusiasts, RE importers like Watsonian Squire of the UK and Classic Motorcycles of USA have been selling Café Racer kits that included an extended fuel tank, revised handlebars and rear set control levers and foot pegs for a sporty riding position.

The Café Racer model from the Royal Enfield factory is expected to hit the streets by 2013 after RE manages to clear out the production capacity tensions that are currently prevailing. With a new production facility being set up over 50 acres of land near Chennai, the CEO of Royal Enfield Dr Venki Padmanabhan describes the new Café Racer motorcycle from RE as a no-excuses, world class factory with top notch quality.