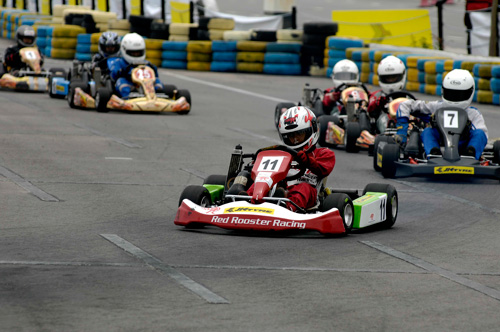 The first two rounds of the JK Tyres Rotax Max National Karting Championship was held in Hyderabad and Kolhapur. The Round 3 & 4 of the event will be held at the Kari Motor Speedway in Coimbatore one after the other from 20th, August to 22nd, August.

Status of the event after the first 2 rounds (top 3):

Jehan Daruvala of Rayo Racing from Mumbai leads the championship with 175points in the Micro Max category. Not much away from him is Bangalore’s Abhirath Shetty of Team Red Rooster Racing with 167 points and Krishna Mahadik a privateer with 165 points. Raj Bharath of Meco Racing leads with 174 points in the Junior Max category with Bangalore’s Arjun Maini of team Red Rooster Racing following him with 171 points. At the third place stands Shashank Shankar of Amaron Racing with 167 points. Kolhapur racer Parth Ghorpade of Team Amaron Racing is on the apex of the senior category with 171 points closely followed by Chennai’s Vishnu Prasad of Team Meco Racing with 169 points. Nikhil Kashyap of Amaron Racing with 159 points, stands at the third place.

N. Leelakrishnan, Chief Technical Director at Red Rooster Racing said, “With both the rounds taking place on consecutive days, there will be a lot of pressure on both the drivers and the technical teams. At the end winner will be the one with focus and patience.  We have ensured that the Karts are in the optimum condition. I am confident that the boys will put in that extra effort required to be on the podium and to win the championship title.”

The championship’s final round will take place at the Kartainment track in Hyderabad this September.