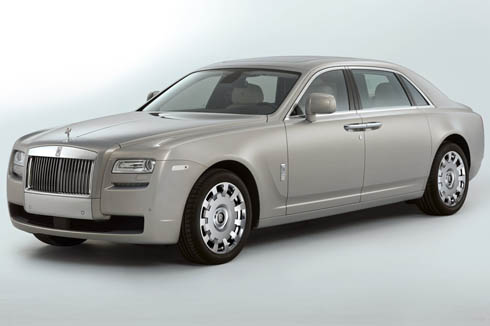 At the current Shanghai Motor Show, Rolls-Royce unveiled a new model in their current Ghost lineup. The Added Model is a little stretched version of the Ghost named the Ghost Extended Wheelbase (EWB).

The Ghost EWB gets similar treatment as its sibling the stretched Phantom. The Extended Wheelbase proves to be a boon to the back seat passengers generally the owner by adding that extra sweet leg room.

Talking in terms of numbers the knee-room for the back seat passengers has increased from 160 mm to an amazing 330mm, which is more than double. Other added features will include the panoramic sunroof which is a standard in the model. With a huge sunroof it invites a lot of pleasing light in the cabin making the back seats a pleasant place to be. There is a new set of alloys given to the wheels.

With its long wheelbase the new Ghost will be one of the most luxurious places to be in.  Production will go on later the year and the cost is expected to be least 20 per cent more than the non EWB model.