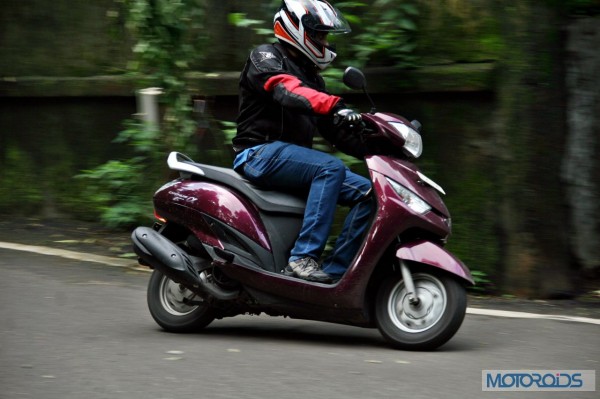 Once upon a time, the word Yamaha was defined by a 100cc 2-stroke machine which would leave a white cloud of smoke behind as it sliced through the traffic. People would ride the 2-stroke Yamaha RX100 and RX135 with joy and pride. But with changes in government policies and more efficient 4-stroke engines making way into the market, the RX100 and the RX135 lost their glory and began to fade out of the market. The company responded with products like the Libero, Fazer, Alba and Crux, but it tasted some real success again only in 2008 onwards when it introduced the R15, FZ, FZ16 and the new Fazer. The bold unconventional styling of the FZ-series and the cutting edge technology of the R15 in the 150cc segment worked well for Yamaha.

But the company soon realised that it has to venture into the growing commuter scooter segment in order to improve its sales. This led to the introduction of the Yamaha Ray and Ray Z into the Indian market in 2012. Well finished, and competitively priced, the two products have been doing fairly well in their segment. Now, the third offering from Japanese two-wheeler manufacturer in the commuter scooter segment is the 113cc single–cylinder, 4-stroke scooter which is targeted at the typical Indian family guys, the Yamaha Alpha. But don’t be fooled by the conservative looks of the scooter. There is more to the Yamaha Alpha than what meets the eye. 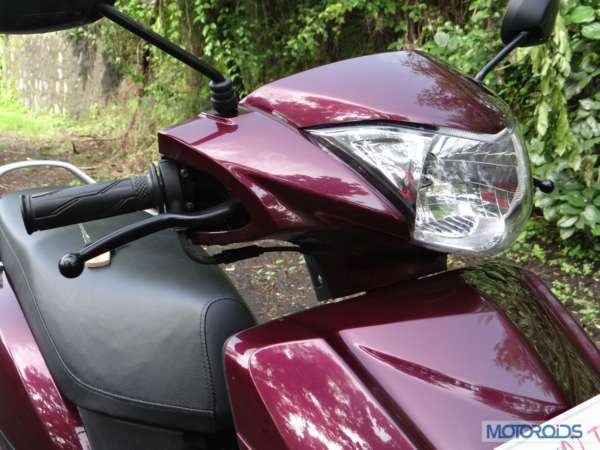 If the Yamaha Alpha were a real person, it would have been one hell of a poker player! On the very first look, the Yamaha Alpha looks like any other 110cc scooter. But crank up the engine and pull the accelerator and you would notice the difference right away. This is definitely not a scooter that would stick to the leftmost lane on city roads. And, with body weight of 104 kilograms with full tank of fuel, the Yamaha Alpha feels quick and ridiculously easy to handle. We rode the Alpha for almost 150 km in and around the city and got dozens of photographs to get you an exhaustive review of this latest offering from Yamaha. Let’s have a more detailed look at the strengths and weaknesses of this family oriented scooter from the Japanese bikemaker.

Next page for Styling and Comfort>>> 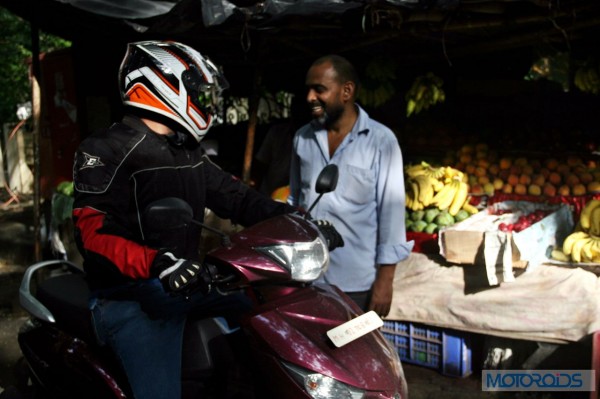 Although the Yamaha Alpha is based on the same platform as the Ray and Ray Z, it is not as flamboyant as the two. Yamaha decided not to try anything overly unusual in terms of looks with this scooter. So the Alpha looks like your regular 110cc commuter scooter with its headlight attached to the handlebar. Turn indicators too are conventional units, placed on the front apron with a Yamaha logo placed between them. The front apron features two vertical creases that merge into the inner ends of the blinkers. The blinkers are positioned at the ends of two narrow slits, at the center of which you have the Yamaha emblem. The bottom end of the apron extends outwards in a wing-like fashion to lend a bit more purpose and aggression to the front. The exhaust looks neat and the heat shield does its job rather well. The riding stance is upright. You feel comfortable riding the Alpha even on longer than usual rides thanks to the longest in class and well cushioned seat. The handlebar grips are soft and offer good cushion to the palms and fingers against the rattling potholes, peppered generously on Mumbai streets.

In terms of dimensions, the scooter is not too wide which makes it more comfortable even for the pillion. The pillion grab bar is well designed and provides good grip at high speeds. Keeping an eye on the traffic behind you is fairly easy thanks to the well placed mirrors. The instrument panel provides necessary information and comprises of analogue speedometer, odometer and fuel gauge meter, turn-indicator signal and high beam indicator. 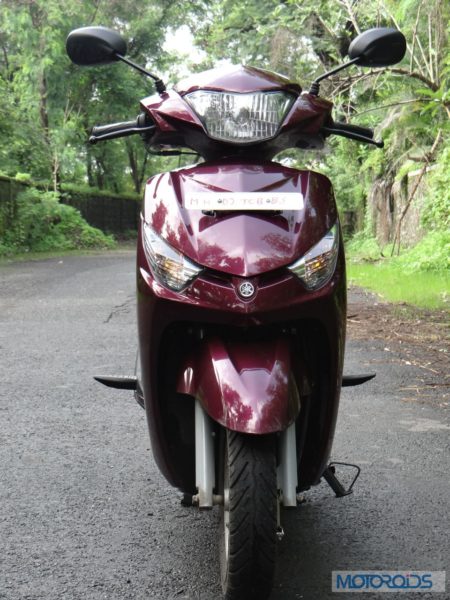 From the side view, the Yamaha Alpha appears longer than any other scooter in the segment. The two-tone side panel gets a unique styling cue in form of sharp lines which go all the way to the tail mounted turn indicators, giving the scooter a sharp, front forward look. The Alpha also gets the largest under-seat storage at 21 litres. The huge storage space can be utilised for carrying articles such as a lunch box, documents, fruits and vegetables or a handbag. And if the storage space is not enough, you have a hook under the seat near the foot-board which can be used to hold the straps of a carry bag. The overall build quality of the Yamaha Alpha is good. The paint job is done well and so is the sticker work.

What does not work too well, however, is the design of the storage space which, despite being the largest in the segment, fails to store a proper full face helmet. The absence of the parking brake lever gets irritating, especially on slanting surfaces, where you have to make an extra effort to get the scooter parked. We also feel the tail section of the scooter could have been designed better. The placement of turn indicators above the tail light does not look very appealing. Instrument cluster needles also could also have been better designed. Lower portion of the speedo needle, below the hub blocks the view of the ODO meter as the speed crosses the 40 km/h mark. The scooter also misses out on backlit display for the instrument cluster and it’s the light from the headlamp that illuminates the instrument cluster. 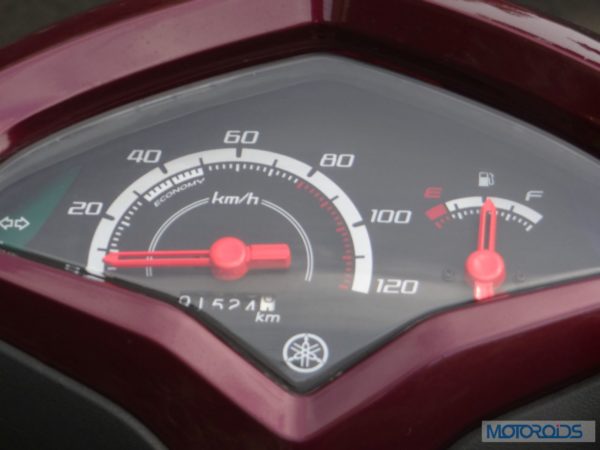 The engine is one of the strong points for the Yamaha Alpha. The 113cc unit on the Yamaha Alpha is the same as the Ray. This butter-smooth engine puts out 7 bhp of power 8.1Nm of torque, which may not sound like a lot on paper, but in practice feels peppy, giving the Alpha the capability to propel from naught to 60 km/h in about 11 seconds. To put things in perspective, even the much lighter and more powerful Scooty Zest takes slightly longer to reach that mark. The power, clubbed with the light body weight offers easy handling. Maneuvering the scooter in traffic is as easy as it gets. The Alpha is well planted even at speeds around 70 km/h. On the highway, we managed to clock 93 km/h (speedometer indicated) on the scooter. After revving it hard on highways and some easy riding in the city, we were able to get a fuel economy of 42kmpl from the scooter. Economy conscious everyday users should be able to extract an even better figure.

The stopping power on the Yamaha Alpha, with 130mm front and rear drum brakes, is pretty decent. The telescopic fork at the front and springs at the rear take in small to medium bumps and pot holes very well. The front 90/100-10 and rear 90/100-10 MRF Nylogrip tyres stick to the tarmac fairly well and give you confidence, not only on straight roads but also around the corners and on damp surfaces. 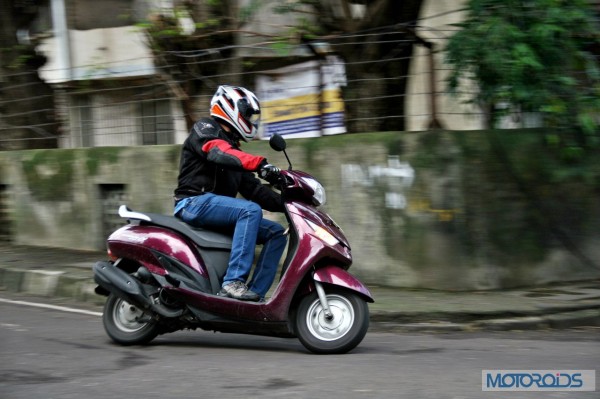 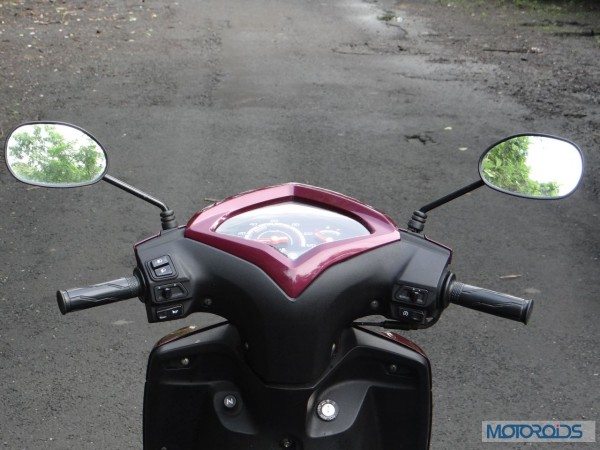 The handlebar is wide enough while the switches are easily reachable 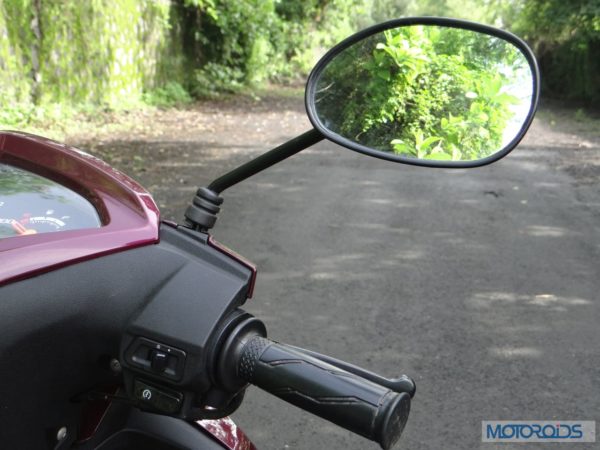 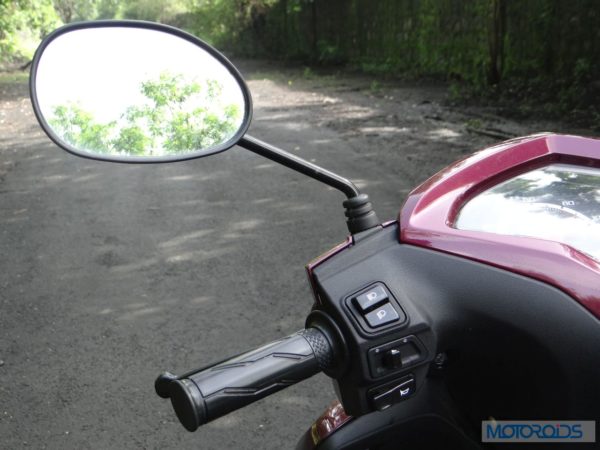 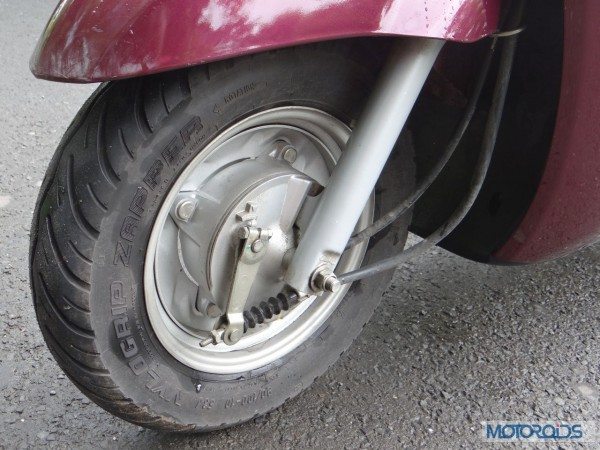 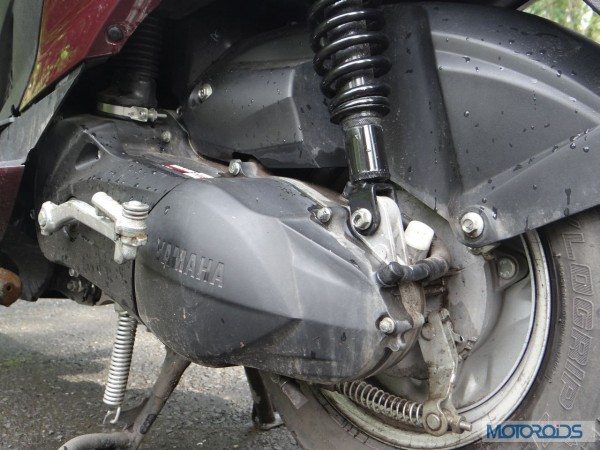 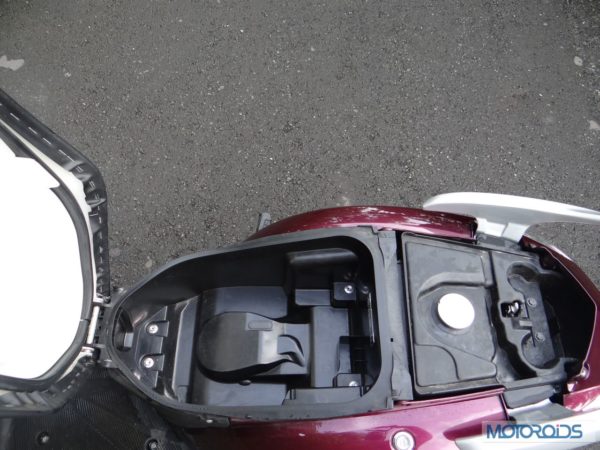 At 21 litres, the Yamaha Cygnus Alpha has got the largest boot space in segment. Unfortunately, the storage wouldn’t accommodate a full face helmet 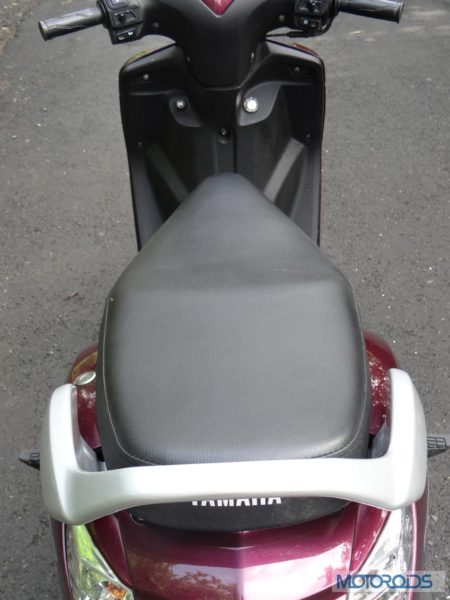 The Yamaha Cygnus Alpha also has the longest seat in the segment. It is well cushioned and comfortable 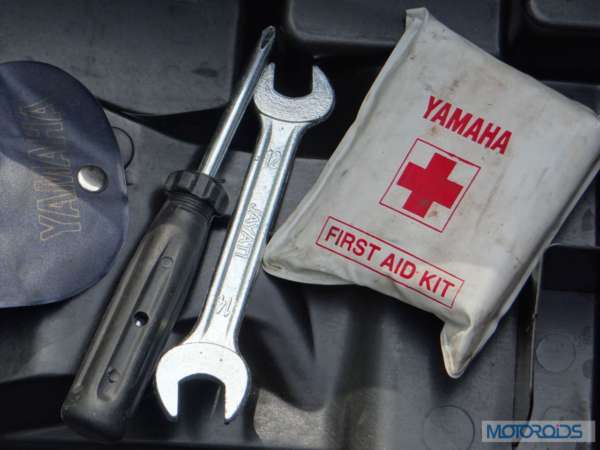 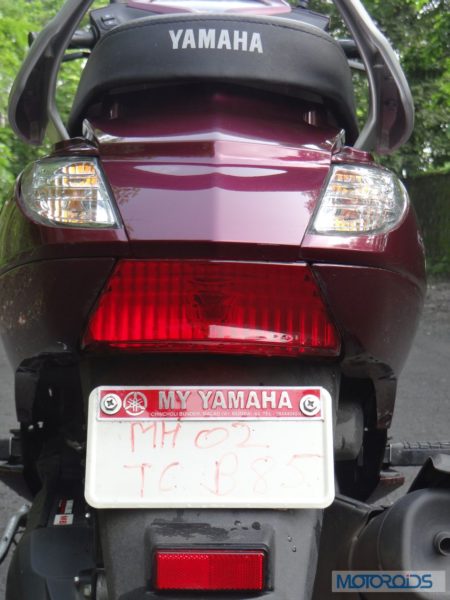 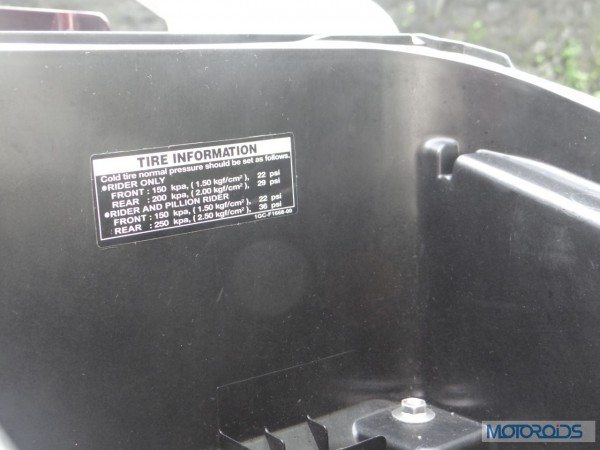 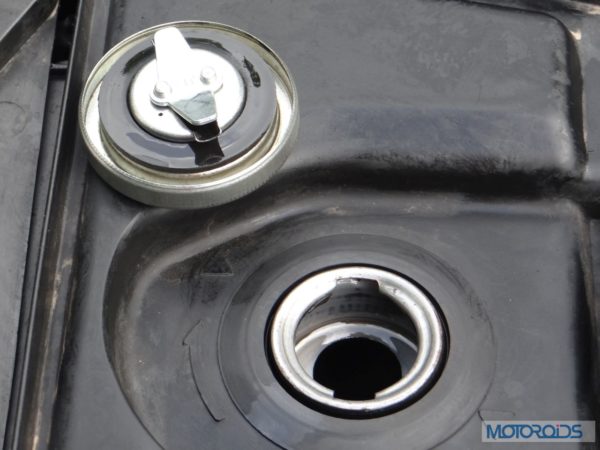 The 5.2 litre fuel tank and lid 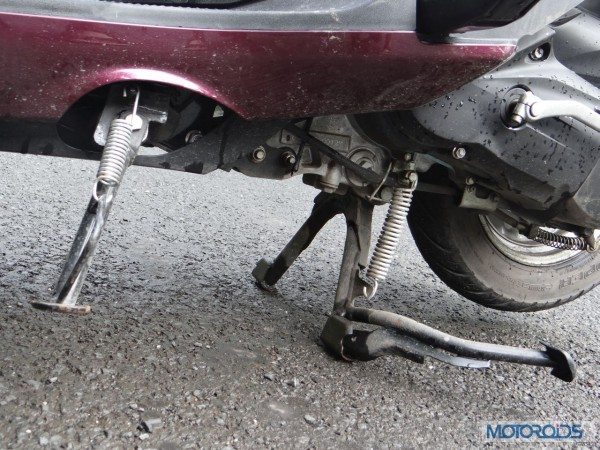 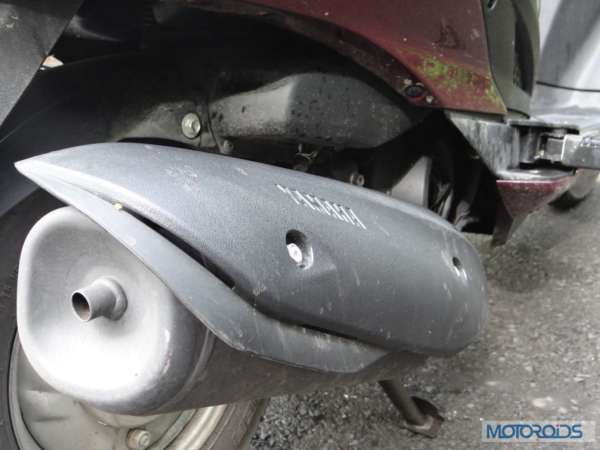 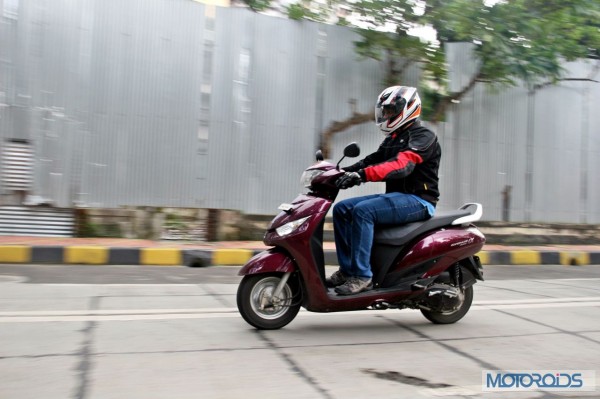 As we said earlier, the Yamaha Alpha is a versatile scooter capable of playing multiple roles. It can be used to commute to office, pick up kids from school, go shopping and for leisure riding.  Its fairly easy to ride, and can be used by the ladies for their short commutes as well. The huge 21-litre storage space comes handy to carry loads of stuff. The light body weight, peppy engine, well tuned suspension and soft seat make the Alpha a great city scooter while its appreciable composure at high speeds makes it fun on highways as well.

The Yamaha Alpha is fairly positioned against the segment leader Honda Activa and the new TVS Jupiter which are the immediate competitors to the scooter. Sure, there are a few niggles like the lack of brake lever clip and the missing key shutter but that is something that one can live with. Price, wise, at Rs 47,735 ex-showroom Delhi, the Yamaha Alpha is at par with the Honda Activa and TVS Jupiter, give or take a few hundred bucks. We must, however, mentioned here that you would have to pay extra for some accessories on the Activa, which come as standard on other scooters. In that sense, it has an advantage over the popular Honda scoot.

In all, the Alpha presents itself as a practical, comfortable scooter which does almost everything right. Its priced well and comes with the engineering prowess of Yamaha backing it. Do give this one a thought if you are looking to buy in the 110cc scooter segment.

A picture can speak a thousand words and so we got dozens of them to let you have a better look at the Yamaha Alpha. What do you have to say about it? Share your thoughts and opinions with us through the comments column below.