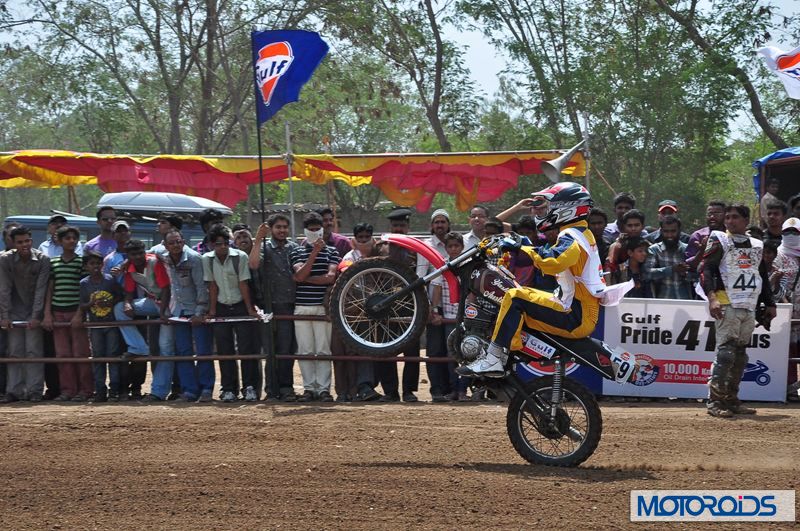 Arvind KP led the charge of Team TVS Racing riders in the second round of the Gulf Dirt Track National Championship – a round of FMSCI National Championship, at the Army ground on Railway station road, Aurangabad, on Sunday. Astride a TVS 250 FX, he beat back a strong challenge from his Bangalore TVS Racing teammates R Natraj and Pramod Joshua to emerge triumphant in the Foreign Motorcycles class for 250cc 2 and 4-stroke.

Arvind also won both the races in the Indian Expert class, astride a TVS Apache RTS, to emerge the most successful rider of the meet.   After Brigadier Shri Surender Pavamani flagged off the Sportscraft-organised Gulf Oil Corporation event, held under the aegis of the FMSCI, at 8:45 in the morning, the abovementioned trio, all astride TVS 250 FX, produced an awesome display of riding skills in the foreign motorcycles class, but Arvind came up with that wee bit extra to relegate Natraj and Joshua to second and third places respectively.

There were 192 entries in 14 classes of competition, and this second round of the popular Gulf Dirt Track National Championship, which was supported by Aurangabad Racing Organisation and Roadies Racing Association of Aurangabad, produced high class racing and entertainment.

Indeed, it was Arvind’s day out as he also dominated the Indian Expert class. He won the first race in the class rather easily, relegating his TVS teammate Pramod Joshua, also astride a TVS Apache RTS, to second place and Naresh VS, astride  Yamaha RX 135, to third place.

In the second race too it was a battle between Bangalore riders, only this time TVS Racing riders took the top three places – Arvind placing first, Madhu S second and Joshua third.

If Naresh VS lost out in the Indian Expert class, he stole the glory in the Private Expert class which also witnessed keen competition. His better judgment around the bends saw him win both the races for motorcycles upto 260cc. Aurangabad’s Rizwan Shaikh — and Pune’s Vishal Barguje placed second and third respectively astride Yamaha bikes.

In the second race of the event though there was a change in placings, with Aurangabad’s Shaikh Ismail and Bhopal’s Syed Asif Ali finishing second and third respectively behind Naresh.

If the country’s leading riders had the goodly crowd that turned up enthralled in the abovementioned categories, the Novice class provided more excitement and had the spectators cheering wildly.

The crowd that turned up was appreciative of the event and the riders too were all praise for Sportscraft’s conduct of it. The presence of 40 NCC cadets of Battalion 51 and senior Army officers who volunteered and ably marshaled the qualifying & the final round ensured all went about with precision timing. In the end, none had anything to complain about. Sportscraft did a remarkable job of conducting the event.