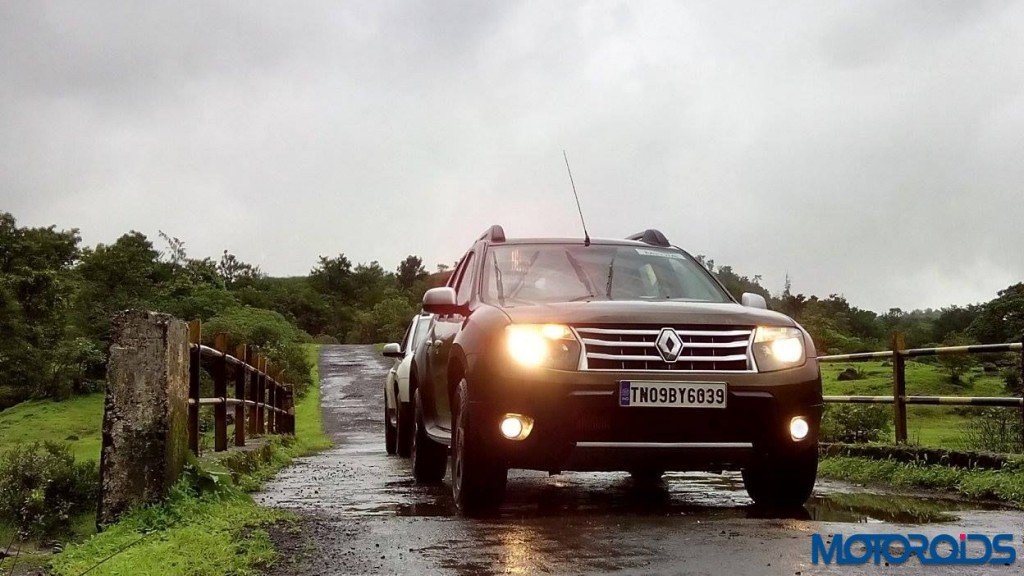 As stones ricocheted off the under-body, and the windscreen wipers struggled with the heavy rain, the Duster tackled the slushy, rough roads with grace, and pace. We were en route to Kolad from Aamby Valley, negotiating 110 Km of rain harassed state highways, strewn with loose gravel, standing water and slush. Lush green meadows strewn with shiny rocks gave way to cloud hugging mountains in the distance, as the “Gang of Dusters” made quick headway towards Kolad, disrupting the usual peace. Welcome to the Great Western Adventure.

What is the “Gang of Dusters”? 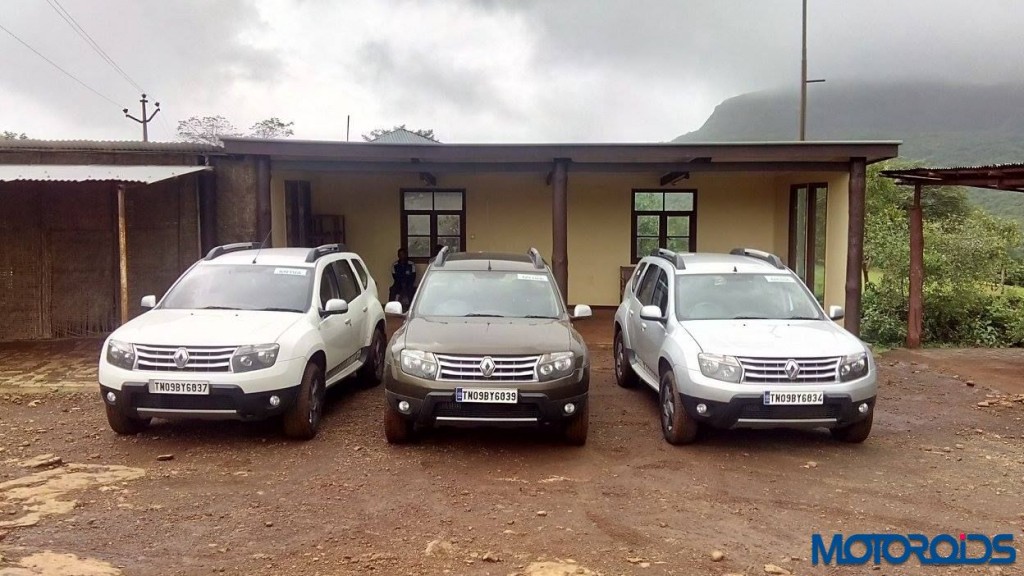 Spread over two days, The Gang of Dusters is a special initiative by Renault to bring together Duster owners with a passion for adventure. Traversing across some of the most breath-taking landscapes in India in the brand’s Duster SUV, the Gang of Dusters offers a great opportunity for like-minded driving enthusiasts to share a good experience.

Renault India flagged-off the fourth edition of its ‘Gang of Dusters’ initiative from Mumbai, which took place on 18th & 19thJuly, 2015. The Great Western Adventure drive saw over 40 enthusiastic Duster owners’ negotiating 500 plus km of adventurous, exciting and fun-to-drive terrain.

On day one, the gang drove to Aamby Valley where they participated in off-road driving and also other adventure activities. On day two, the Gang of Dustersdrove to Kolad for a day of rafting. Together with the varied road conditions that the route offered, Renault added off-roading, rafting and other thrill elements to make the drive challenging and exciting. 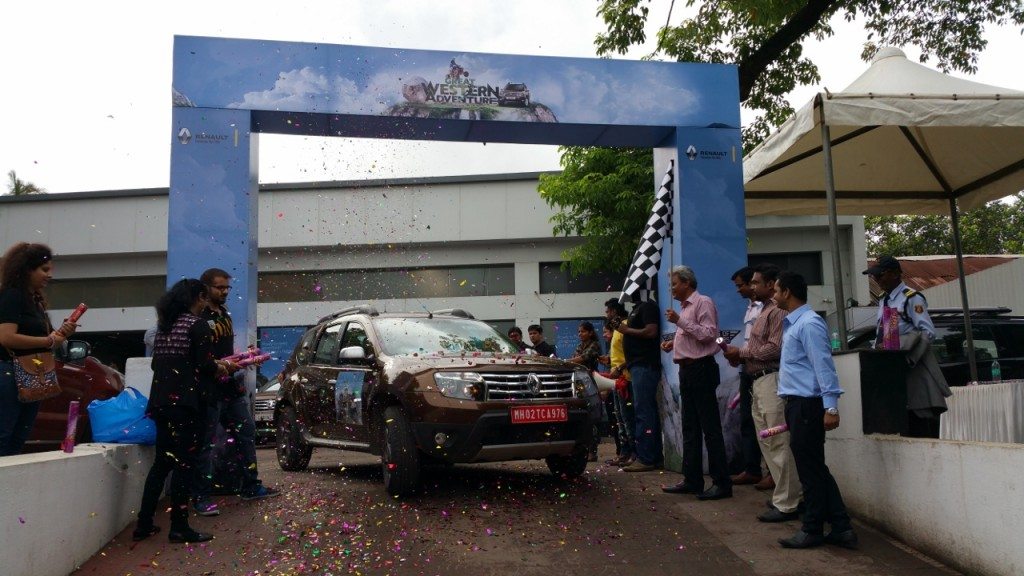 Day one started with the owners and media folk gathering early on a wet Saturday morning at Renault’s Joheshwari dealership in Mumbai. Breakfast and a small briefing later, the media got into their allotted cars, while the customers got into their own cars. The convoy was then flagged off. Close to 50 Dusters, including four media vehicles, heading for the hill station of Lonavala, home to Aamby Valley, made for a pretty spectacular sight. 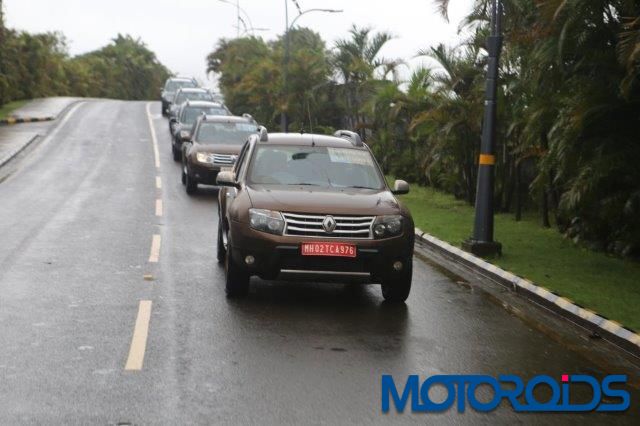 But since it was a long weekend, and revellers were headed out of town, we faced a lot of traffic on the roads. Undaunted, we pushed on, and reached a fog streaked, rain lashed Lonavala. The climb to Aamby Valley started, and post Lion’s Point – a popular tourist hangout, traffic started dwindling. Fog engulfed us, but the ambience was serene. The greenery was over saturated, and the black, shiny, twisty ribbon of road leading to Aamby Valley was bliss to drive on. 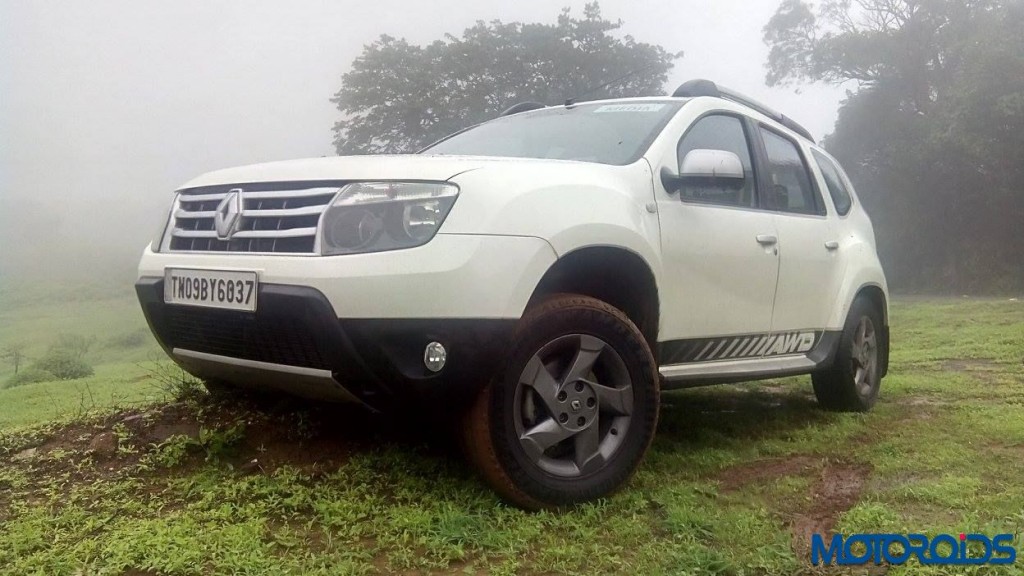 The Dusters were perfectly at home, with their capable driving dynamics, while the powerful K-9K, 110 PS diesel motor kept up the pace. Traffic woes forgotten, we enjoyed the short climb to the hilt and ultimately reached 19 Degree Noth, an area dedicated to adventure activities like rock climbing, zip lining and off-road driving. But having come in dirty Dusters, it was latter that we were interested in. 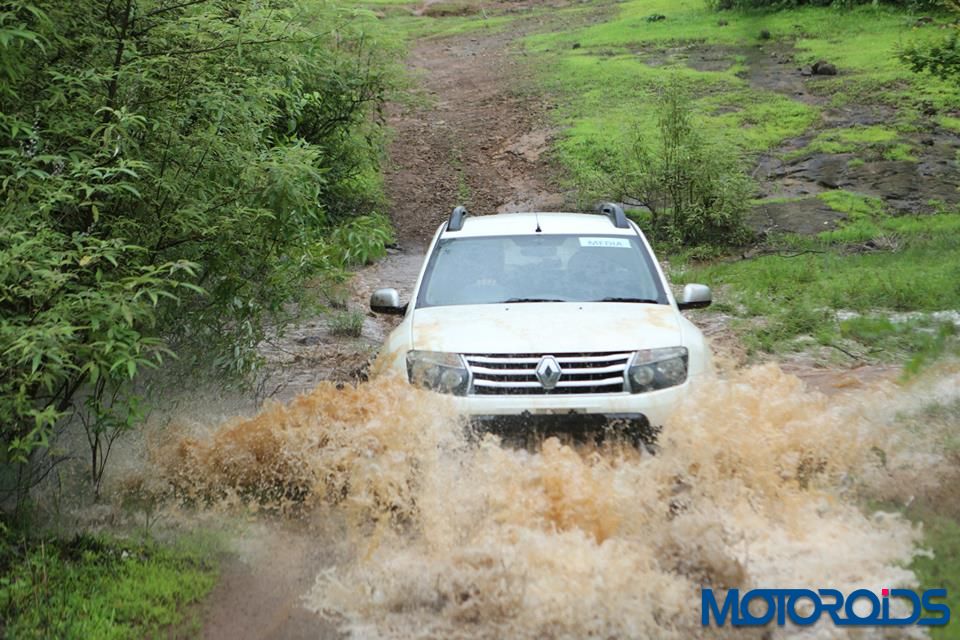 Some refreshments later, we hit the off-road track, strewn with medium sized ruts, puddles and rocks, all dappled generously in slush. The topography was nowhere close to what seasoned off-road enthusiasts would revel in, but for purely for a brief demonstration of the Duster’s rough road prowess, it deemed fit. 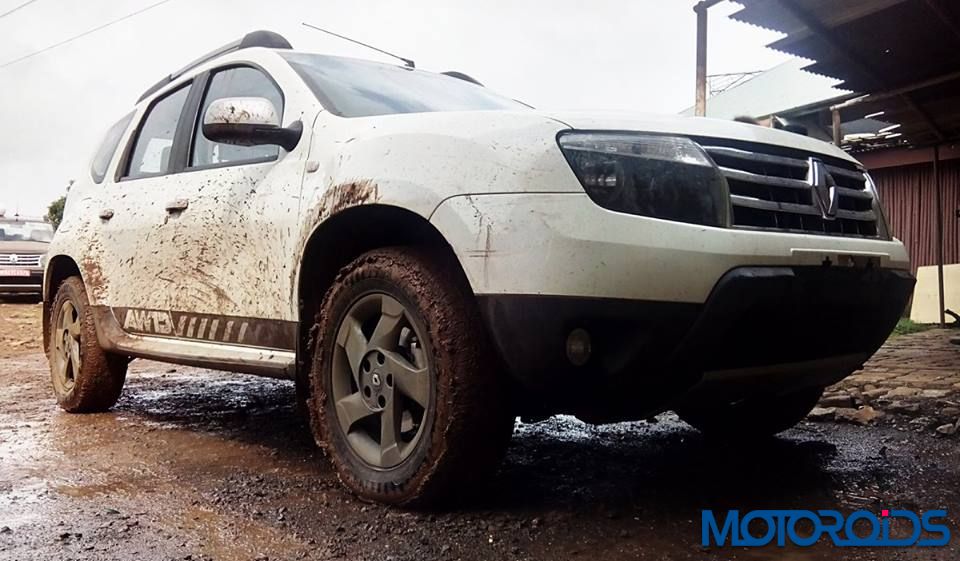 Piloting the Duster through the mildly treacherous course felt great, and it returned me memories of my stint with a LHD Willys Jeep long time back. The Renault is as sure-footed as a mountain goat, and aided by its short overhangs, engulfed the track with aplomb. Be it wading through knee deep water, or climbing up a 40-degree slope, the Renault didn’t even require us to flick the knob below the console to 4WD. 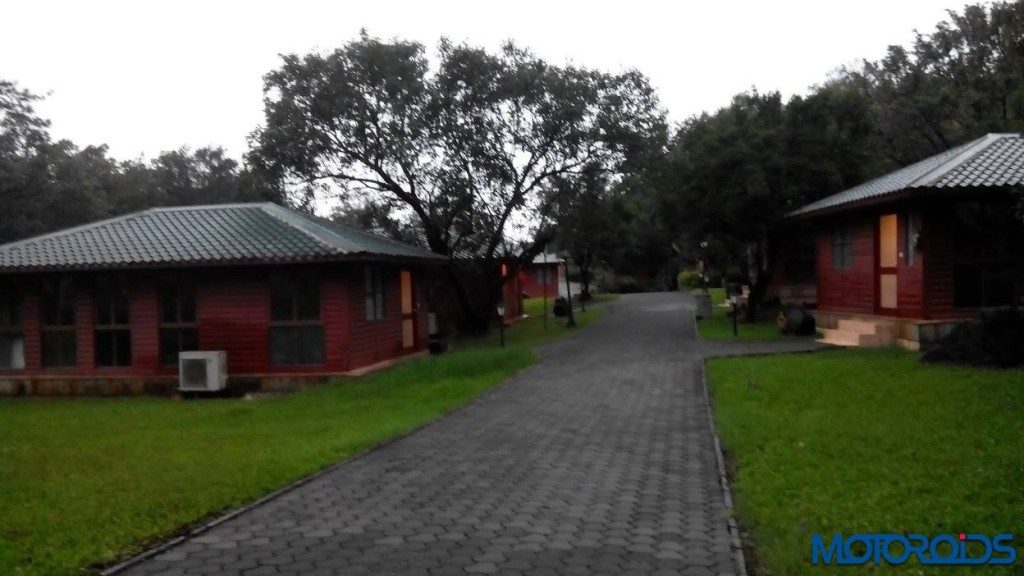 After the off-road event was done, we were shown our rooms. Nestled deep within a misty Aamby Valley city, we were put up in snug red cottages. Over dinner later in the evening, where the promised cocktails never came, we were briefed over the rafting that we were supposed to be doing the next day in Kolad. Post the briefs and entertainment, we hit the hay. 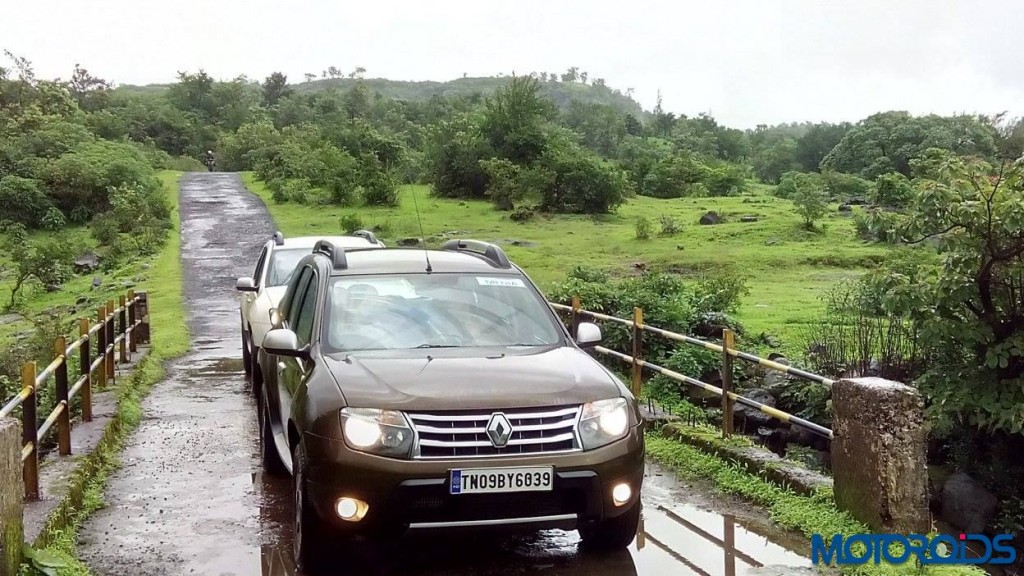 The Kolad village on the banks of River Kundalika is majorly known among adventure enthusiasts as one of the best places in Maharashtra for river rafting. During the grueling, adrenaline filled drive to Kolad from Aamby Valley, the Duster came into its own. It flattened earth, eating up gravel, slush and puddles, with the traction control busily flickering as we took air, or slid.

Even on tarmac, the Duster turns well for a SUV, with controlled body roll and confident grip. However, I wish that the seats were more supportive and held one in proper place when being driven spiritedly. A satisfying drive later, we reached Kolad, took a small breather, and geared up for the highlight of the day – rafting! 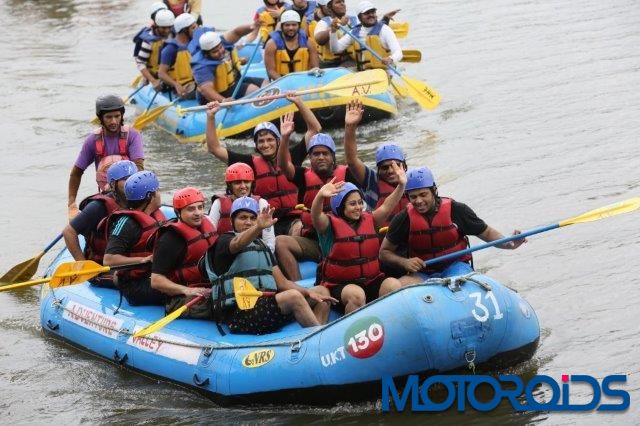 Now, I had never done rafting before, and an average swimmer’s low self-confidence notwithstanding, I climbed the dingy. We were divided into groups, and after a flurry of instructions later, we started out adventure. It was a fantastic, fun-filled experience, and we oared like mad men and women. The rapids were challenging, but after 12 Kms, two hours and sore arms later, we conquered the river. Famished, we were whisked off for lunch, and after that, we freshened up, and headed back to Mumbai. 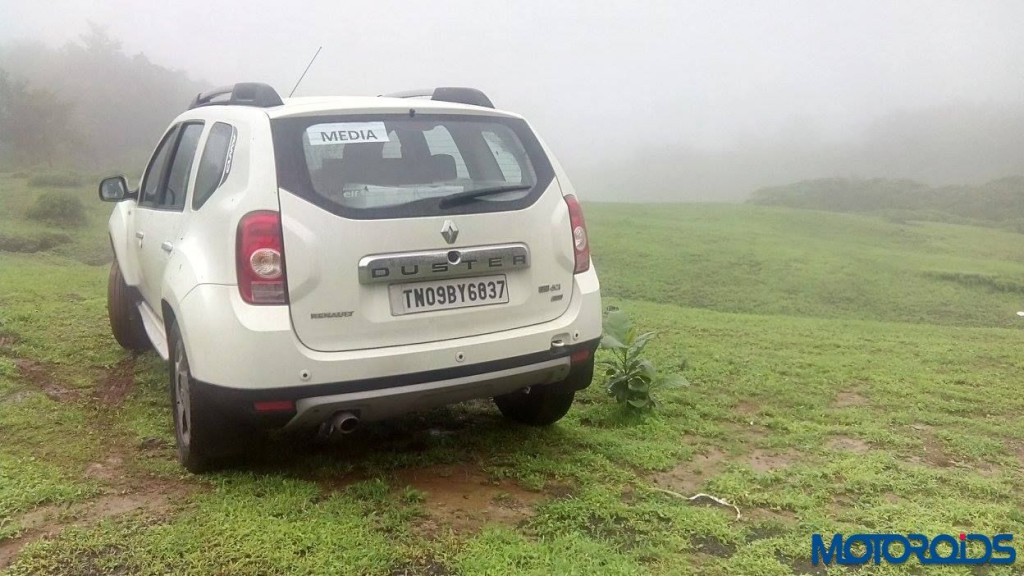 From Mumbai to Kolad, we further drove 117 kms, and on reaching, ended a fun-filled, adventurous sojourn. As I walked back into my building, I looked back at the Duster once and gave an appreciative nod. The Gang of Dusters initiative will continue with regular and similarly exciting expedition drives organized across India in the coming months. Stay tuned!