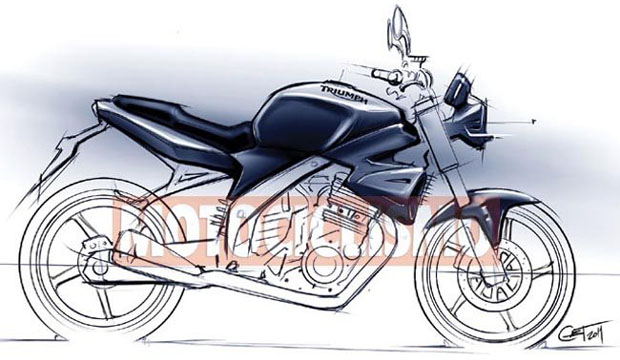 Discuss this topic in Motoroids Talks

What you see in this picture is an artist’s impression of what an under-development Triumph will look like when ready. Of late, we have been seeing some action happening in the long dormant 300-400 cc segment. Kawasaki er-4f, Honda CB300R, the upcoming KTM 350 and now this Triumph, all these new models spawning in quick succession is a hint.  Global bike makers have realized that they lack a product that suits developing markets like Brazil and India well.

European and American bikers who have grown up on 600cc and liter class machines would never let their egos get marauded by riding such small machines. Clearly these bikes make little sense for such developed markets. But countries such as ours have a great potential for such models, as we still don’t have many affordable options around. What’s more the kind of volumes that these bike can do in India alone, once the market evolves, could overshadow certain manufacturers’ sales across some continents.

The new motorcycle being developed by Triumph is important from the Indian point of view, as the company has recently announced its intentions to enter India officially. It’s notable that without having an affordable product in the Rs 2-3 lakh category, any company won’t be able to churn any considerable sales volumes. For all we know the new bike is being designed with the Indian, and maybe the Brazilian market in mind. The chances of this new Triumph making it to India along with the brand itself are very high if our understanding is anything to go by
.
The cubic capacity of the bike is not decided yet, but it would range anywhere between 267cc and 350cc. The engine would be a liquid cooled, four valve single. Triumph has a manufacturing plant in Thailand, from where it can ship CKD kits to Brazil and India for final assembly in smaller plants in both the countries. The new bike is expected to hit the streets by 2012. Don’t be surprised if you get to see a prototype of the bike at the 2012 Expo

With the Ninja 650R retailing for less than Rs 5 lakh, the Triumph 350 (if that’s the cc) won’t make sense for anything above Rs 3 lakh. With kits imported from Thailand and assembled locally, that price point should comfortable keep the British company’s India operations profitable if they manage reasonable volumes.