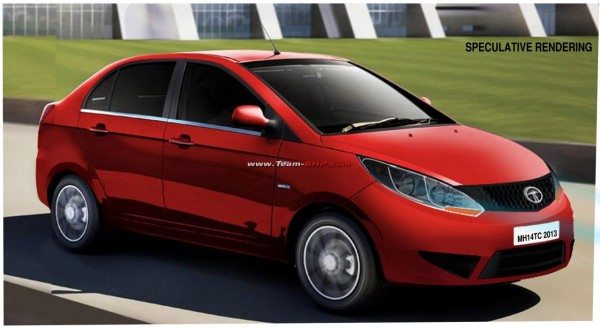 It is highly likely that the upcoming Tata Manza CS would feature Tata Motors’ new design language, which was seen on the Manza Hybrid in the 2012 Indian Auto Expo.

The Manza CS rendering shows that the car would come with a set of smoked headlamps, aggressively styled bumpers and a new grille, that would stretch from one headlight to another. Also, the rear end is likely to sport new taillamps and of course, a shorter boot.

Akin to the Indigo CS, the 2015 Manza CS would be less than 4 meters in length and hence, would be entitled to avail the excise duty benefits offered by the government on such cars. Worth a mention here is that the Indigo CS, which comes with new gen Tata engines, acres of rear legroom and is on sale at a really attractive price tag, has managed to put on a good show on the sales charts and has become a popular choice for taxi and fleet operators. It is being hopes that the Manza CS would benefit from similar values.

It is expected that the Manza CS would share its engine options with the Vista and the Manza. Which means that the diesel variant of the car would get the tried and tested Fiat sourced 1.3 liter Fiat Multijet turbo diesel engine, probably with a VGT.