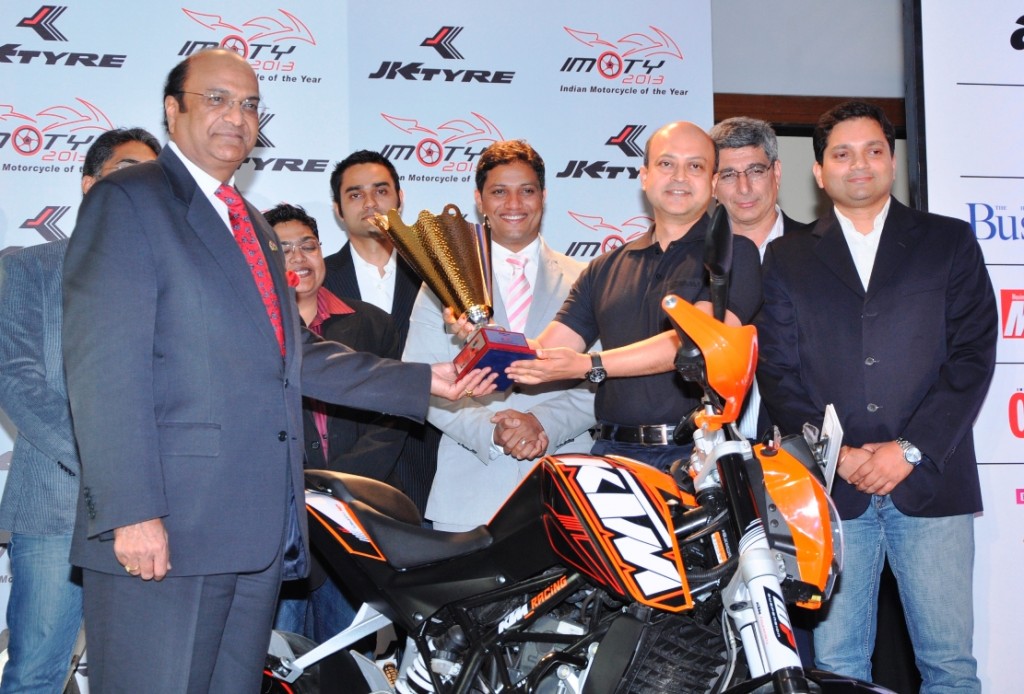 The ICOTY & IMOTY awards are the most credible and coveted award and almost like the ‘Oscar’ of Indian automotive awards. These awards are an expert and independent judgment of the best new car and motorcycle. They are aimed at recognizing focused, consistent, and rigorous efforts made by auto manufacturers, with the highest levels of performance in the areas of design excellence, innovation and R&D, and the awards have been gaining prominence with each passing year. JK Tyre has been associated with these awards ever since its inception.

It was a very close competition between the top three contenders in both the categories. Maruti Ertiga, Renault Duster & Hyundai Elantra were amongst the finalists for the ICOTY category, while the finalists for the IMOTY category included the Bajaj Pulsar 200NS and Discover 125ST, KTM Duke 200 and Honda Dream Yuga. The nominated cars and motorcycles were judged on various parameters such as price, fuel efficiency, styling, comfort, safety, performance, practicality, technical innovation, and value for money and suitability for Indian driving conditions.

Congratulating the winners, Dr. Raghupati Singhania, Vice Chairman and Managing Director, JK Tyre & Industries Ltd. said, “The ICOTY and IMOTY awards represent India’s best on wheels; the nominated cars and motorcycles compete under strict and rigorous guidelines which are a hallmark in the making of the most coveted awards in the auto industry. I congratulate the winners and nominees who are trailblazers for the industry and ever since 2006 the awards continue to reflect the commitment, zeal, enthusiasm and stand as a benchmark of excellence which every auto manufacturer aims to earn.”

The jury for ICOTY and IMOTY constituted of Bob Rupani and Gautam Sen of Auto India; Vikrant Singh and Rahul Ghosh of Auto Bild; Aspi Bhathena of Car India & Bike India; Bertrand D’souza and Shubhabrata Marmar of Overdrive; Srinivas Krishnan, Pablo Chaterji and Rohin Nagrani of Business Standard Motoring and Girish Karkera and Sriram Narayanan of Top Gear. Two new jury members were added to the jury list this year- Dhruv Behl of Auto X and Muralidhar Swaminathan of The Hindu Business Line. This specialist jury consisting of senior Indian automotive journalists is the best from the industry and together they have over 300 years of experience. The jury is known for their analytical skills and competence in evaluating and testing cars, as a part of their profession. The highly experienced jury members are responsible for selecting a single decisive winner and the voting process has been designed to be very fair and unbiased.

Congratulating the winner, Mr. Bob Rupani, Executive Editor, Auto India & Chairperson, Indian Car of the Year 2013 said, “As a founder Jury Member I am very proud to see the amazing growth and popularity of this award. It is by far the most credible award with a completely transparent voting procedure. This year the competition was particularly tough as we saw the launch of some very fine machines. In fact we had as many as three contenders from just one manufacturer Maruti-Suzuki. In the end it was the Renault Duster that took the crown and I feel it is a very deserving winner.

It has set several new benchmarks and like all past ICOTY award winners it is sure to become popular with Indian consumers.”
Mr. Pablo Chaterji, Senior Editor, Business Standard Motoring & Chairperson Indian Motorcycle of the Year 2013 said, “This year, we saw a variety of motorcycles from across categories in contention for the IMOTY 2013 award. We had affordable performance bikes like the Pulsar 200NS, commuters like the Honda Dream Yuga and Suzuki Hayate and even a cruiser in the form of the Royal Enfield Thunderbird. In the end, however, the KTM Duke 200 was the clear winner – it’s an exciting and affordable combination of great design, thrilling performance and outstanding agility, all in one package.”

The expert jury ensured that the voting system is fair and transparent, to make ICOTY and IMOTY the most coveted awards in the industry.
The glittering ceremony was made even merrier by a scintillating musical extravaganza presented by the Silver Strings.