One of India’s most iconic structures was the majestic backdrop to some high octane action, as the Red Bull X-Fighters Jams finally arrived in India and put a display that the Capital will remember for a long time to come. The wheels smoked, the brakes screeched, the engines revved and the crowd roared as some of the world’s best FMX riders literally jumped across Rajpath. The event was also a tribute to Haryana Olympic Association and its athletes who are preparing for the Summer Olympics in London.

Enthralled by the response of the crowd, Nick de Wit who has fought with the some of the world’s best FMX riders at the Red Bull X-Fighter World Series said, “We are really overwhelmed by the spectacular crowd turn out and appreciate their love for the thrilling sport. We want to come back and put up an even bigger show on Indian soil again, to create more awareness about Red Bull X-Fighters.”

Spectators were also treated to performances by Punjabi rapper Yo Yo Honey Singh and other song and dance groups. The event was partnered by BMW who continue to support the sport of Freestyle Motocross in India as they do across the world of Red Bull. The Red Bull X-Fighters Jams travels across the world to almost every continent every year to further expand the fan base and understanding of the world’s most challenging FMX competition.

You can follow Red Bull X Fightersus for updates at- 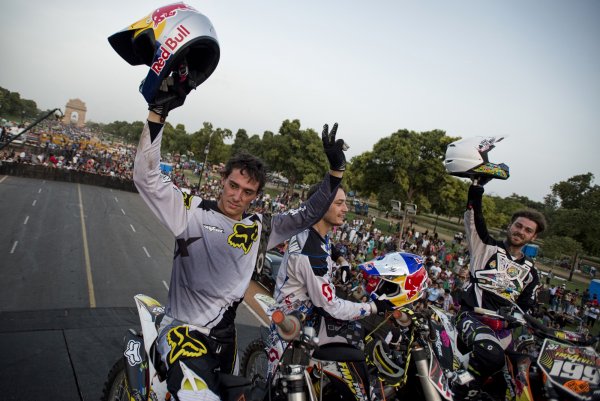