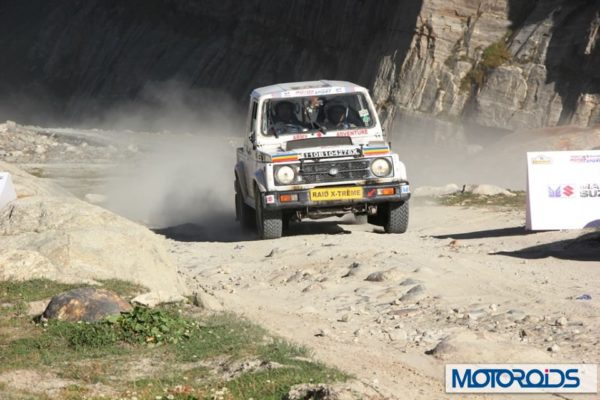 After the most rugged and tough day yesterday, the 15th edition of Maruti Suzuki Raid-De-Himalaya went through a high speed motoring today. In tracks that were mix of dirt-gravel and stretches of tarmac thrown in, the drivers had to resist negotiating the route without looking out of the window on some of most magnificent yet peaceful countryside.

Overnight leader Suresh Rana/Ashwin held on to their nerves to extend their lead today. He now has a cumulative timing of 5.14.16 Hrs over three days. The other two positions remain the same as well. With Amanpreet/Venu Ramesh clocking 5.23.14 retains second spot, Harpreet Bawa/Kashyap have timed 5.32.10 Hrs for the third. 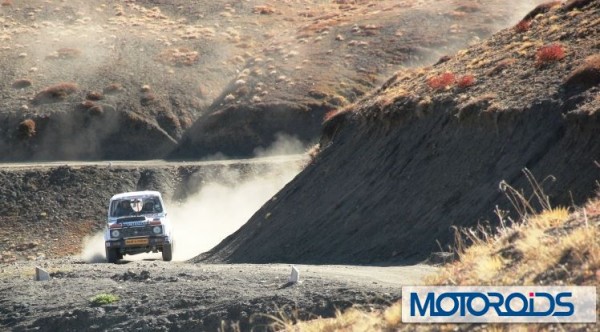 In the bikes segment defending champion C S Santosh has bowed out of contention in this edition due to mechanical failure of his vehicle.

While Helmut Frauwallner has now an invincible lead with a cumulative timing of 5.05.07 Hrs, Stephan Rausch now moves to second position with a timing of 5.33.58 Hrs. R Nataraj, the winner of Maruti Suzuki Dakshin Dare this August is on third spot at 6.01.52 Hrs. The Adventure Trial category will be finishing later in the night.
However, the husband wife couple Satish Gopalkrishnan and Savera D’zousa and the favourite this edition have bowed out of contest.

On an early bright and sunny morning today, both X-Treme and Adventure Trial competitors took different routes around the famous Buddhist Monastery Necklace from Kaza and return. Tomorrow the caravan is set to embark on a long journey back through Gramphoo to Keylong and Pang.

Here are the highlights of Day 3

(Alpine): This is a high-speed category for bikers competing for the first time in the Raid, Raid Adventure Trial follows the Time-Speed-Distance format and for the first time, Raid X-Treme (Scooters has been introduced to enable scooters to take on the rough mountain terrain.

Maruti Suzuki Raid-de-Himalaya is one of the two Indian motorsport events listed amongst the 12 off-road rallies calendar of FIA (Federation Internationale Automobile and FIM (Federation Internationale Motorcyclisme) Geneva, Switzerland. The six day mountain adventure began from Shimla and will traverse the difficult stretches of Kaza and the Monastery Necklace, Khardung La and Wari La, and the temperamental Nubra Valley. Enroute, the Raid will go through some of the highest motorable passes and human settlements in the world. These include Darcha (3360 m), Keylong (3440 m), Leh (3524 m),Kaza (3650 m), Dhankar (3894 m), Losar (4079 m), Rumtse (4300 m), Kunzum La (4551 m), Komik (4587 m) and Pang (4600 m). It will draw to a close at Leh on Oct 12.