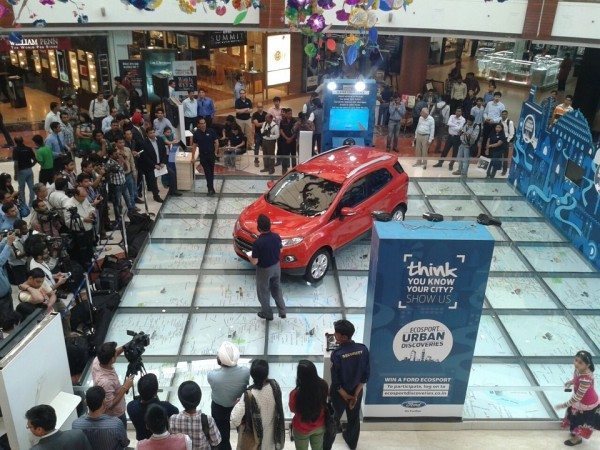 The upcoming Ford EcoSport Compact SUV has to be among the most awaited car launches of recent times. The Ford EcoSport concept was previewed at New Delhi prior to Auto Expo last year and the Compact SUV from Ford is taking its own sweet time coming to us. However, it is now pretty much for sure that the much awaited car is close to being launched in the fast growing Indian car market.

We reported in detail when Ford India launched the marketing campaign for the upcoming small SUV. Christened as the EcosportDiscoveries, the new marketing campaign will see a lucky few getting to spend quality time with EcoSport in various Indian cities.

The production spec Ford EcoSport has now made its public debut in India at the Select City Walk Atrium, Saket in New Delhi. Seen here is an image from the location.

Indian car market will get three engine options to choose from. These include- 1.0 litre turbocharged EcoBoost petrol engine, 1.5 litre Turbocharged diesel engine and 1.5 litre Normally Aspirated petrol engine. All the three motors will be mated to a five speed manual gearbox, with the petrol engines getting an optional automatic transmission.