Its no secret that after adding a GTS moniker to the Cayman and Boxster, Porsche is busy prepping a GTS model of the newly launched Macan crossover. Now, here on this page we have a spy video of the GTS model being spiritedly driven on the Nurburgring. In the video, you can see the Macan GTS going airborne. The Macan GTS will be slotted between the S and Turbo. 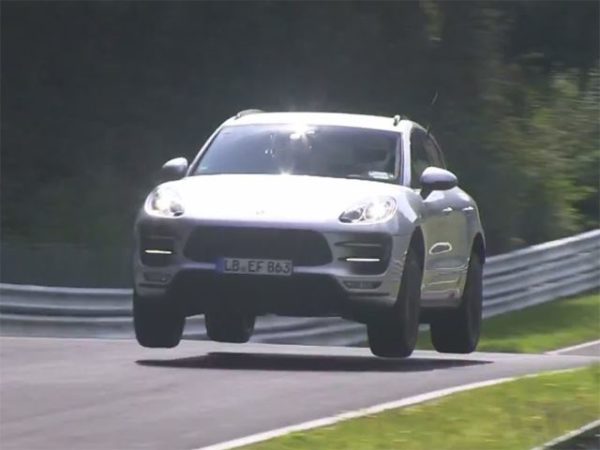 There are no details on what engine will be powering the Macan GTS. The Macan S gets a twin-turbo 3.0-liter V6 with 340 HP under its hood, while the Macan Turbo features a twin-turbo 3.6-liter V6 with 400 HP. This likely means the GTS will have an output of approximately 360-370 HP. If the numbers mentioned are indeed true for the model, the Macan GTS will complete the 0-100 kmph sprint in a mere 5 seconds.

The Macan GTS will also come with a firmer suspension and upgraded brakes housed in bigger alloys. The GTS will share the front bumper with the Turbo and the rear end with the Macan S. The Macan GTS features LED daytime running lights, high-performance brakes and a four tailpipe exhaust system.The roll cage seen in this prototype won’t be carried over to the production model. Don’t bat an eyelid if Porsche unveils the Macan GTS at the Paris Motor Show in October.