Enough had been speculated followed by spy shots to official image and specification release of the the new RC series by KTM. So we aren’t going into rewind mode on the news, figures and specifications. What we have here is a set of sumptuous clicks of the KTM RC series (in stock and powerparts laden avatars) by motorcycle blog DeRestricted.com to go along with a brief descriptive text from KTM’s website.

In fact these bikes were the one that were readied for their EICMA 2013 debut- but we feel it still holds tremendous “eye candy” value to the thousands of bikers out there who have been dreaming to own one since the scoop broke out.

So sit back and enjoy the images!

Starting with the KTM RC125.(Unfortunately not for India)

Easily the best chassis in the segment, the foundation of limitless cornering fun on back roads and race tracks comes in the shape of a featherweight trellis frame, top quality WP Suspension components and an ABS braking system developed in co-operation with Bosch. The economic engine of the 125 Duke with its DOHC fourvalve cylinder head and liquid cooling is not only distinguished by a strong and well-balanced power delivery but also by the highest refinement thanks to its balancer shaft. Cutting-edge injection electronics and a 3-way catalytic converter ensure clean emissions. The RC 125 is a genuine sport bike, not only looking at its engine and equipment, but also in terms of its dimensions and design. After all, a race replica not just needs to be fast – it also needs to look cool. The RC 125 is the long-anticipated alternative to tricked-out mopeds, boring commuters and soft scooters. 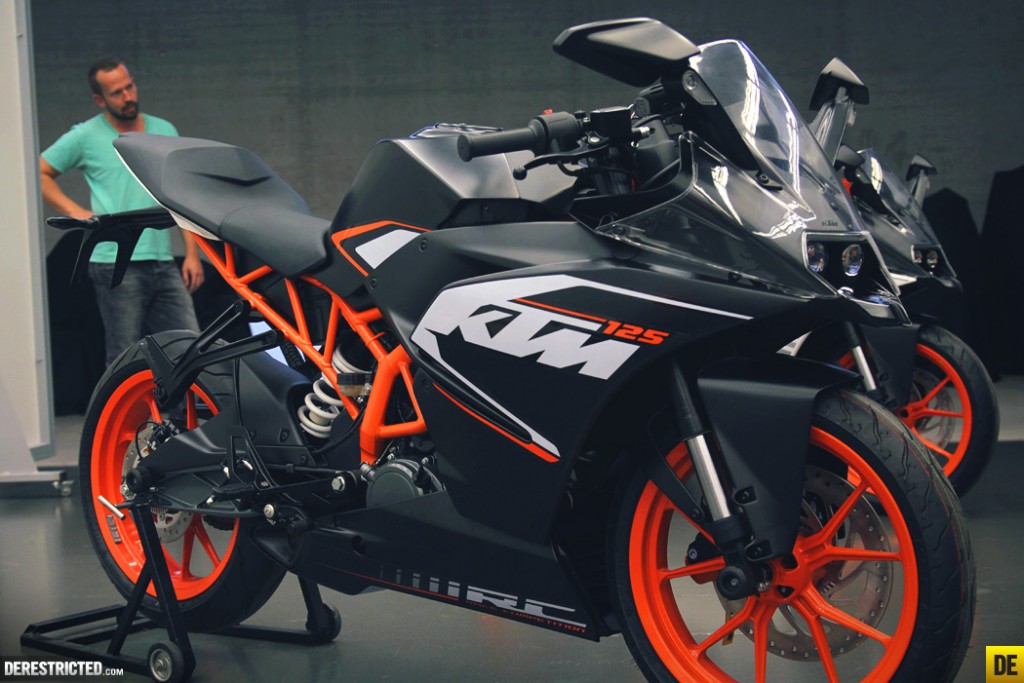 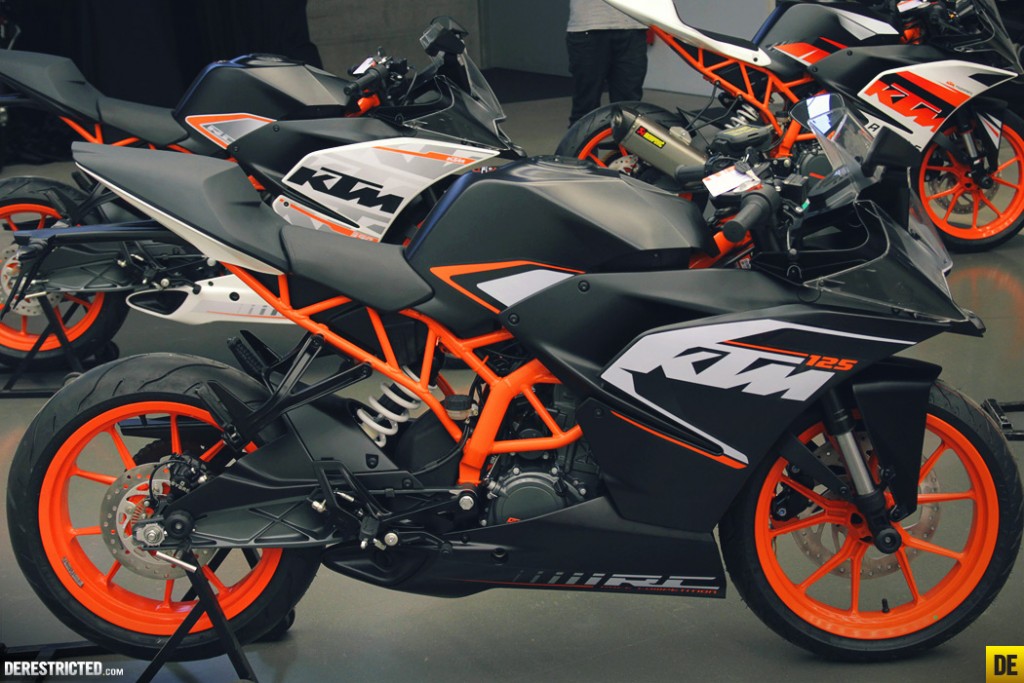 The RC 200 is the ideal sport equipment for all who are ready to compromise on comfort and range if in return they get the looks and character of a Moto3 racer. The cutting-edge DOHC single of the 200 Duke keeps bashing out a whopping 26 hp in the RC 200, developing a surprising amount of torque even at the lowest engine speeds. The sophisticated engine design, the state-of-the-art injection electronics and the closely spaced six-speed gearbox not only supply the RC 200 with impressive performance but also with an impressive fuel mileage. In addition, thanks to its three-way catalytic converter, it is distinguished by minimal emissions. The rigid trellis frame and high quality WP suspension components, adapted to sport use with shortened spring travel and the corresponding set-up, guarantee the highest precision. Masses grouped tightly around the centre of gravity optimise agility. The RC 200 has all the makings of a genuine super sport bike. It is clearly the sportiest bike of its segment, with cool looks and true high tech components – contemporary, safe and fast. 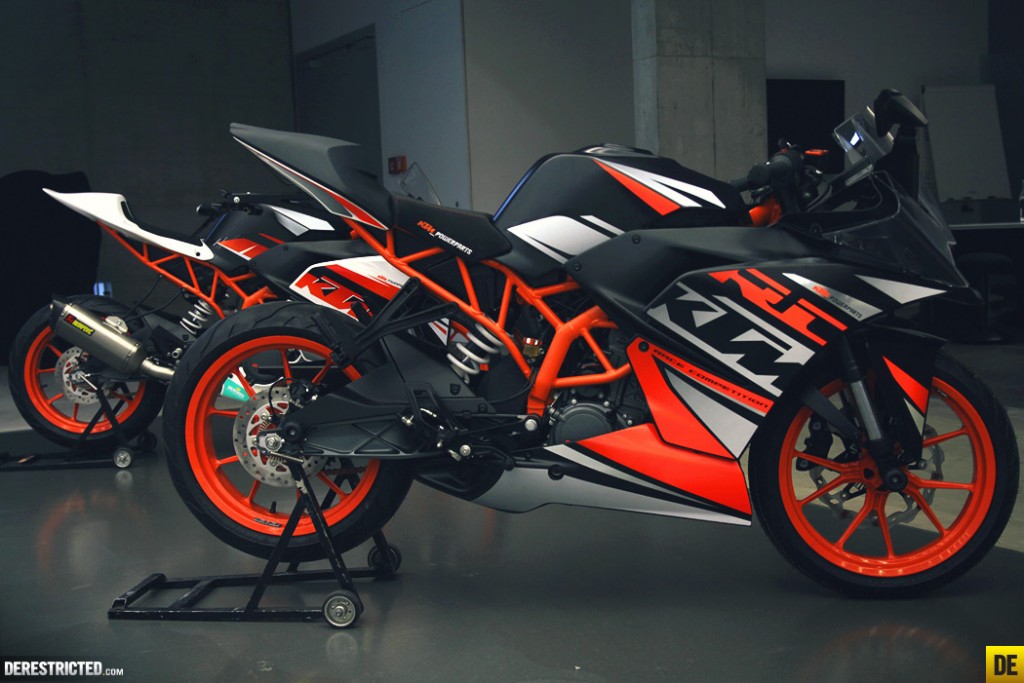 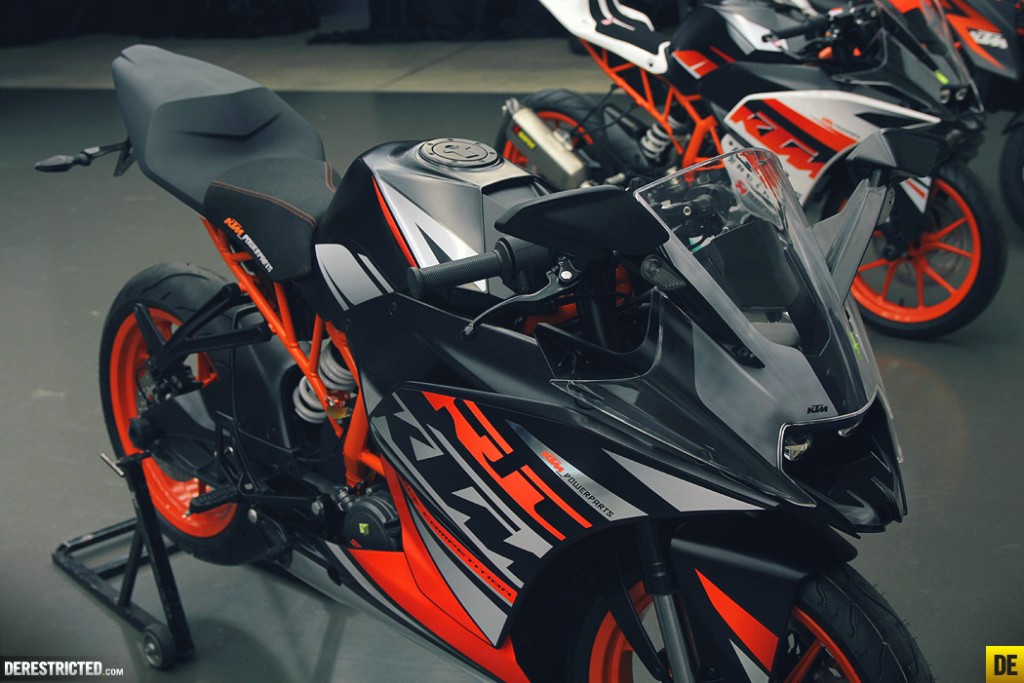 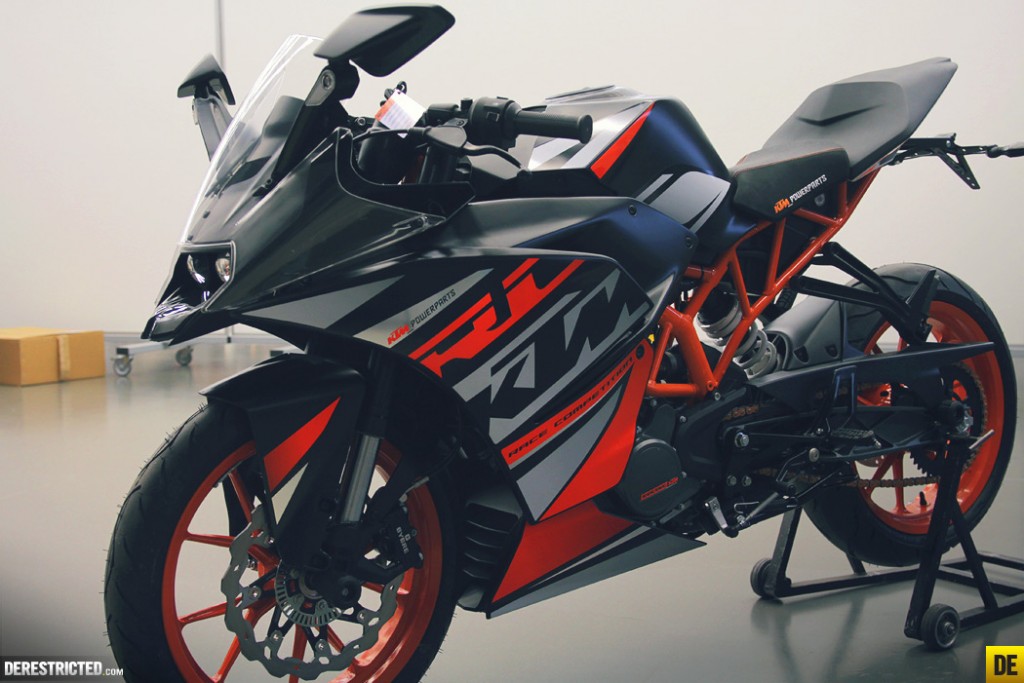 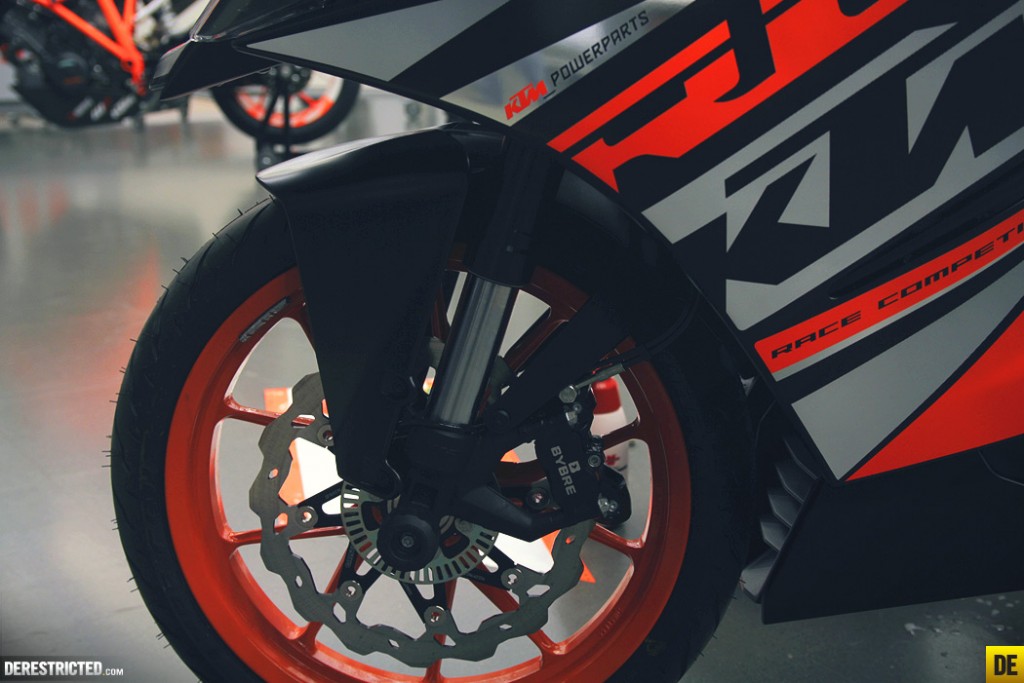 And finally the KTM RC390

The RC 390 is a racing machine in the most literal sense because it is the street-legal version of the very machine on which tomorrow’s GP pilots will join the fight for honour and points in the “ADAC Junior Cup powered by KTM” 2014. The concept speaks for itself: a bike with the weight of a 125 but the power and performance of a veritable sport bike. Thanks to design refinements like vertically stacked gearbox shafts, the sophisticated DOHC single of the RC 390 is extremely compact and weighs in at a mere 36 kilos. Thanks to its four-valve cylinder head with DLC-coated finger followers, dry-sump lubrication with crankcase evacuation, and three-way catalytic converter, it has everything to combine 32 kW (44 hp) of maximum power with impressive refinement, extreme reliability and great ecological credentials. WP suspension components matched to the dynamic performance, as well as a top quality braking system with disengageable ABS ensure top precision, full control and maximum safety – perfect conditions to vanquish riders of much bigger super sport bikes on the race track. This is the ideal tool for racing rookies, but also for returning riders with high octane fuel in their veins and well versed sport riders with a penchant for understatement. 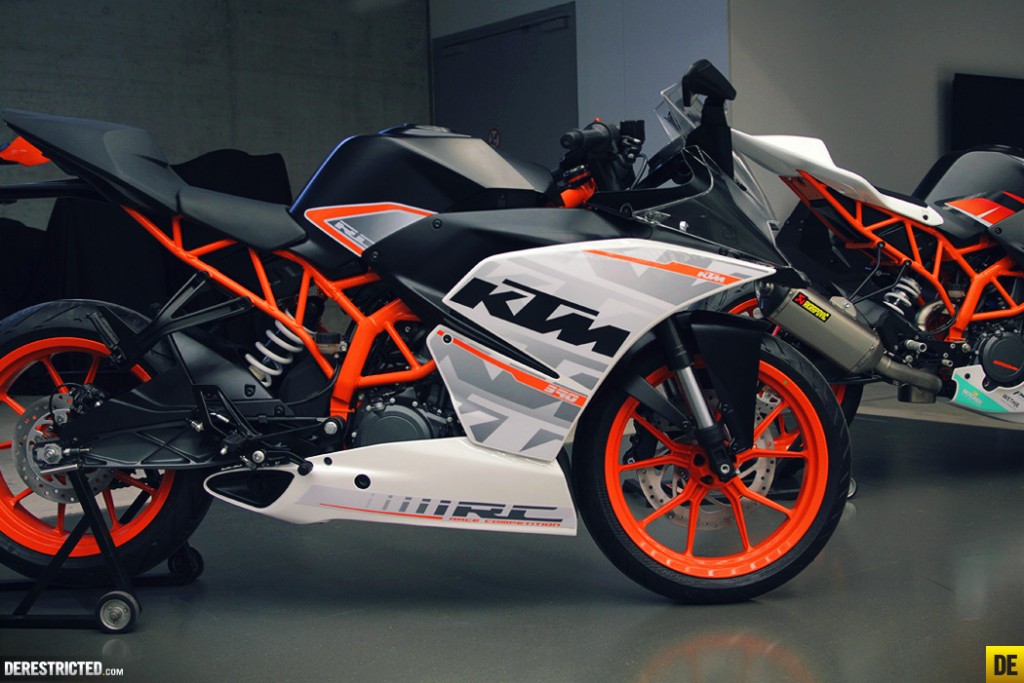 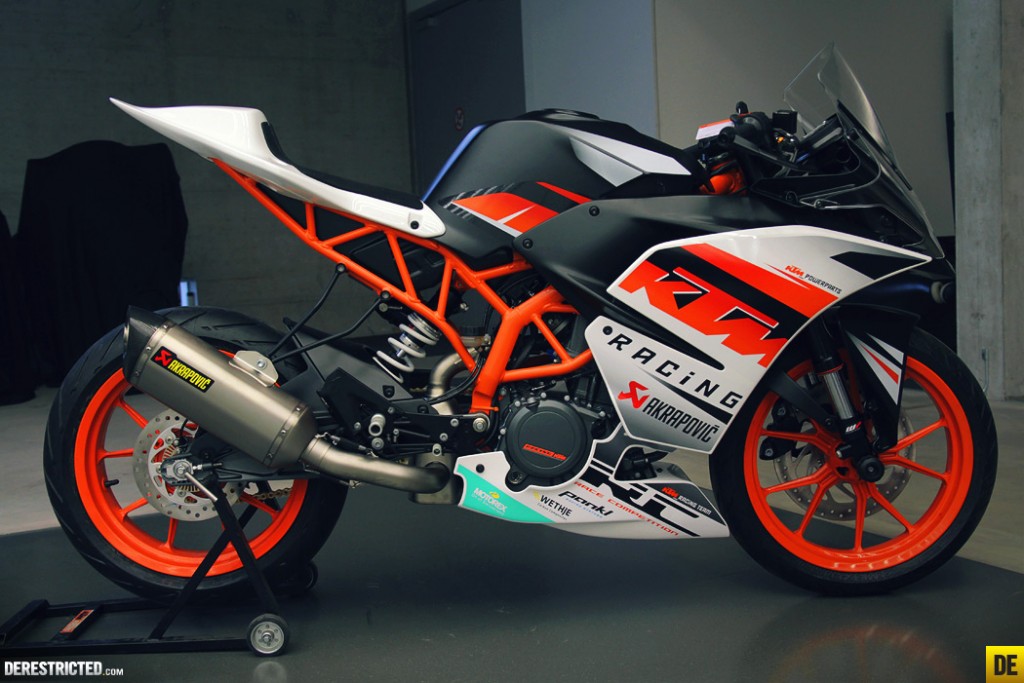 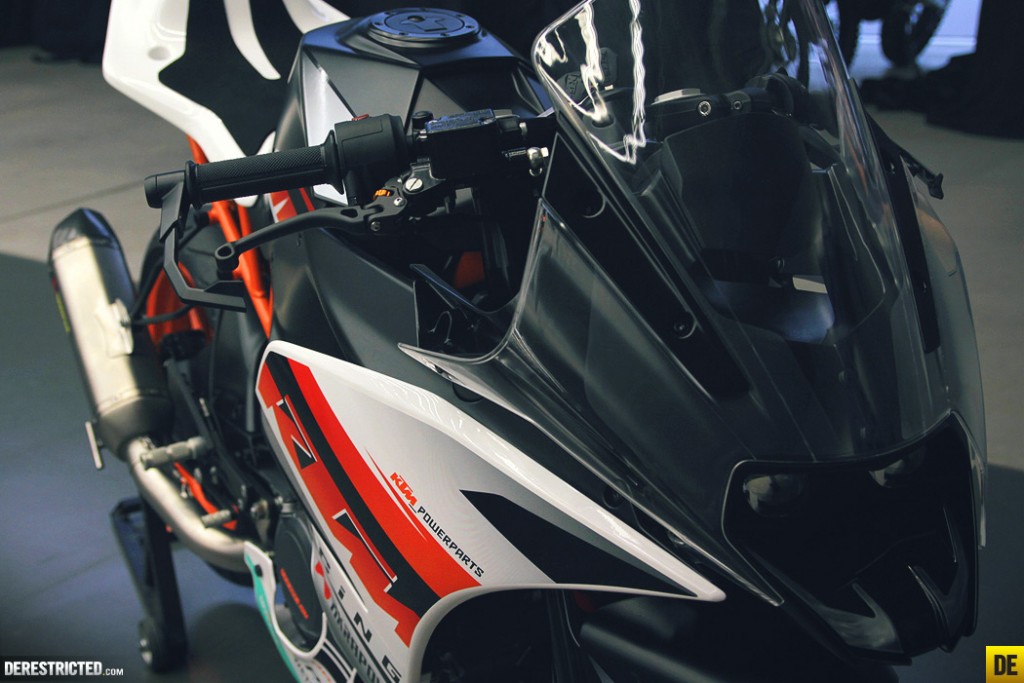 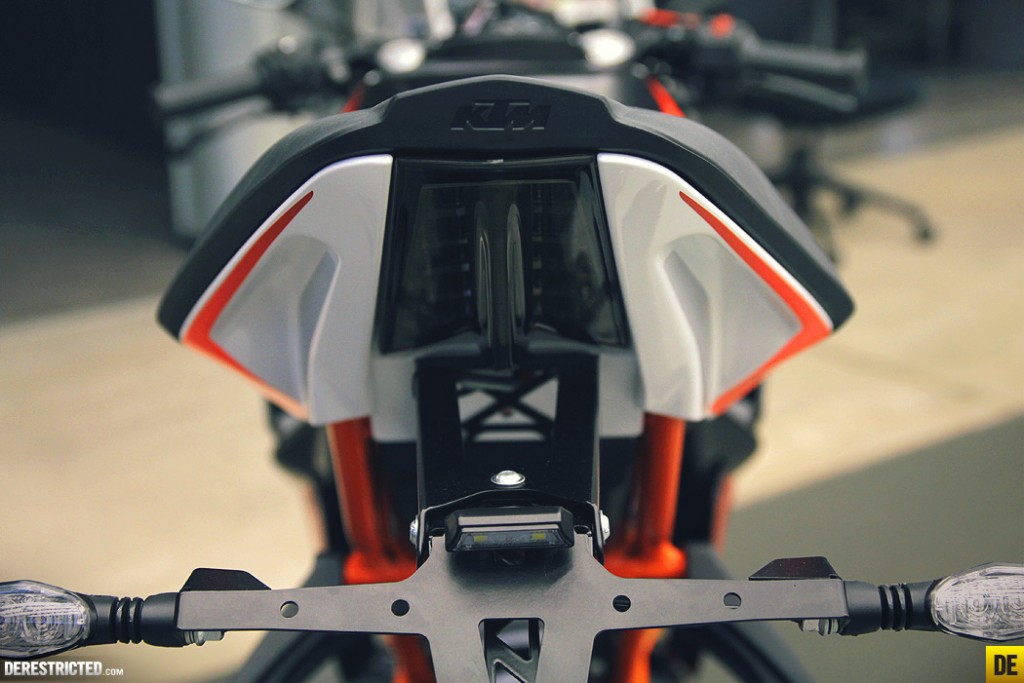 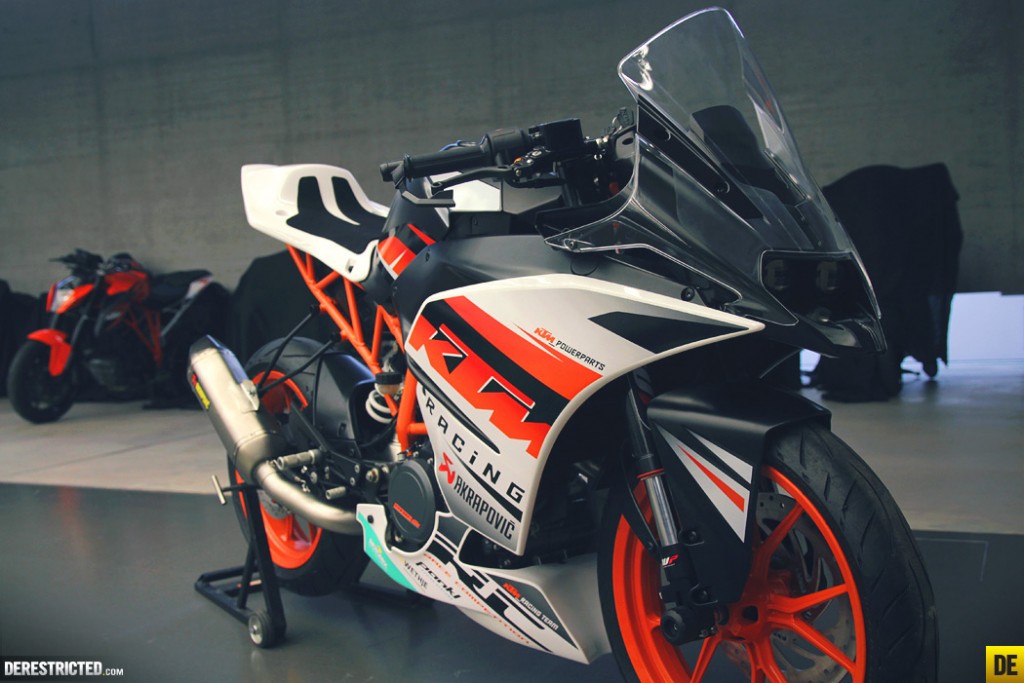 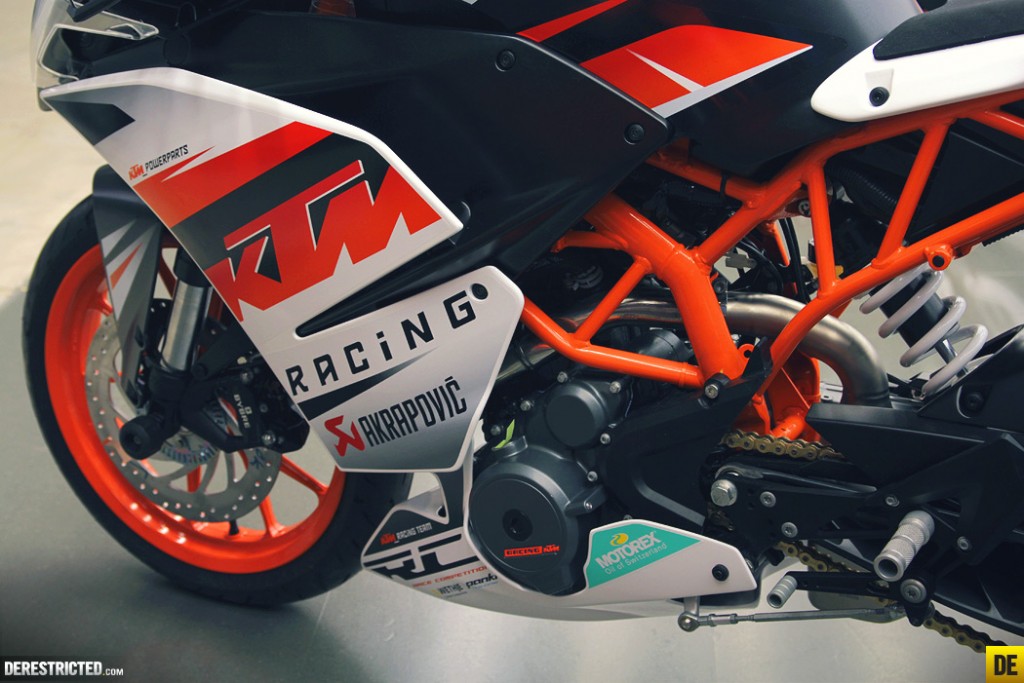