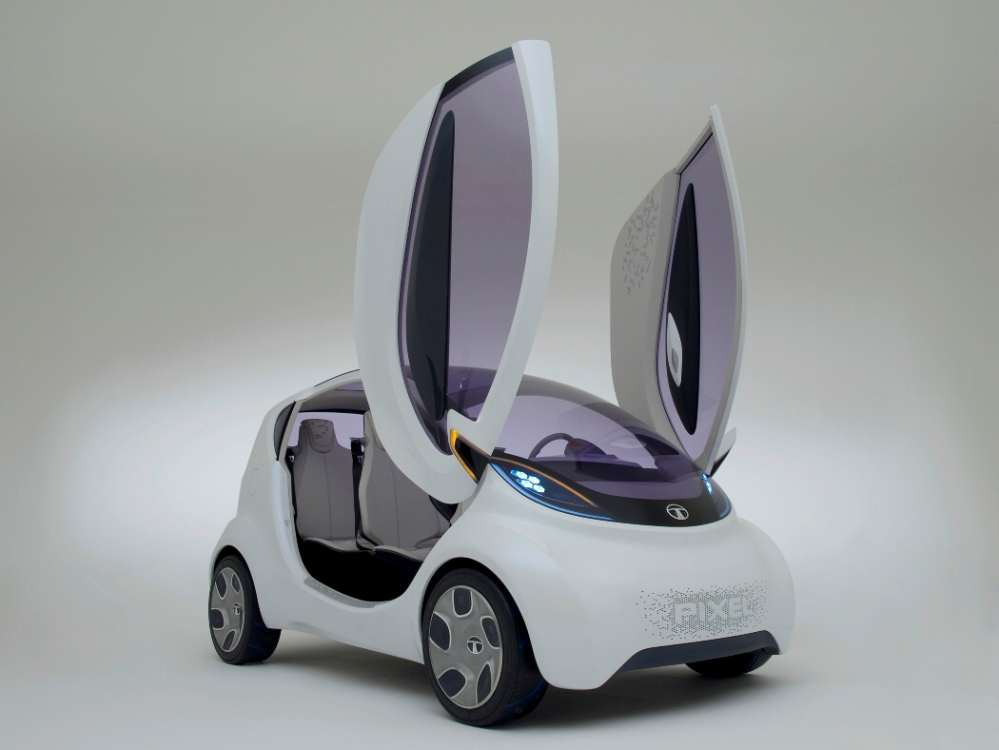 Tata Motors have unveiled the Tata Pixel, a new city car concept for Europe. Based on the Tata Nano, the Tata Pixel – at just over three metres in length – is claimed to be the most efficient four-seater in the world. Made to seat four in comfort, the Pixel is custom designed for the European car market.

The Tata Pixel’s ability to manoeuvre and park in the tightest of spaces is made possible by its Zero Turn toroidal traction-drive Infinitely Variable Transmission (IVT), which assists rotation of the outer rear wheel forwards and the inner rear wheel backwards, while the front wheels turn at acute angles. The result is a turning circle radius of just 2.6 metres. The ‘scissor’ doors rotate upwards from the front to allow passengers to effortlessly enter or exit the Tata Pixel, even in the tightest of spaces.

A forward sweeping roofline, with minimal front and rear overhangs, accentuates the youthful styling. The Tata Pixel is also designed to provide a high level of connectivity. Key functions are controlled by the driver’s smart phone, running ‘My Tata Connect’ — the first integrated human-machine interface (HMI) concept from Tata Motors.

The Pixel is powered by a 1.2 litre three-cylinder turbocharged diesel engine positioned at the rear of the Tata Pixel. Expect the same engine to Power the Tata Nano as well in the future. The engine is a low-friction design, featuring variable coolant and oil pump and rapid warm-up technologies. With optimised aerodynamic drag, low rolling-resistance tyres, stop-start technology, and intelligent battery charging, the Tata Pixel returns European combined cycle (NEDC) fuel economy of close to 30kmpl and CO2 emissions of just 89g/km.

Speaking on the occasion, Mr. Carl-Peter Forster, Managing Director and Group CEO of Tata Motors, said, “Tata Motors holds true to its belief that there is an opportunity in Europe for a city car, which is optimal in space, manoeuvrability and environment-friendliness. The Tata Pixel is a reflection of Tata Motors’ idea of what such a car should be.”