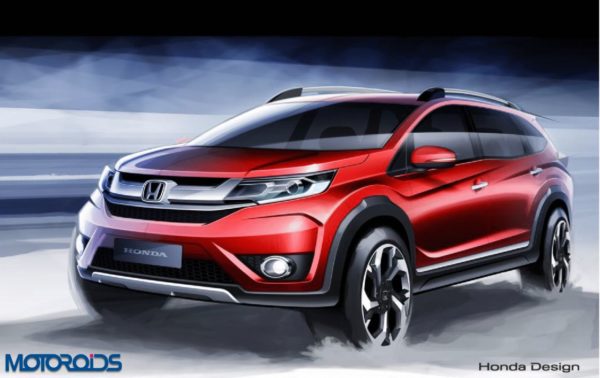 Compact crossovers are the hottest commodity in the Indian car market at this point in time. The yet to be launched Hyundai Creta is already making people make a beeline to the Hyundai showrooms without even knowing the price. Japanese carmaker Honda also wants its own share of the pie, and has released the first official sketches of the Honda BR-V Prototype – a new generation crossover utility vehicle that will make its world premiere at the upcoming Gaikindo Indonesian International Auto Show 2015. The Gaikindo Indonesian International Auto Show 2015 is scheduled for 20 – 30 August, in Tangerang, Indonesia.

BR-V stands for Bold Runabout Vehicle, and has been developed by Honda R&D Asia Pacific Co., Ltd. (HRAP) in Thailand specifically for Asian market. So expect to see this crossover on Indian shores sometime next year. The BR-V is based on the Brio, Amaze and the Mobilio platform.

This Ford Ecosport and Renault Duster rival will feature a rugged looking exterior design with high ground clearance, big and stylish alloy wheels and sleek roof rails. The front fascia, like most Honda cars introduced lately features bold grille and has a strong family resemblance. Sketches indicate that the centre part of the chrome equipped grille holds Honda logo with projector headlight on either side. The five spoke diamond cut alloy wheels look appealing and we hope to see a similar design on the final product. The character lines add to the muscular and rigid look of the Honda BR-V. 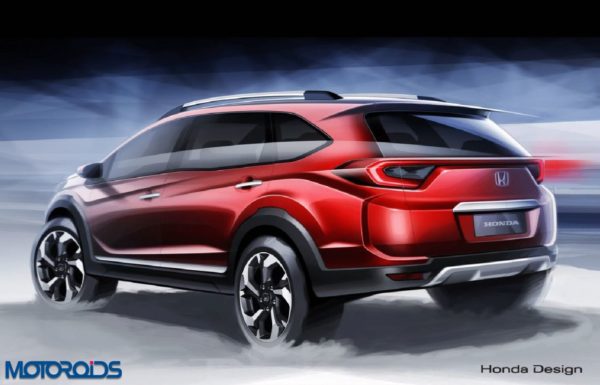 Honda claims that the BR-V will also offer a comfortable and spacious cabin with seven seats in a three-row configuration. We are not sure about the third row comfort as it would be a lofty feat for a compact crossover to achieve. We would, however, hold our thoughts till we see the actual concept at the Gaikindo Indonesian International Auto Show 2015.

While Honda has remained tight-lipped about the power output numbers, the car maker confirmed that the new BR-V will be powered by a 1.5-litre i-VTEC petrol engine which is claimed to provide sporty performance and great fuel efficiency with two advanced transmissions available. The 1.5-litre i-VTEC, that is seen on the Honda City, delivers 119 PS of power and 145Nm of torque and we expect to see similar figures on the BR-V crossover. We also expect to see a diesel variant drawing power from the 1.5-litre i-DTEC motor that performs duties on the Honda Amaze/City and is expected to deliver 100PS of power and 200Nm of torque.

Honda also said that high standard safety features will be the base of the model as it has always been for every Honda products. The prime competitors for the Honda BR-V in the Indian market are the award winning Ford EcoSport, the Renault Duster and the upcoming products such as the Hyundai Creta and the Suzuki S-Cross.

Would you like to wait of this new Honda crossover? Let us know your views about the new Honda BR-V through the comments section below.