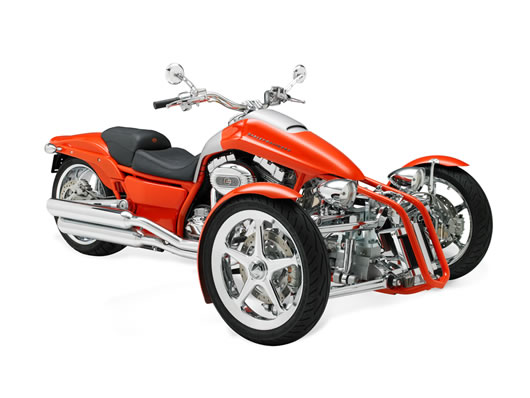 Here’s a Harley Davidson Trike with a twist, or should be say, a flip! First of all, this one isn’t your usual trike, it has two wheels at front and one at the rear, unlike the regulation trikes which are the other way round. Second, this one can lean around corners, just like your regular two-wheel bike, or like the Piaggio MP3, if you have seen the thing in action that is.

Codenamed Penster, the trike has been designed by John Buttera. The man has been designing and bulding customs since god knows when and was taken aboard by Harley honchos to pen some machines for the company. The original version came out as early as 1998, but a series of refinements and alterations to make it ready for production brought 2006.

The vehicle, however, alluring it may appear, will not make it to the showrooms. It’s kept at the Harley museum. It’s a thing of beauty nonetheless, and thus a joy too. Feast your eyes!