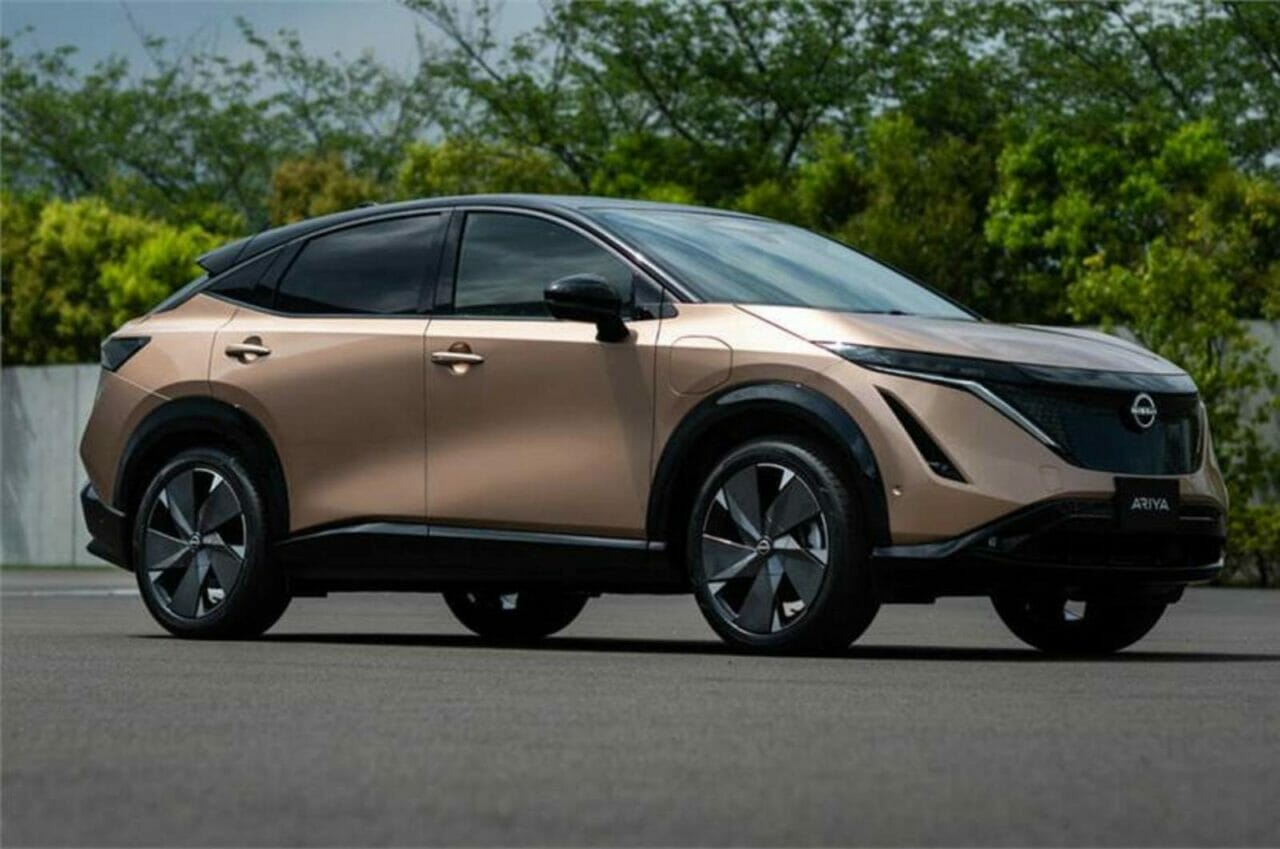 Nissan Motor has revealed its highly ambitious electric SUV – Ariya on Wednesday, its first all-new global model in five years. The all-new Ariya has been revealed via a digital event at Nissan headquarters in Yokohama, Japan.

The images reveal a lot of details about the upcoming SUV, besides the information shared by the Japanese automaker at the event. The leaked images confirm that the Nissan Ariya electric SUV will be almost identical to the prototype version that was showcased at the CES 2020 in Las Vegas last year. 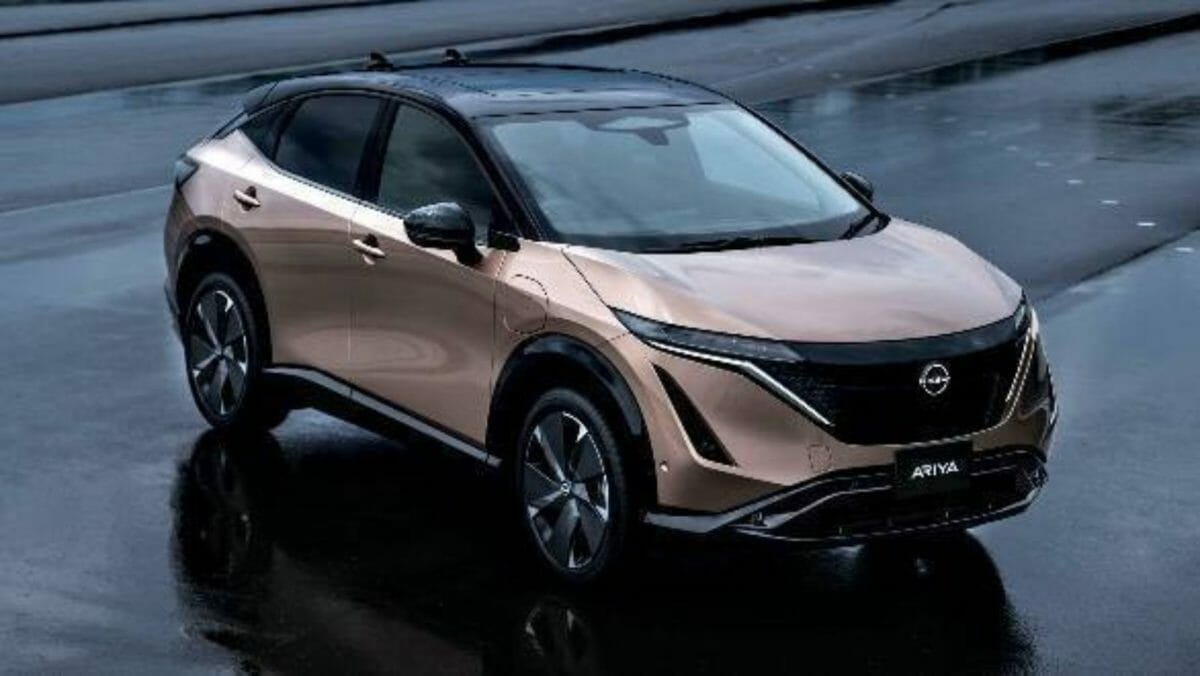 As per Nissan, the “Ariya is an all-electric crossover. It has been designed for completely autonomous driving with seamless connectivity, lounge-like interiors and offering the latest in technology to both drivers and passengers. This future-ready electric car is ideally suited both for daily commute and weekend getaways.”

The Ariya retains the bold styling of the concept unveiled at last year’s Tokyo motor show and showcases Nissan’s new brand identity with “seamless, elegant and fresh” styling. It’s the first model built on the Renault-Nissan-Mitsubishi Alliance’s new CMF-EV electric architecture. At the front, the SUV sports an aerodynamic look with an enclosed grille, slim headlights with LED strips with DRLs, vertical air intakes and a black lower frame to give this SUV a robust appearance.

The Ariya seems like it hasn’t forgotten its concept car roots, with a high-set waistline, tapering roofline and futuristic LED lighting at either end. It’s a look that’s likely to influence future Nissan SUV models as well. Nissan has reinvented its V-Motion grille, into what it calls a ‘shield’ with a traditional Japanese Kumiko pattern underneath, while the new Nissan logo is backlit by LEDs.

Other features include a steep sloping windshield, streamlined sides and large ‘shoulders’, as well as an aluminium roof frame. At the rear of the SUV is a large spoiler, a lower diffuser and LED taillights that run across the width of the SUV. The Ariya gets black treatment in the bumper, wheel arch edges, inserts at the sills, mirror caps and the roof. 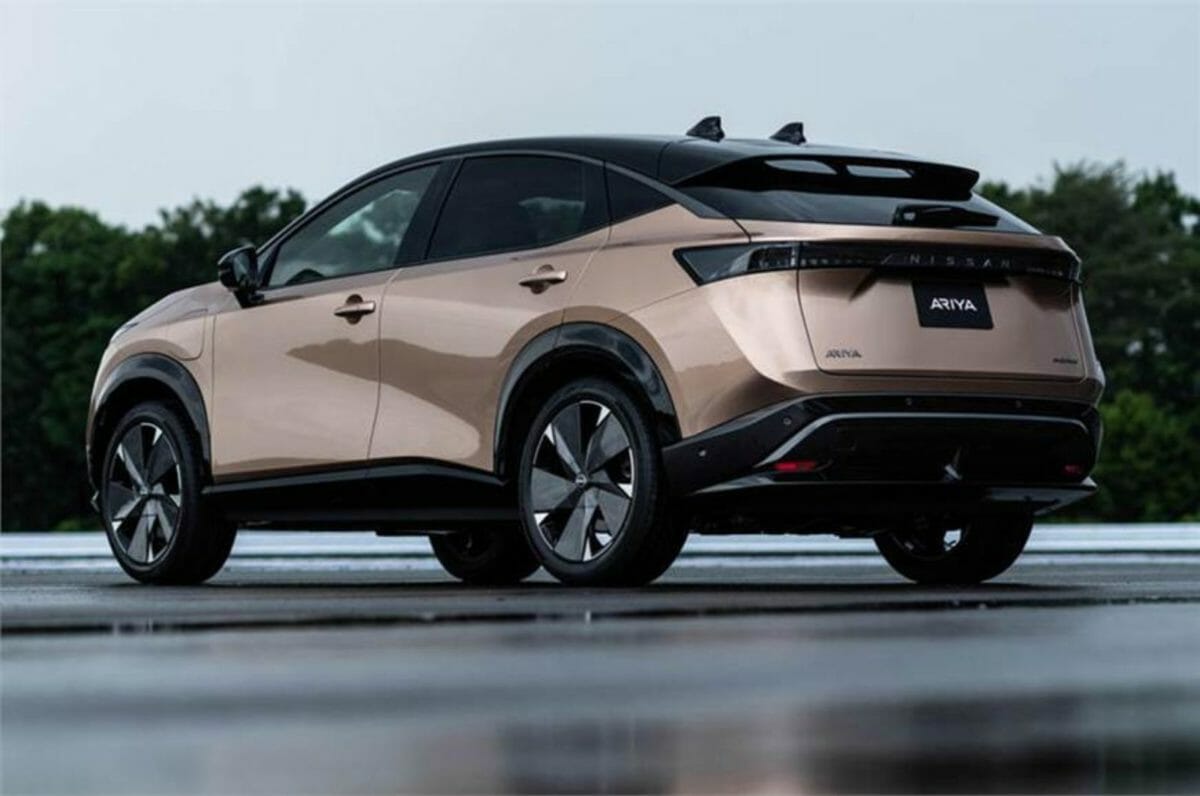 The back end has a distinctive C-pillar design, a high-mounted rear wing and a one-piece light bar. The 19-inch wheels help keep the concept-look alive, and ride on 235/55 section tyres, with 20-inch wheels available as an option and  has multi-link rear suspension. Dimension wise, the Aria measures 4,595mm in length, 1,850mm in width and 1,655mm in height with a wheelbase of 2,775mm. That makes it virtually the same size as VW’s upcoming ID 4 electric SUV. The Ariya’s weight ranges from 1.8 to 2.3 tonnes, depending on spec.

At the inside, the vehicle gets minimalist treatment with a two-spoke steering wheel and a small gear lever, as well as a wireless smartphone charger and two large 12-inch touchscreens and controls integrated into the console, quite like a Mercedes setup. Thanks to that clever engineering, components such as the AC condenser and the like have been positioned under the hood, freeing up space for a wrap-around dashboard. 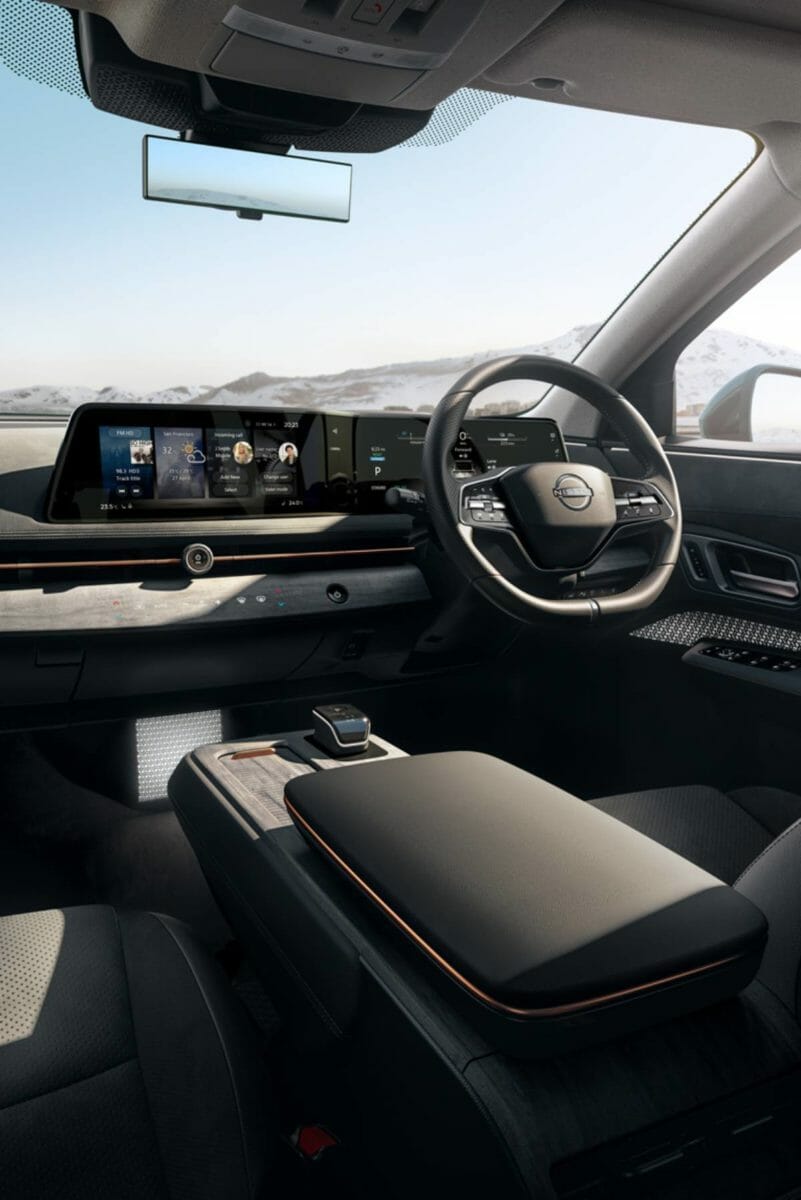 The Ariya will also be offered with a high level of driver assistance systems, including an enhanced version of the Leaf’s ProPilot system, with lane-keeping assistance and adaptive cruise control. Nissan’s Safety Shield active safety systems are standard. This consists of an intelligent around-view monitor, intelligent forward collision warning, intelligent emergency braking along with Rear Automatic Emergency Braking technology. Its onboard equipment also includes Amazon Alexa, over the air firmware updates and a human-machine interface allowing the user to adjust car settings via natural speech. 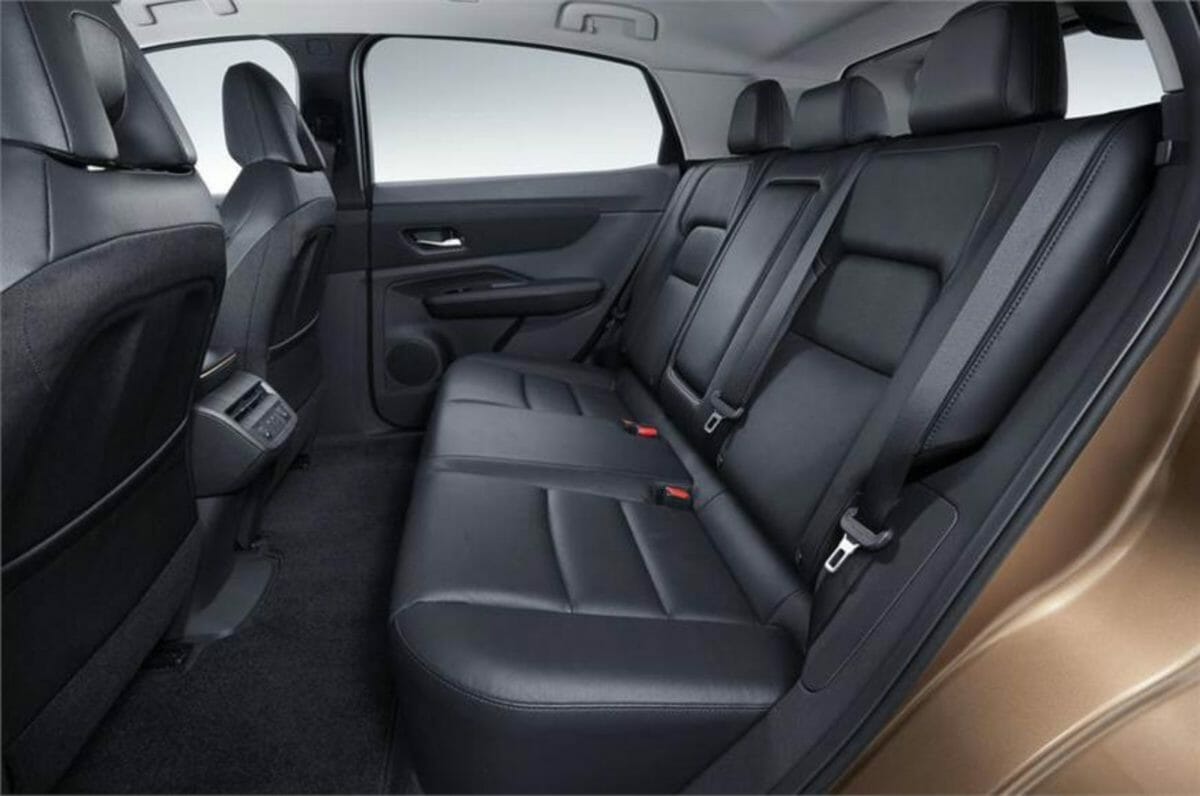 With no transmission tunnel to account for, the centre console can be positioned according to driver preference, with Nissan’s slim profile Zero Gravity seats freeing up more space in the cabin. Nissan promises lounge-like seating, and up to 466-litres of boot space for the 2WD model.

Powered by an all-electric drivetrain, the Ariya promises best in class power delivery, charging capabilities and extended range. It will be seen with two configurations of two-wheel drive and e-FORCE all-wheel drive, perfectly balanced for both delivery and comfort. Nissan will offer the Ariya with both single-motor rear-wheel-drive and twin-motor four-wheel-drive powertrains and a choice of 63kWh and 87kWh batteries. The 63kWh single-motor model will offer 218hp and a range of 360km, while the 87kWh car makes 242hp and has a 500km range according to the WLTC Japan cycle. Both the motors are capable of acceleration from 0 to 100 kmph in 7.5 and 7.6 seconds respectively.

A range-topping e-4orce Performance model will use the 87kWh battery but produce 394hp and 600Nm and have a 400km range. It will cover 0-100kph in a claimed 5.1sec and, like both other e-4orce models, have a top speed of 200kph. The Ariya’s twin electric motor all-wheel-drive system promises fast, usable performance under all conditions. Nissan also claims that up to 375km of range can be recovered with a 30-minute charge from a 130kW source.

Ariya will be Nissan’s first zero-emission SUV, positioning itself as one more alternative to the successful LEAF and positioned at the height of the Qashqai. The design of the headlight cluster matches with the concept version of the Ariya electric SUV.

After a tumultuous past few years with all the controversies and the drastic drop in sales, Nissan would be pinning their hopes heavily on the upcoming electric SUV as it will take on the Tesla Model 3 directly.  Spearheading the Nissan NEXT transformation plan, the all-electric Ariya will go on sale in Japan by mid-2021, priced at 5 million yen (Rs 35 lakh converted). Sales in other global markets are expected by the end of 2021 but the Japanese automaker hasn’t yet disclosed a fixed timeline.