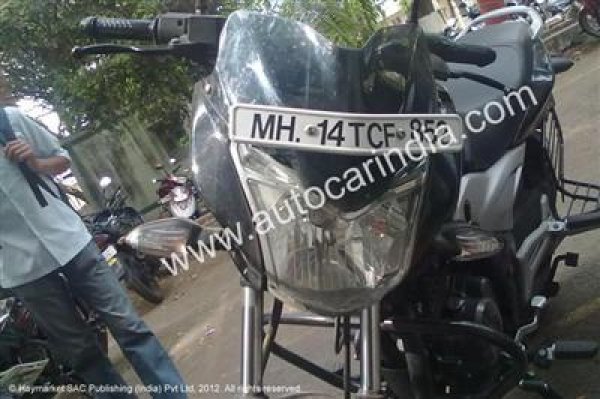 Only yesterday, we reported that there are fair chances of Bajaj launching the all new Pulsar on 14th. It may be noted that Bajaj had sent us an invite for the launch of an “exciting new bike”. The 200 NS should had arrived by April end and it made logical sense for it to be launched on 14th this month. However, catching us by surprise, it seems like Bajaj has decided to further postpone the launch of new Pulsar. This is not all as the manufacturer also wishes to do away with the “unveiling only” event for the gen next Discover and unveil and launch it on 14th itself.

The next gen Discover will be as much modern and feature-rich as the next Pulsar is. The new Discover will come with a gas filled Monoshock (a segment first) and it may be noted that Discover becomes the second Bajaj to sport this type of rear suspension, the first being the Pulsar 200NS. Very much like the 200NS, the new Disco too gets a new chassis and swingarm.

The end can seen on the new Disco is quite similar in position to the one on 200NS. The new Disco also gets aluminium foot pegs and new mudguards.Unlike the trend these days, the next gen Disco will not feature split grabrails but will instead come with a newly designed single unit. The bike is also seen with newly designed set of alloys and did we tell you that we hate that hugger around the rear wheel? Other than this, the bike gets all new panels & tank, a new speedo console with analogue tacho and a digi speed read out, new ORVMSs, trafficators borrowed from Pulsar 135 LS, half chain cover, front registration plate on top of the fairing (a la 200NS) and disc & drum brakes combo.