Volkswagen has revealed the first technical details of the all-new Passat , ahead of the cars’ unveiling in July. The car is set to make its public debut at the Paris Motor Show in October.

The upcoming eight gen of the Passat makes use of advanced materials – including high-strength, hot-formed steel and aluminium in certain areas. Thanks to all these, the new Passat is up to 85 kg lighter than its predecessor, helping it to claim expected fuel-efficiency improvements of up to 20 per cent. Despite exterior dimensions that are actually marginally smaller than those of the previous Passat, interior space is improved, with more leg- and head-room, as well as increased luggage space.

The new gen Passat will be powered by a new 2.0-litre, bi-turbo diesel which will output a healthy 240 PS and an 500 Nm from 1,750 rpm. This engine will be available only with a new seven-speed DSG gearbox and 4MOTION all-wheel drive. A plug-in hybrid model will also be on offer, which have enough juice to do 31 miles on battery power alone, and with a potential maximum range of around 600 miles. 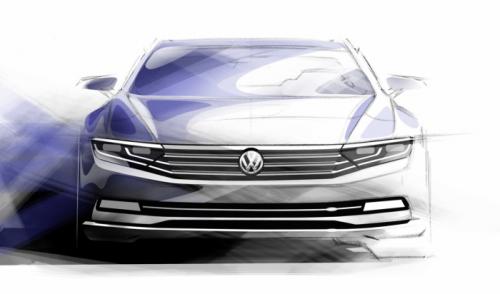 Other new technology which will be seen on the new Passat includes the Active Info Display, which replaces the instrument cluster with a fully configurable interactive 12.3-inch TFT display; a heads-up display; the latest Modular Infotainment System, including the Car-Net remote app; a further-developed 360-degree Area View function; and the latest generation of Park Assist. This newly developed Park Assist includes the option for the car to park itself forwards into perpendicular spaces – useful, for example at supermarket car parks, where access to the boot is important.

Safety equipment on the new gen model includes Side Assist with Rear Traffic Alert; Traffic Jam Assist which makes stop-and-go driving more comfortable; Emergency Assist, which can potentially halt a vehicle when the driver is incapacitated; and the latest Front Assist system with City Emergency Braking, which optionally combines both radar and camera sensors to add pedestrian detection.

More details and first pictures of the Passat will be available in early July. UK sales are scheduled to happen before the end of the year, with first deliveries expected in early 2015.