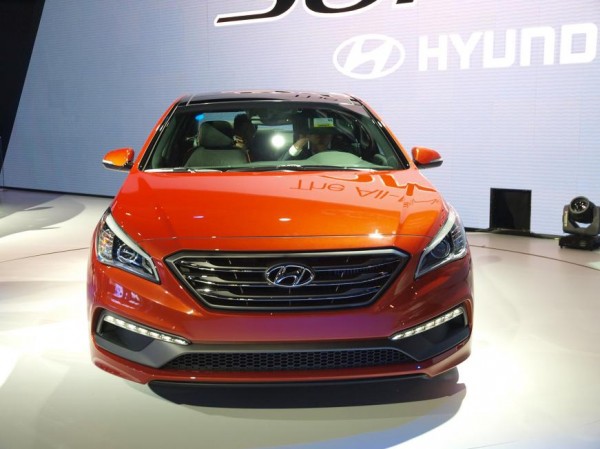 The new 2015 Hyundai Sonata, which debuts the new Fluidic Sculpture 2.0 design language, has been showcased at the 2014 New York International Auto Show.

The current gen Hyundai Sonata (internally codenamed as YF) made its debut way back in 2009 and its swooping roofline and stylish front end reminds many of that of the Mercedes-Benz CLS, along with bringing in a positive response from the car buying lot. Now, Hyundai have come up with the 2015 Sonata, which will pose even bigger threat to the likes of Ford Fusion, Toyota Camry and Nissan Altima.

Hyundai has also said that,”Internal tests suggest that the all-new Sonata will score “Good” at IIHS’s small overlap test“. It may be noted that the 2015 Sonata is considerably safer than the outgoing model, which is due to the increased use of Advanced-High Strength Steel (AHSS) on the platform. The car maker has also increased the use of structure adhesive by more than 10 times. All this has resulted into a 40 percent increase in 2015 Sonata’s torsional and bending stiffness.