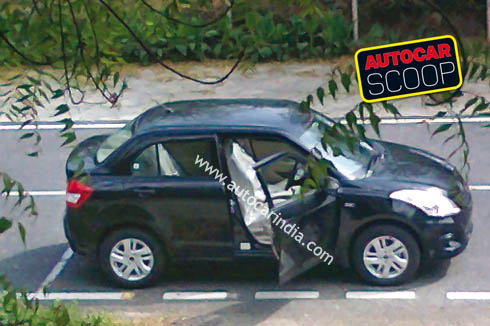 Talking about small sized sedans, if you found the Tata Indigo CS funny (or functional) then the new Swift Dzire will have the same effect on you.  The new Swift Dzire which was recently spied at Gurgaon by ACI has undergone a major operation which will make the car smaller so that the car falls under the category of under 4 meters.We’d like to mention here that we had told you long back in January that the new Dzire will be available in a sub-4 meter guise.

The new Dzire will be supported by the same 1.2 K series Petrol & 1.3 DDiS Diesel engine and looks to be like the new Swift which the buyers are awaiting. The new Dzire may be ready to roll in November itself but it is expected to make a face off against its new under 4 meters rival M&M Verito In the January 2012 Auto Expo held at Delhi.

Tell us does this new compact sedan appeal to you?