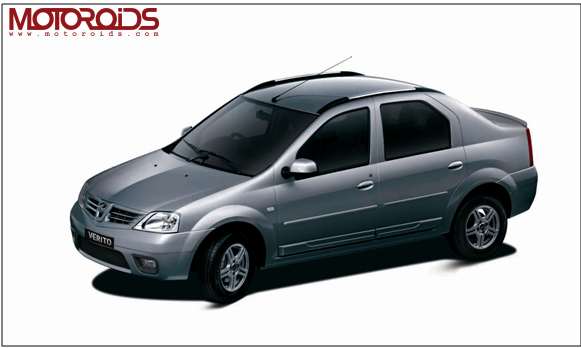 Mahindra & Mahindra Ltd have today officially announced the launch of its rebadged Logan sedan – the Verito. The new Verito is still essentially the Logan, albeit with some very minor changes, including a new Mahindra badge and emblem. The car, in its new avatar has been priced very competitively at Rs. 4.82 lakh (petrol BS3 version) & 5.62 lakh (Diesel BS3 version) pan India. The BS4 compliant version is also available for BS4 markets.

Verito which is derived from the Latin word ‘Veritas’ means truth and goes with the overall image of an honest, sensible and dependable car.

Changes on the new car include a pair of ski racks on the roof. Mahindra is calling the feature a first on any sedan in India. Apart from this, the new car also features side claddings on the door to prevent scratches in tight spaces. Then there is some additional chrome at the rear end, along with a rear spoiler which further adds a bit to the aesthetics of the car. While the lines of the Verito still remain pretty much boxy, the new changes have made the Verito aka old Logan a wee bit more desirable. The company finds the new changes on the exterior ‘aligned with the tough, rugged and sporty DNA of a Mahindra vehicle.’

The new Verito is powered by the same 1.5 DCi CRDi diesel engine or 1.4 MPFI petrol engine that powered the Logan. Strong points such as 21.03 kmpl fuel efficiency for the diesel, the widest backseat in its segment, and a cavernous 510 litre boot remain to be the strong points of the Verito.

Mr. Rajesh Jejurikar, Chief Executive, Automotive Division, Mahindra & Mahindra Ltd. said “The Verito, with its unique value proposition aligns with the Mahindra DNA of offering tough, rugged and sporty vehicles. For the first time, we are using social media platforms to unveil a new product, reflecting alternative thinking. The earlier Logan will continue to get complete service and spares support from us.”

Features of the Verito

The Verito has several new features which include: