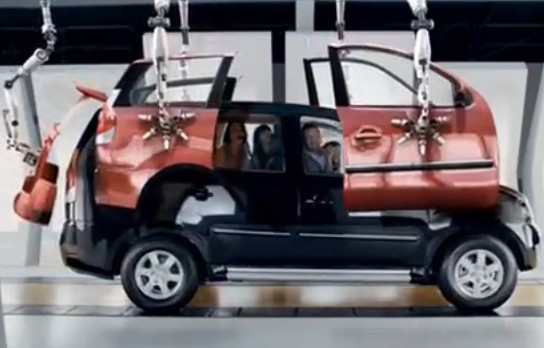 Two Mahindra ad stories in a row. We know it’s a bit of an overdose, but you’ll have to trust us when we say it’s pure coincidence. Just as we stumbled upon the making of the XUV500 ad, we also got a mail from the communications people at Mahindra, with a link to the new Xylo TVC.

M&M have retained Atul Kasbekar and his gang of PYTs to carry forward the ‘Happy Legs’ theme which was the centerpiece of their previous communication. We think it works for the product, especially the Xylo in its new, more stylish guise, where the idea is to elevate its image as a premium, comfortable MUV which is desirable for personal users too, and not just a 7 seater option for taxi operators.

Having attended the launch event of the new Xylo, we know for a fact that this ad is just one part of the entire campaign. In its first installment, the campaign focuses on the exterior enhancements. A celebrity who’s the epitome of cool with his impeccable reputation in the world in fashion, surrounded by an  army of sexy females lends the whole ad a very upmarket feel. The changes incorporated on the exterior have also been depicted very nicely. The ‘makeover’ button brings home the message of a cosmetic surgery in a clear and straight forward way. We quite like it.

In the second instalment you’ll see the campaign highlighting the space inside, the fresh interior and the newly incorporated Voice Command technology. We’re sure the second part should be out soon. Before it does, have a look at this one, and do let us know what you think of it.