REVIEW AND PHOTOGRAPHY BY: NITIN GUPTA. THANKS TO NITESH JAIN- THE PROUD OWNER FOR PROVIDING US WITH THE ZX10R 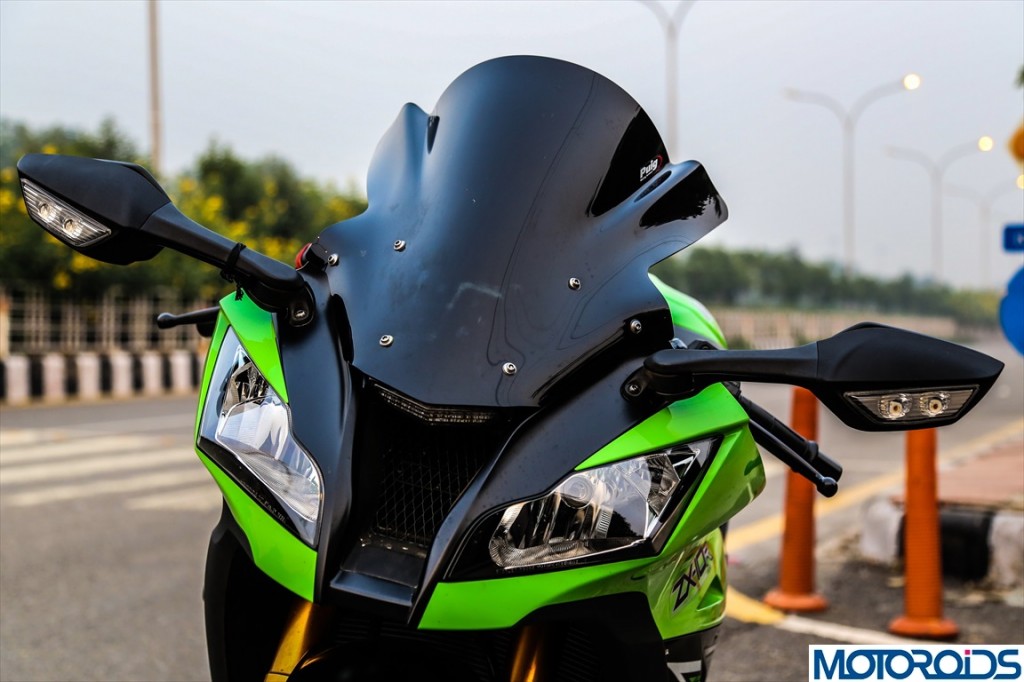 Green isn’t for ENVY anymore, it spells GORGEOUS and we’d say DROP DEAD GORGEOUS! Such is the aura of the 2013 Kawasaki ZX10R that it’s only seconds later you’d realize your wide open salivating mouth needs shutting. The ZX 10R would appear doing 200 kph even while standing still. But then the stunning design of the new litre class Ninja is only half of its equation. With a colossal 197 horses (207 bhp with ram air) at your wrist’s disposal, it’s relatively easy to assume the punch Green Goblin packs in. It was decided to put the figures from the spec chart to the real world and experience Kawasaki’s most powerful litre production bike yet. So here we go with our 2013 Kawasaki ZX10R review- rather our encounter with the devil dressed in green. 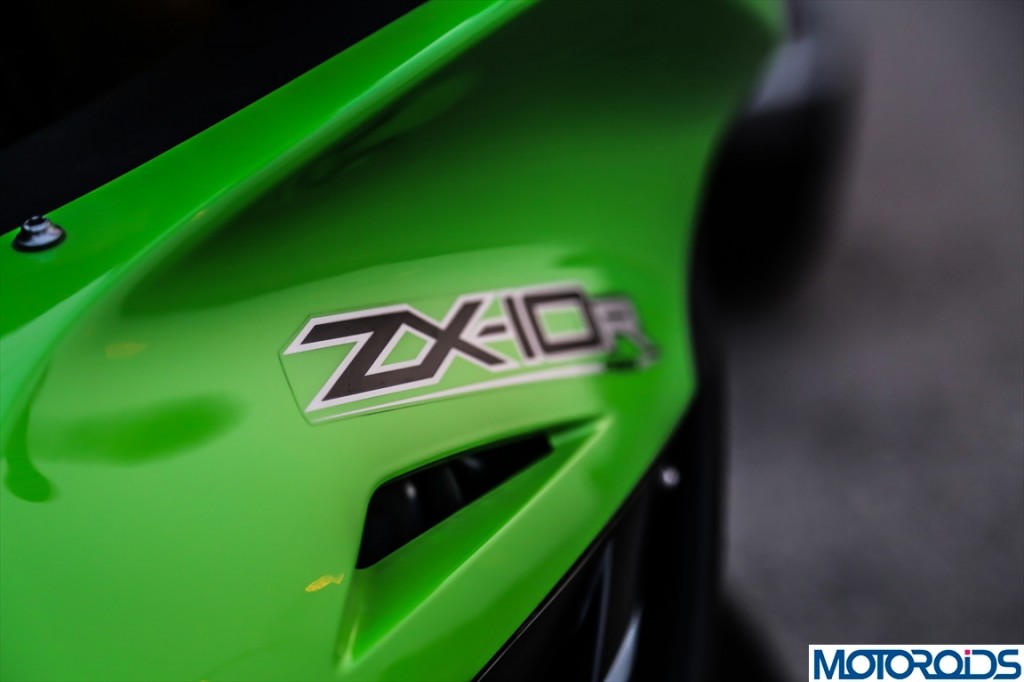 STYLING AND FEATURES: If looks could kill

The 2013 Kawasaki ZX10R is undoubtedly the meanest looking Ninja ever and looks a world apart from its older version. The angular streamlined body design with a pointy snout housing the ram-air duct graced by integrated LED line-beam headlights on either side is further complemented by the new mirror merged LED turn signals. A contrasting colour scheme of green and black with curves around the edges reek of a sharp and aggressive image. A short tucked away exhaust with an abbreviated tail is bound to take an eye and in every sense gestures that the slick new ZX10R means outright business. 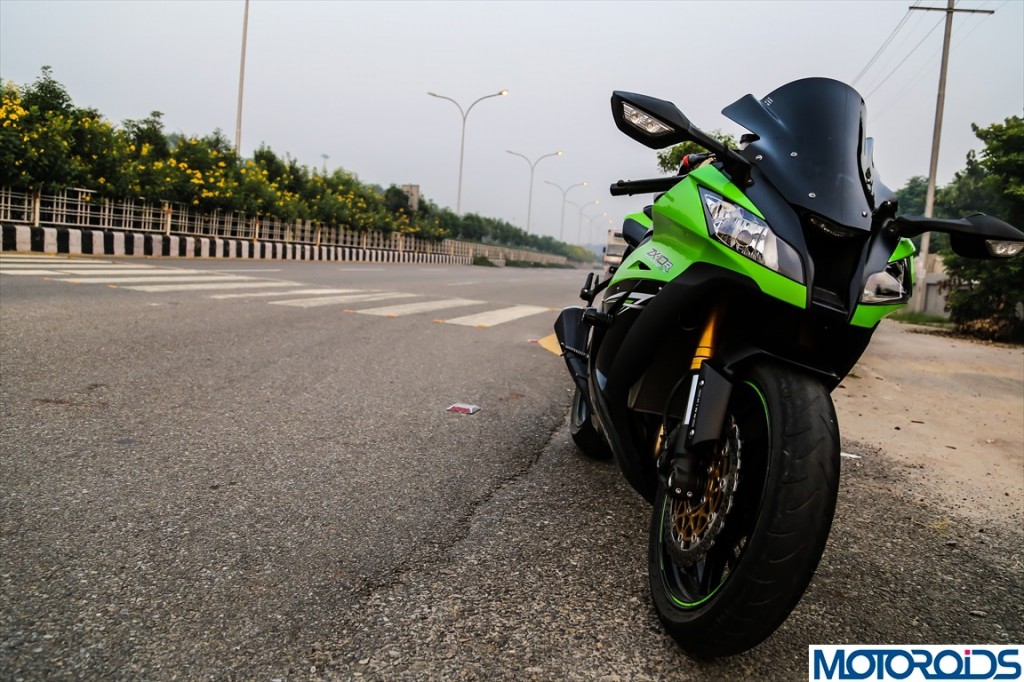 The instrumentation incorporates an LED backlit multi-feature LCD screen with various data panels. From a bar-graph tachometer above the LCD to data generated by the speedometer, odometer, dual trip meters and indicators for fuel consumption, low fuel, coolant temperature, Power Mode and S-KTRC level etc provide necessary information to the rider. The instrument panel is obviously the finest I have seen, you may take a while to get accustomed to the all digital console and red and orange lights of the RPM lights, which are initially yellowish orange and turn to RED once past the 7,000 RPM mark. The LCD screen during track days can be set to “RACE” mode where the gear display gets highlighted to the centre of the screen. 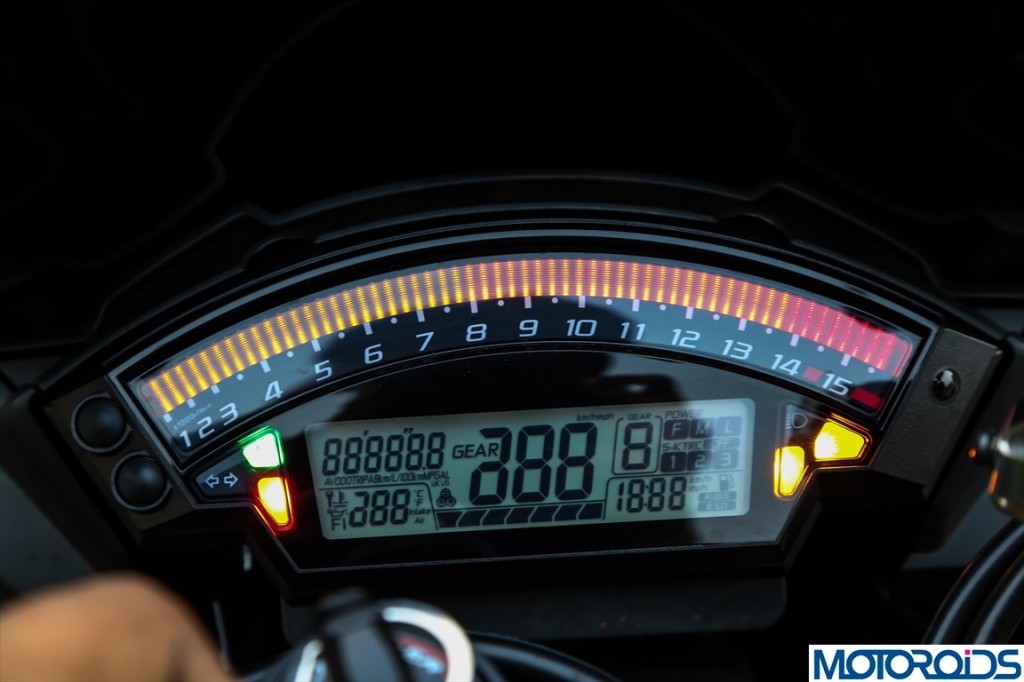 Despite Kawasaki’s focus of a race-replica while designing the new ZX10R, it renders better ergonomics to the rider than its predecessors- thanks to a lower seating position on a 32-inch saddle with adjustable footpegs and clip-ons. 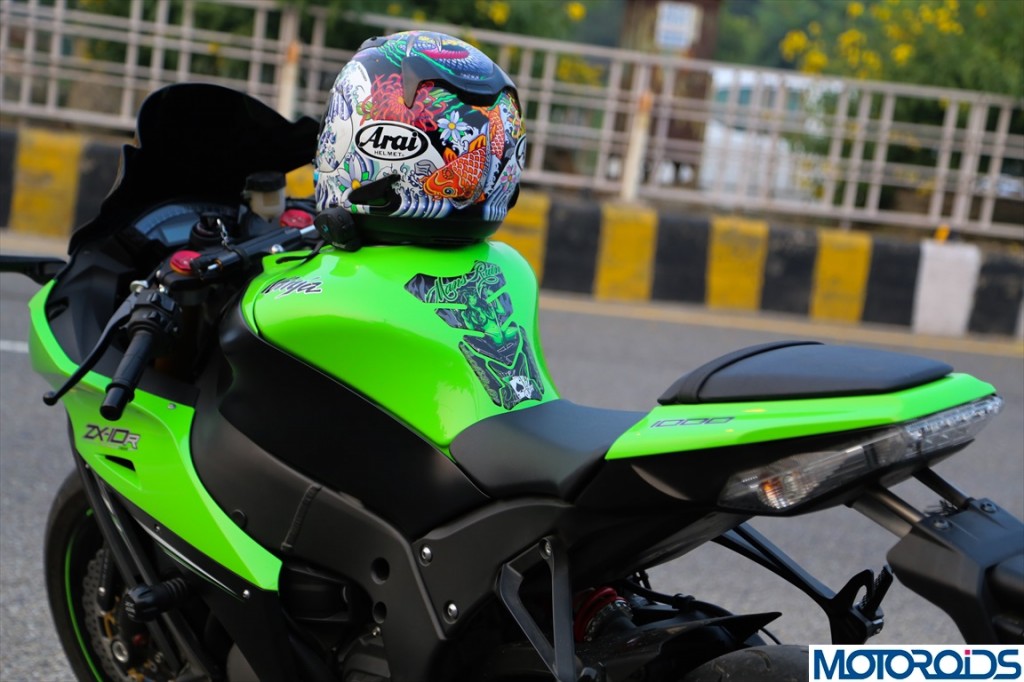 The 2013 Kawasaki ZX10R has managed to shed weight and is now 9 kgs lighter than the earlier variant- all thanks to a new lighter set of three spoke design cast aluminium wheels that replaces the earlier 5 spoke design along with a seven-piece lightweight aluminum twin-spar frame further contributing towards weight saving. The high-visibility LED tail light is mounted over the rear fender which along with the mirrors can be easily detached during track days. 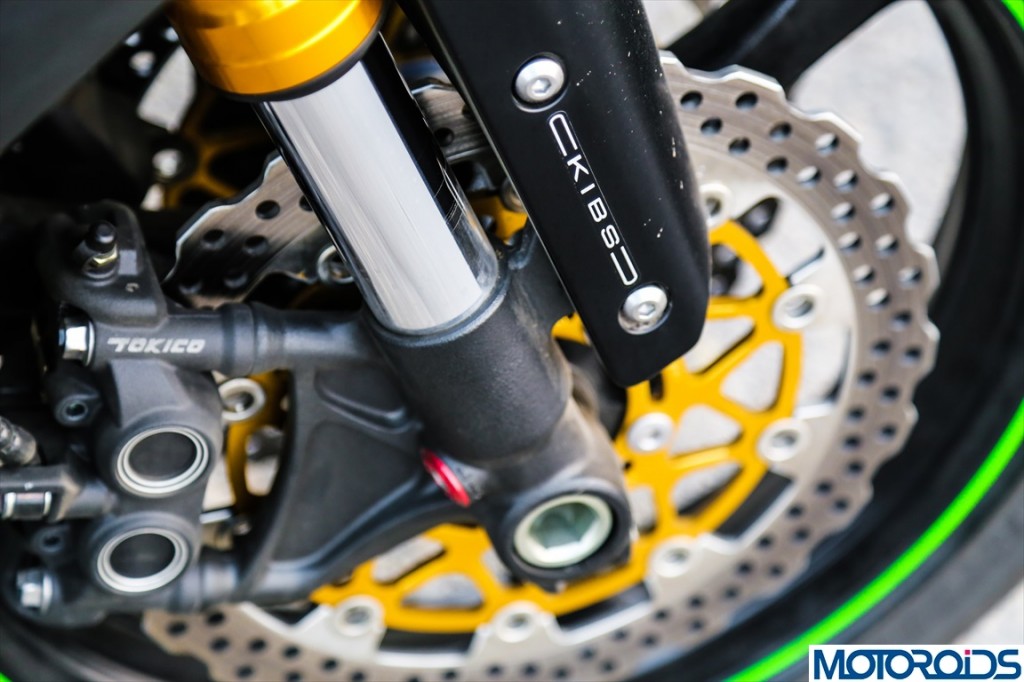 The ZX10R comes seriously equipped with new electronics. MotoGP derived Traction control, Ohlins equipped steering damper controlled by a dedicated ECU located under the tank, about which we shall talk in detail later in the review, and K.I.B.S (Kawasaki Intelligent braking System) for which you can pay a few extra thousands. Kawasaki terms it as KIBS, not just for name sake, but maybe because it is the smallest and lightest ABS unit ever made for motorcycles

Next page for PERFORMANCE

PERFORMANCE: The proof of the pudding….. 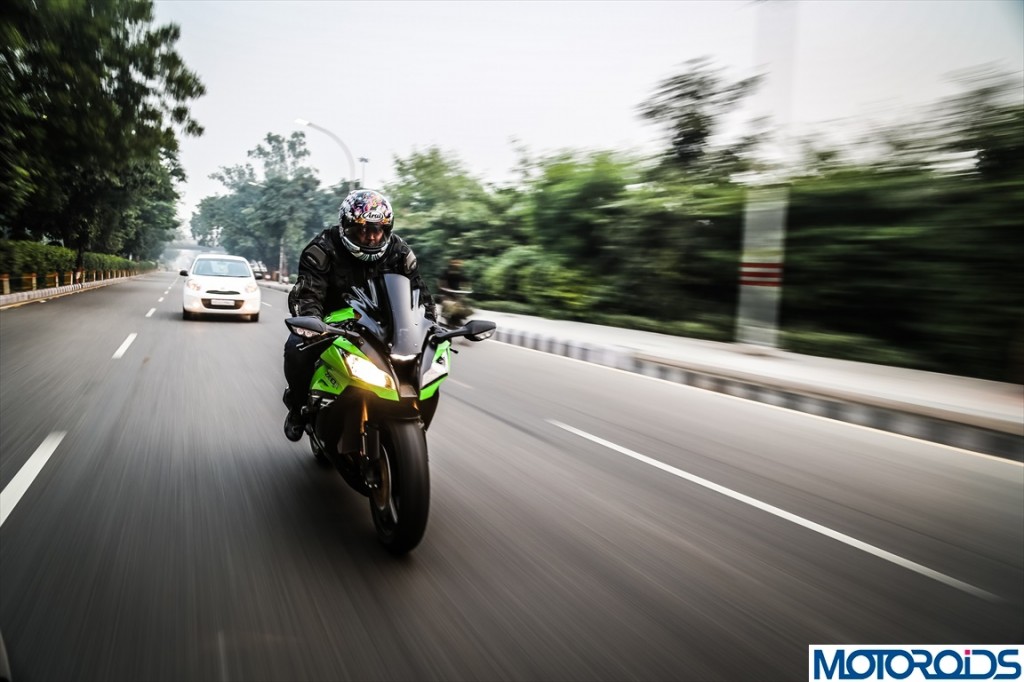 The 2013 Kawasaki ZX10R is impressively well balanced and agile in its handling. Riding the ZX10R gives you that assured feel of no compromise made on the stability and control even at peak performance with the bike screaming at its redline of 14,500 RPM. As expected from the 197 bhp stonker, the ZX10R comes alive with a raucous symphony of an inline four gathering thrust in quick linear fashion. Ride an old ZX10R and the new back to back- the difference between the two is evident at ease. 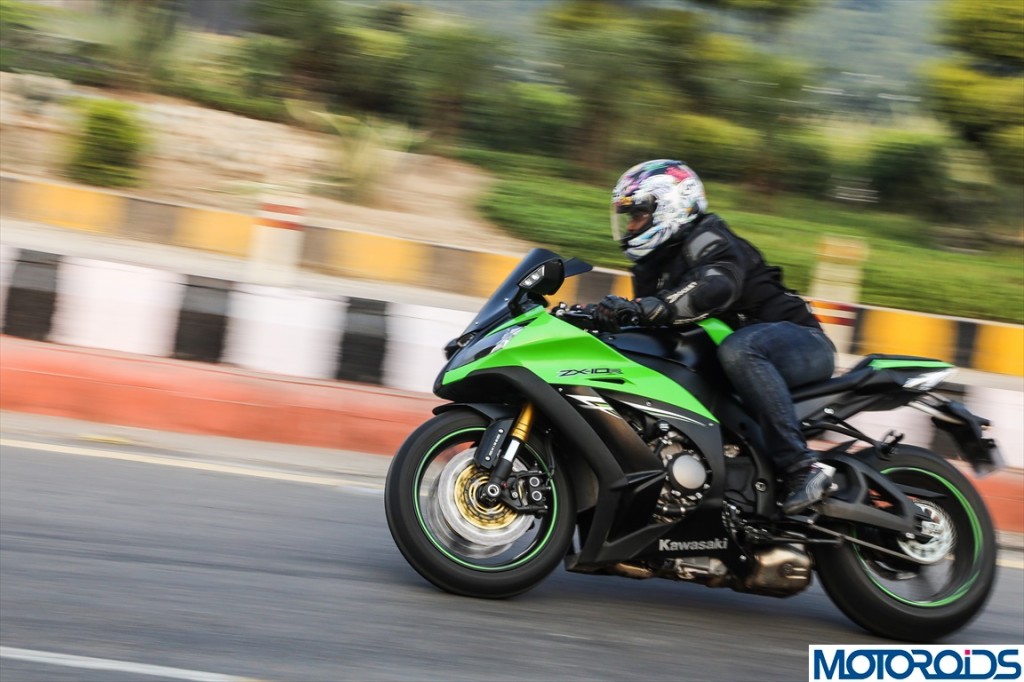 The all-cast seven-piece lightweight chassis though built with the ‘rigidity’ factor in mind, offers certain amount of flex characteristics for enhanced cornering performance. Though the flex would be hard to tell in everyday riding speeds, but push the bike harder into the corners and more so while going over minor undulations- you do realize the advantage of having a minor but right amount of flex on a motorcycle frame. 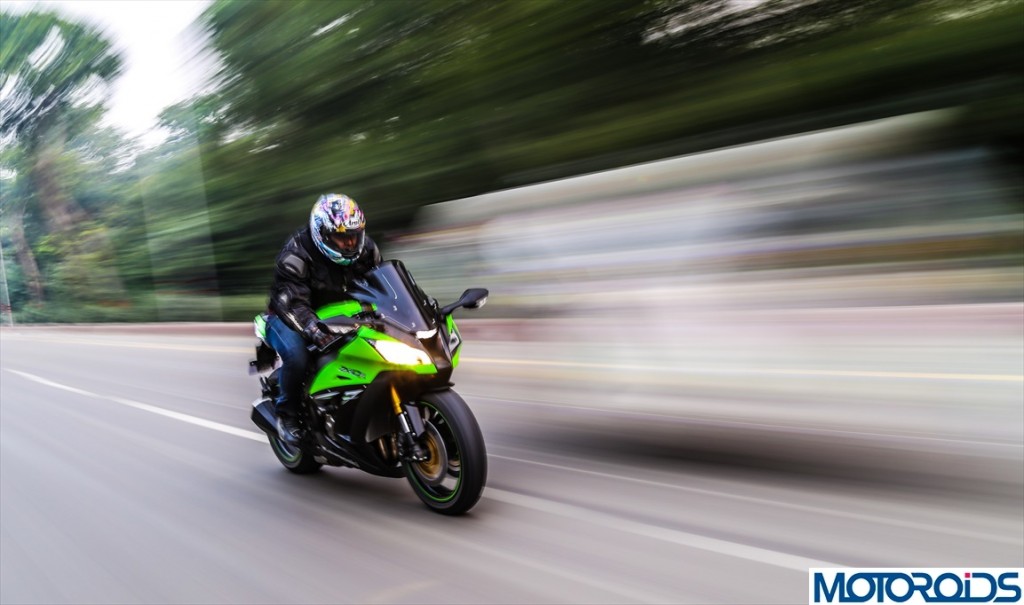 Other noticeable aspect is the three level SKTRC – abbreviated for Sport Kawasaki Traction Control intelligently senses the need for the traction control to kick in- though a little tyre slip is actually a good thing for the fun factor, but the onboard computer chip is quick to assess and analyze the loss of traction calibrating the spin to regain the lost bite- all this happens in a matter of milliseconds with near pin-point accuracy. Level 1 for maximum grip on track rather for someone who’s always hard on the gas, Level 2 for intermediate and Level 3 for slippery conditions with further three different power options of Full (F), Medium (M) and Low (L) giving the rider 9 set of modes to choose from. Coming to the real world, rather in our case- the best part was riding in the rain and the ECU was working seamlessly between 60% to 75% power according to the grip levels and we could switch between modes on the fly, eliminating the need to stop and then switch to a different mode. 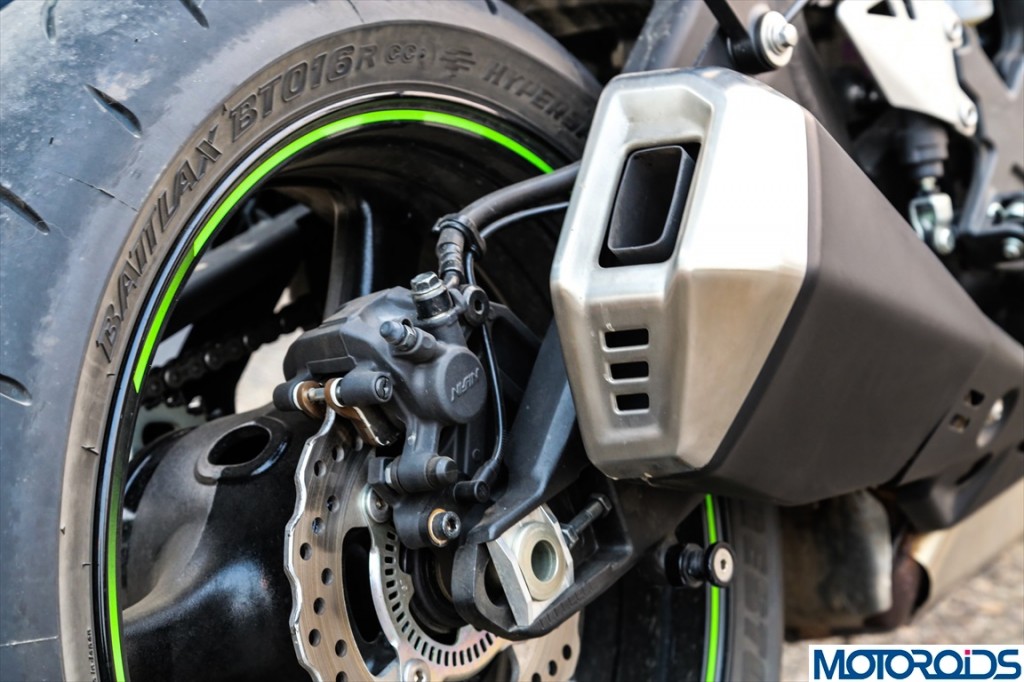 And that is not all, a new sports bike-tuned ABS system has been mated to the sophisticated traction control further enhancing the control and road-holding manners of the ZX10R. The Tokico 4 pot calipers might look identical to the naked eye, but the pistons in the calipers are of different sizes. Performance wise, the brakes are an absolute delight and the ABS works flawlessly well even under extreme hard braking with a pillion. 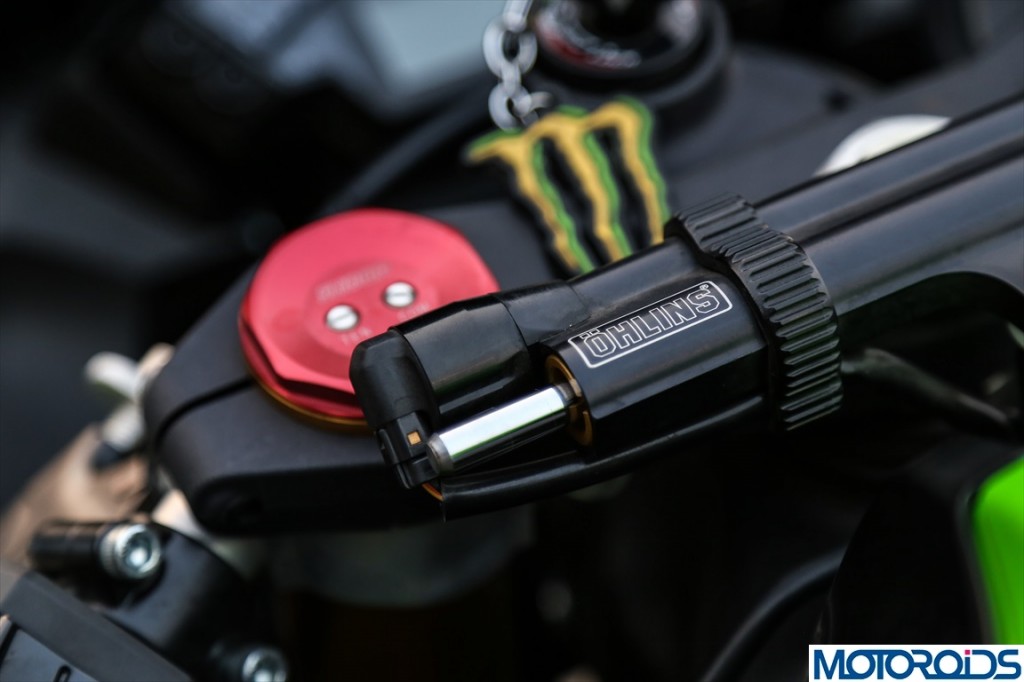 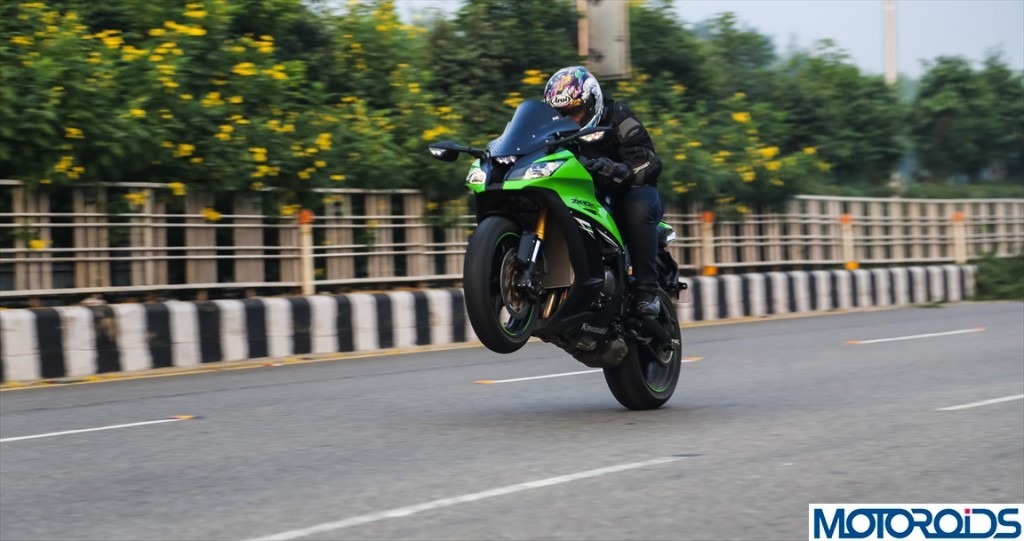 The 2013 Kawasaki ZX10R now features a new electronic steering damper developed in collaboration with Ohlins. The damper is controlled by a dedicated ECU located under the fuel tank and works in coordination with the acceleration and deceleration of the rear wheel thereby providing ideal levels of damping under varied riding conditions. Under Race Mode- the operation is so seamless, it’s hardly evident. Putting the new damper to the test, I pulled off a wheelie- and the smoothness with which the front tyre landed was amazing and void of any noticeable jerk. ‘STELLAR’ is the word.

Next page for CONCLUSION

CONCLUSION: Team Green is back! 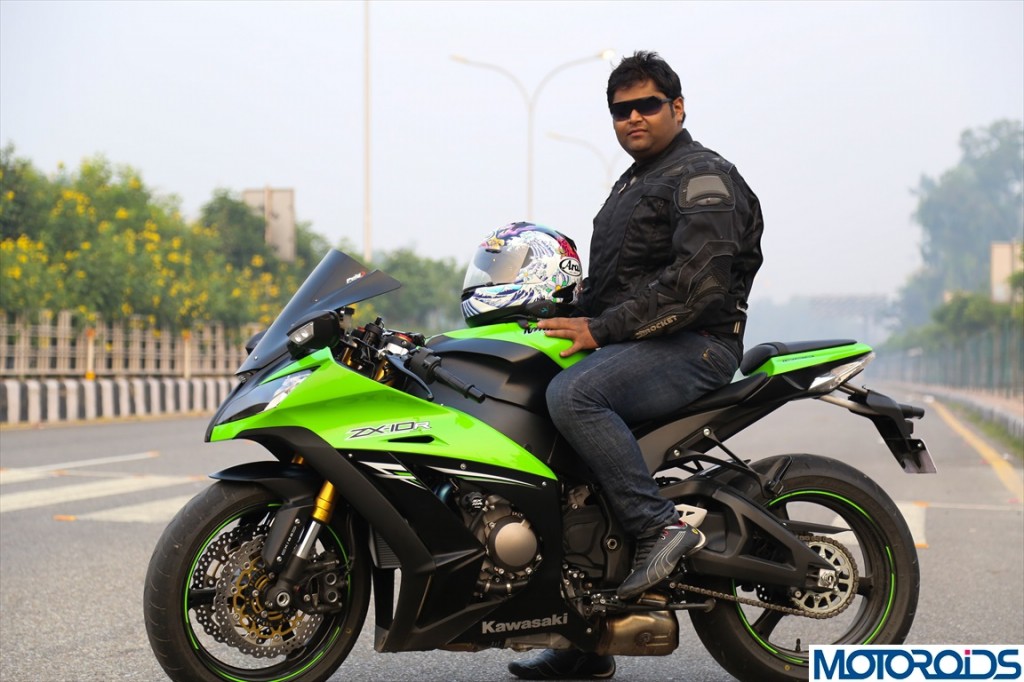 The overall ride of the ZX10R is extremely intuitive! Despite having designed as a track tool- the motorcycle is comfortable and easy to get around it. The low ride height with numerous suspension preload tweaks at both ends ensure you strike the right setting for your riding comfort. 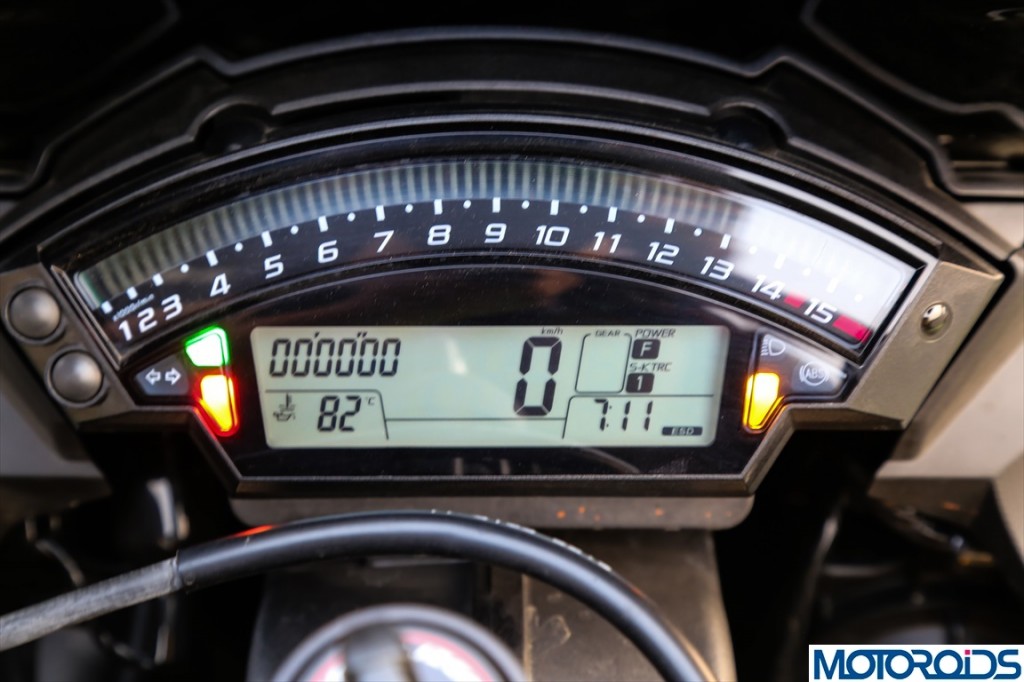 Overall, the 2013 Kawasaki ZX10R is an extremely polished product and is a giant leap for Team Green. Won’t be out of place to say that the bike has been the best offering yet from Kawasaki’s headquarters. Getting the near-perfect blend of shattering horsepower with intelligent electronic trickery makes it a formidable challenger for the litre-class superbike throne. 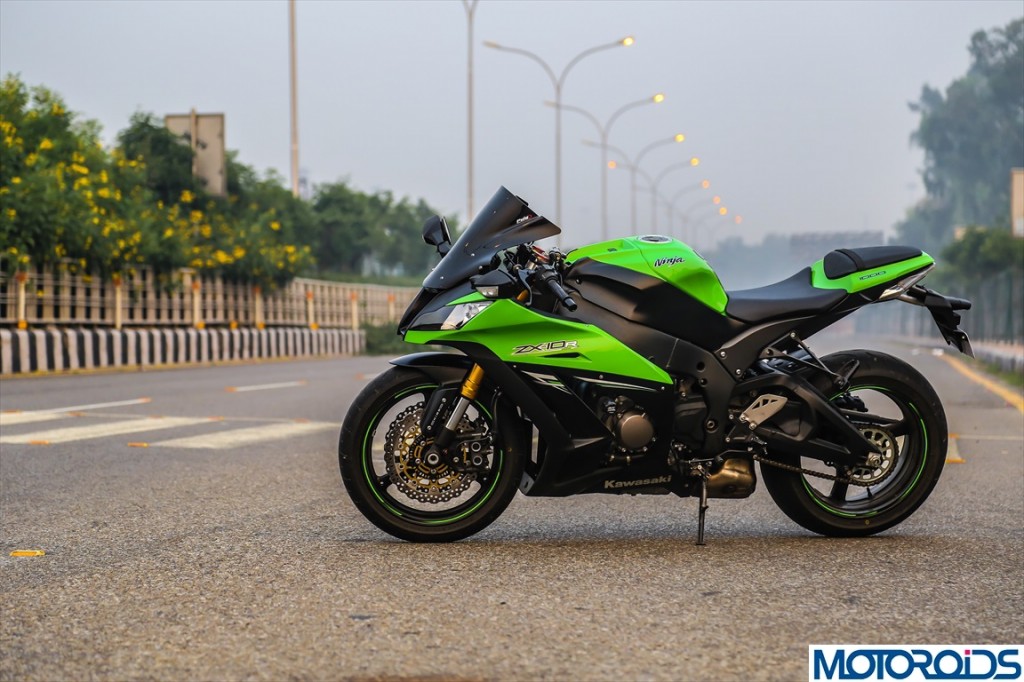 If one had to make a choice, particularly from the Japanese manufactured litre class (thanks to the S1000RR sitting in the other part of the world), there is absolute no doubt if any other motorcycle would be as convincing as the 2013 Kawasaki ZX10R to relent on a purchase decision.

AND A SET OF EYE CANDIES..JUST FOR YOU!