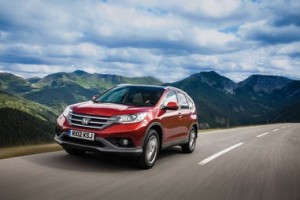 Honda reveals the new European CR-V at the Paris Motor Show 2012 with the announcement that the new CR-V will be offered with Honda’s new 1.6-litre i-DTEC engine. The new smaller diesel engine is the first in a series of engines to be introduced in Europe under the name of Earth Dreams Technology. The 1.6-litre i-DTEC engine will be available on the Civic later this year and the CR-V from September 2013 with production at Honda’s UK factory in Swindon.

The new fourth generation CR-V has improved quality, practicality and refinement. For the first time in Europe, the compact SUV will be offered with a choice of both two- and four-wheel drive, while improvements to both the petrol and diesel engines have resulted in a significant reduction in CO2 emissions. Comprehensively redesigned for the European market, the new CR-V will be built at Honda’s production facility in Swindon, UK from early September, 2012.The height of the car has been reduced by 30 mm compared with the current model, without reducing the interior space for the occupants. This represents the successful application of Honda’s man-maximum, machine-minimum philosophy. The introduction of easy fold-down rear seats has also made it possible to transform the CR-V from a five-seater to a versatile load-lugger at the pull of a handle.

Under the bonnet of the CR-V, customers will find either a 2.0-litre i-VTEC petrol engine or a 2.2-litre i-DTEC diesel. Both are developments of the engines found in the third generation CR-V but both have been comprehensively redesigned with a focus on reducing CO2 emissions. The CR-V will also be offered with Honda’s new 1.6-litre i-DTEC engine as a two-wheel drive model from September 2013.The first drivetrain from Honda’s new Earth Dreams Technology engine series to be introduced in Europe, it will be built at Honda’s manufacturing facility in the UK. The application of new high-strength material in the cylinder head has enabled Honda to deliver the world’s lightest aluminium open deck 1.6-litre diesel engine. These lightweight characteristics, along with the compact, high-efficiency turbocharger, will reduce response times and provide an impressive blend of performance and economy.

The new CR-V has been tested extensively in Europe and the McPherson strut front and multi-link rear suspension has been tuned for enhanced ride comfort and high speed stability. Motion Adaptive electric power steering (MA-EPS) has also been introduced, combining easy manoeuvrability with increased feedback and response at higher speeds. Petrol-engined models can be supplied with front wheel drive but most CR-Vs sold will continue to use Honda’s Real Time AWD system, which is now electronically activated for improved efficiency.

Honda’s Collision Mitigation Braking System (CMBS) and Adaptive Cruise Control (ACC) continue to be a part of CR-V’s safety equipment, and now for the first time on the CR-V they are complemented by Honda’s Lane Keeping Assist System (LKAS). In addition the new CR-V features Advanced Compatibility Engineering (ACE) Body Structure, a well-established part of Honda’s safety arsenal and is designed to absorb impact energy in the event of a collision and divert it away from the passenger compartment. The CR-V also comes with front, side and curtain airbags.

Efficient, functional and confident, the fourth generation CR-V builds on the success of its predecessors, of which over five million have been sold. “If you want to improve a vehicle that is already well balanced and respected, the only solution is to enhance that vehicle in every area while making it more efficient than ever before,” says Large Project Leader Ryouji Nakagawa. “That is what we have done with the new CR-V.”