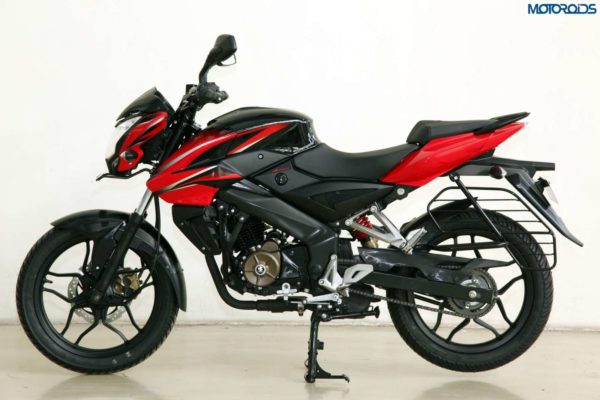 New reports suggest that the highly anticipated Bajaj Pulsar 150NS (Naked Sport) will be launched nationally in the period of May-June 2015, within a couple of months from now.  It  is still unclear whether the new model will replace the ageng 150 DTS-i, or both will continue to be sold alongside – mostly it’ll be the former, otherwise we’ll soon be losing count of Pulsars. To be clothed like the 200NS, the 150NS will essentially be a AS150 sans the half-fairing.

The 2015 Bajaj Pulsar 150NS will be powered by the same, 4 valve 149.5cc single cylinder air cooled engine from the AS150. Rated at a class leading 17 PS (16.8 bhp) of power and 13 Nm of torque, the motor will be mated to a 5 speed gearbox, apart from being wrapped around with the new perimeter frame from the AS150. For a full set of specifications on the 150NS, click here.

Other mechanical bits, including the suspension and rubber on the NS will exactly be the same as the AS, although the bike will feature new streetfighter styling cues and livery, which will be inspired from the 200NS –  so will be the new instrument cluster and split seat. Prices for the Bajaj Pulsar 150NS are expected to hover around the INR 73-75,000 mark, while it will compete against the likes of Suzuki Gixxer, Honda CB Unicon 160, Hero Xtreme Sport and Yamaha FZ F1 V2.0.