German luxury automobile manufacturer BMW has unveiled the M3 CS ahead of the model heading to showrooms early next year. The M3 CS tips the scales with a kerb weight of just 1585 kg, courtesy of the generous use of carbon fibre. The model will be limited to 2100 units across the globe. 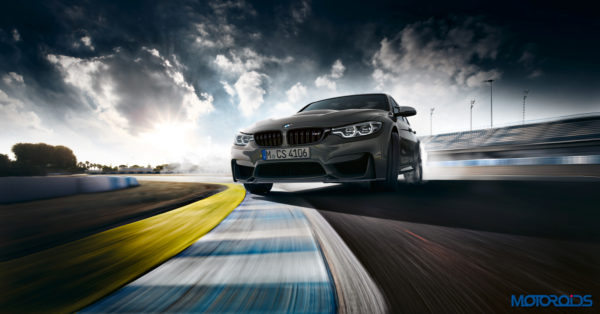 On the design front, the BMW M3 CS benefits from double LED headlights and a flat double kidney grille. The large air intakes serve to provide cooling to the engine and also the braking system. Made of lightweight carbon fibre, the splitter reduces the lift on the front axle. Also made of carbon fibre reinforced plastic is the new boot spoiler. This is an aerodynamic spoiler lip that not only visually sets a sporty accent, but also reduces lift on the rear axle. The rear diffuser, also made of CFRP, is taken from the BMW M4 GTS. 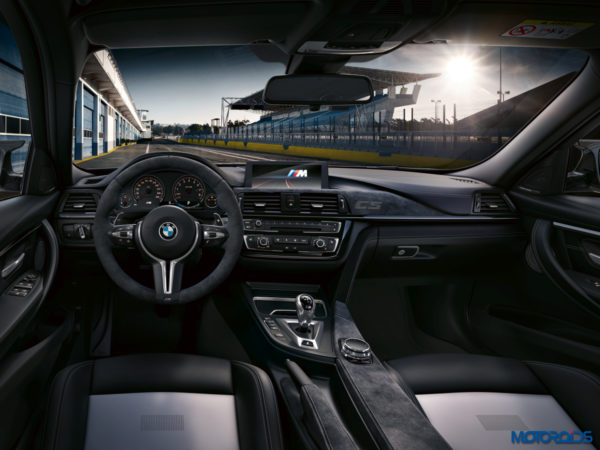 Inside, the new BMW M3 CS uses bi-colour Silverstone/Black leather and Alcantara. The M sports seats are shared with the M3 with Competition Package. BMW M stripes are incorporated in the front seat belts and seats. The rear seats also feature two-tone Merino leather in the same colour combination. BMW also offers an optional M Performance Alcantara steering wheel. It is covered in anthracite-coloured Alcantara and has a silver 12 o’clock marking. The handbrake lever is Alcantara with grey contrasting stitching, while a red start/stop button adds to the sense of occasion. The interior trim features Alcantara, with a CS model designation. There are also special door sills featuring the M3 CS logo. BMW will also climate control, navigation and a Harman Kardon music system. 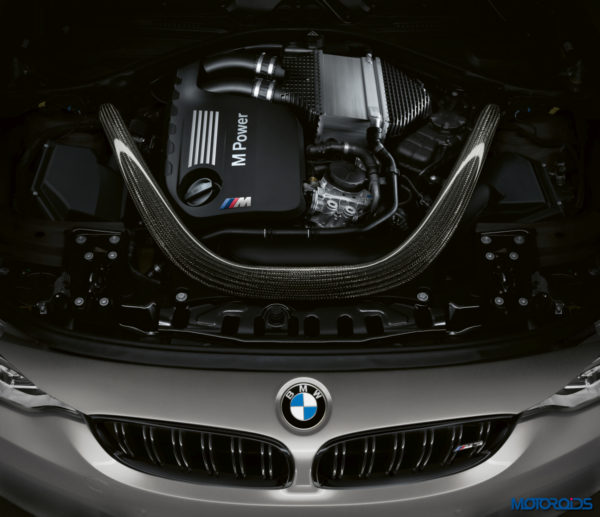 Power for the BMW M3 CS will be sourced from an in-line six-cylinder engine. The 3.0-litre M TwinPower Turbo engine has been tuned to produce 460 hp and 600 Nm of torque. Compared to the M3 with Competition Package, the maximum power has been increased by 10 hp. The maximum torque is about 10 per cent higher (M3 with Competition Package: 550 Nm) and is available from 4000 rpm to 5380rpm. The M3 CS can sprint from zero to 100 kmph in just 3.9 seconds. Thanks to the M Drivers Package, the maximum speed is limited to 280 kmph. Power is transmitted to the rear wheels via a seven-speed M dual-clutch gearbox with Drivelogic. The standard DCT gearbox can also be manually operated via paddles on the steering wheel.

BMW has also equipped M3 CS with a twin sports exhaust system with four tailpipes, integrated into the CRFP rear diffuser. It offers the lowest possible exhaust gas backpressure for power delivery and is controlled by a damper system. Incidentally, the driver can influence the mode of operation of the valve system by pre-selecting a driving mode. The tailpipes are made of stainless steel and carry the M emblem. 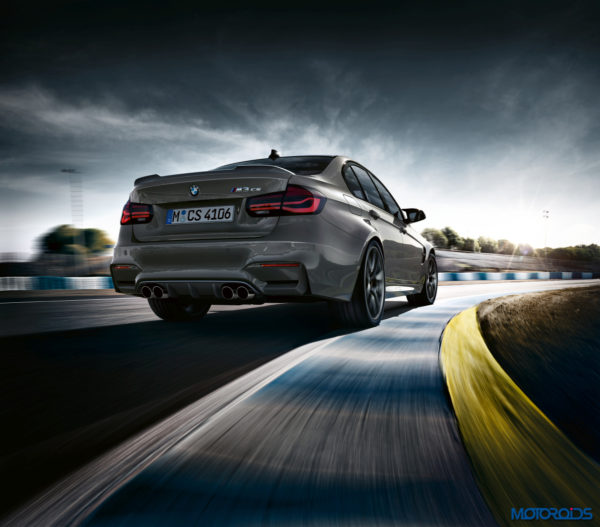 The new BMW M3 CS offers a multitude of options for adjusting the chassis, the electro-mechanical ‘M Servotronic’ steering, the DSC stability control system and the Drivelogic dual-clutch transmission. The CS is equipped as standard with Adaptive M suspension. Here, the driver can choose between three modes: Comfort, Sport and Sport +.The electro-mechanical steering of the M3 CS can also be influenced by three different characteristic settings. The chassis also includes the Active M differential, which boosts traction and suspension, optimized by means of an electronically controlled slat lock. The lock control unit communicates with the DSC (Dynamic Stability Control), and takes into account the accelerator pedal position, the wheel speed and the yaw rate of the car and adapts with precision to driving conditions.

Especially when driven hard on the race track, the driving stability components enable maximum traction under all conditions, such as powerful acceleration out of tight turns or on lanes with different coefficients of friction. The DSC normally counteracts understeer or oversteer by specific interventions in the engine and brake controls, but by switching to M Dynamic Mode (MDM) it allows more wheel slip, allowing for light drifts where track conditions allow. 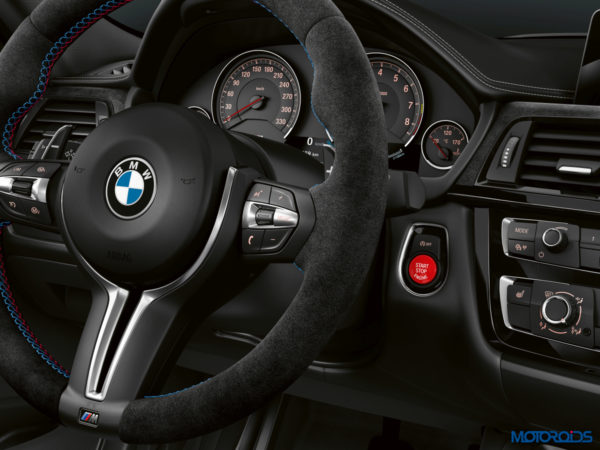 The chassis of the model is very similar to that of the M3 Competition Package, which was modified specifically to be even sportier than the already dynamically able M3. With a lightweight aluminium construction, it is characterized by low weight and rigid axles. At the front, it has a two-link strut behind a five-link wishbone, with forged aluminium hubs and calipers. The double-wishbone rear suspension is influenced by motorsport technology.

Another unique feature for the M3 CS is 10 spoke forged light-alloy wheels, finished in Matte Orbit Grey. As standard, the CS is equipped with Michelin Pilot Sport Cup 2 tyres, 265/35 R19 at the front and 285/30 R 20 at the rear. They are ideal for use on the race track and provide maximum grip. However, those who want to use the CS mainly in everyday life can opt for Michelin Pilot Super Sport tyres, which build more grip on wet roads than the Cup tires. 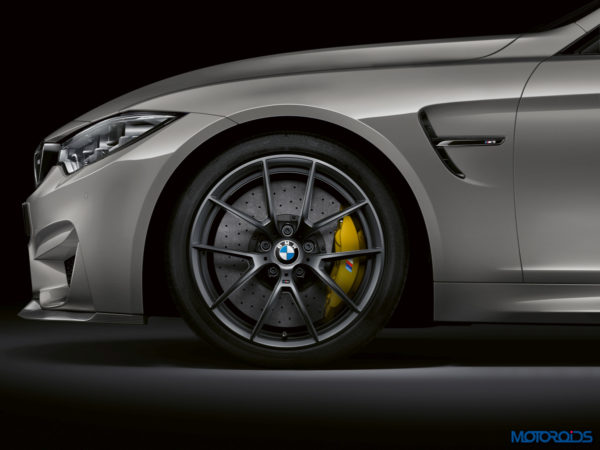 Like the M3, the new CS comes as standard with the BMW M compound brake, which works with four-piston calipers at the front and a two-piston system at the rear. Compared to a conventional brake system, the composite brake is characterized by its significantly lower weight which contributes to a reduction in un-sprung mass. As an option, the BMW M Carbon-Ceramic Brakes with six-piston front and four-piston rear calipers is available for the BMW M3 CS, which is even lighter, withstands the highest loads, such as race track use, and is even more durable.