The 2018 A7 evolves and finesses every facet of the Sportback theme without losing sight of the hallmarks behind its original appeal. The exterior design of the A7 Sportback is an expression of the new design language that Audi introduced with the prologue study and that made its production debut in the new Audi A8. The new Audi A7 Sportback will initially launch with the 3.0 V6 TFSI petrol engine. Here’s everything you need to know about the new 2018 Audi A7 Sportback.

The previous generation model was available with prices starting from INR 65 lakh. We expect the new model to carry a slight premium over the discontinued model. 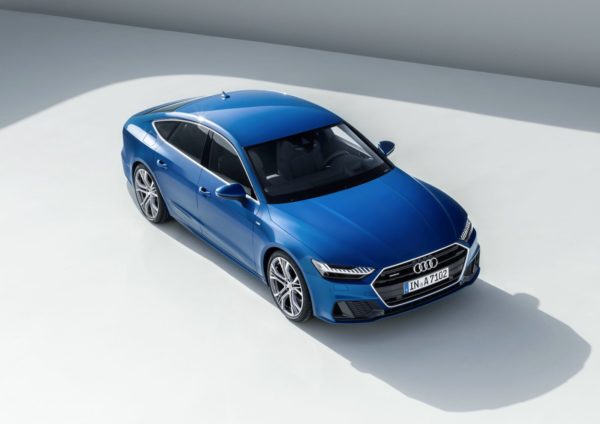 The UK orders will commence from early 2018 while the first deliveries will start in second quarter of 2018. The India launch details are yet to be revealed but expect the new A7 will most likely arrive in the second half of 2018.

Up front, the new A7 Sportback features Singleframe grille – wider and lower than that of the Audi A8 – narrow headlights, contoured air inlets and the flat front end. In some versions the light signature takes up the subject of digitalisation: 12 adjacent lighting segments separated by narrow intervening spaces evoke associations with the binary digits 0 and 1. The top lighting configuration is the HD Matrix LED headlight with Audi laser light. 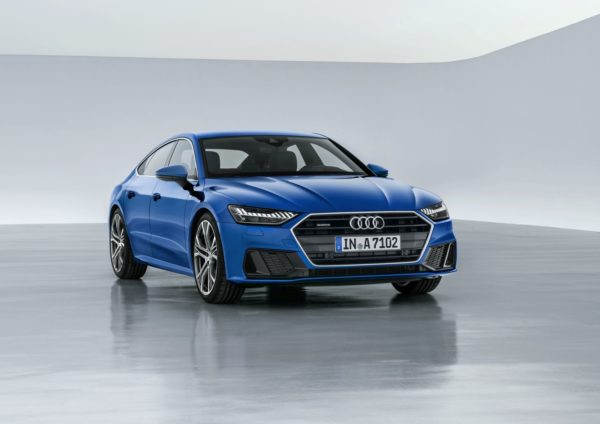 With its long bonnet, long wheelbase and short overhangs the A7 Sportback looks lean and muscular. It is 4,969 millimetres long, has a wheelbase of 2,926 millimetres and is 1,908 millimetres wide, but stands only 1,422 millimetres high. Pronounced contours emphasise the wheels, which measure up to 21 inches in diameter, and reference Audi’s quattro genes. These genes determine the proportions of the vehicle’s body. The silhouette is defined by the dynamic roofline, which drops sharply towards the rear.

As with the previous model, the tapered rear with its long luggage compartment lid terminates in a pronounced, curved lip from which an integrated spoiler extends automatically at 74mph and above. A flat light strip – a design feature common to all of Audi’s top models – joins the rear lights, whose tail lights are made up of 13 vertical segments. The progressive exterior design of the new Audi A7 Sportback is largely devoid of embellishment, and is presented in a choice of 15 colours, eight of which are new. S line models further hone the look through modifications to the radiator grille and the front air inlets, the sills and the front and rear diffusers. 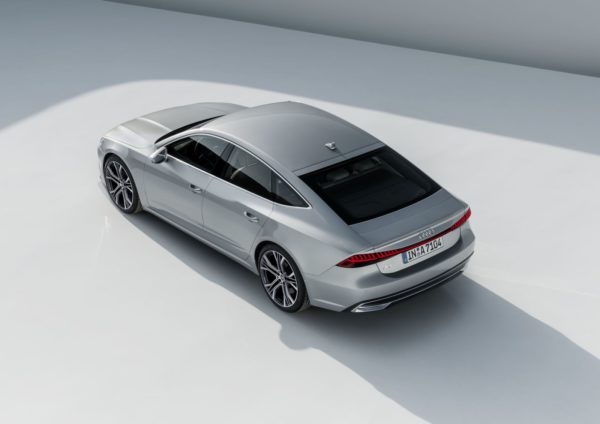 The interior of the new Audi A7 Sportback has been conceived according to a reduced, clean design language. All colours, upholstery materials and inlays reflect the new aesthetic. The 10.1-inch upper display (in combination with MMI navigation plus) is tilted towards the driver, and with its black panel optics and graphite grey aluminium clasp, almost disappears into the dashboard when switched off. Compared with the previous model, interior length has increased by 21 millimetres, resulting in more rear knee room. Rear passengers also enjoy more head room. The loading width has also increased compared with the previous model and now measures 1,050 millimetres. The luggage compartment has a base capacity of 535 litres which increases to 1,390 litres with the rear seats folded down.

The new Audi A7 systematically continues the digitalisation strategy of the A8. The interior architecture melds seamlessly with Audi’s new MMI touch response operating concept. It replaces the rotary pushbutton and the conventional buttons and controls of the previous model with two large, high-resolution touch displays. 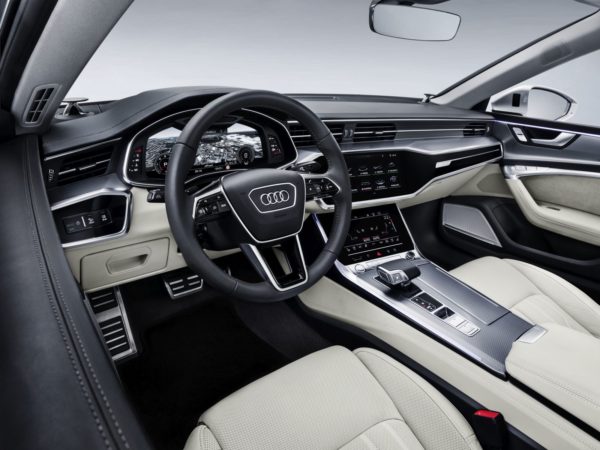 With the AI button, the driver will be able to activate the Audi AI remote parking pilot and the Audi AI remote garage pilot, which will be made available during 2018. They autonomously manoeuvre the A7 Sportback into and out of a parking space or garage. The driver can get out of the car before launching the function via the myAudi app on their smartphone. To monitor the manoeuvre, the driver presses and holds the Audi AI button throughout.

In addition to the Audi AI systems, the new A7 Sportback features a total of 39 driver assistance systems to make daily use easier for the driver. They are split into three packages: the Audi AI parking package (gradual introduction beginning in 2018), the City assist package with the new crossing assist, and the Tour assist package. The latter includes such things as the efficiency assistant, which facilitates a driving style conducive to reducing consumption, and the adaptive driving assistant (ADA), which supplements the adaptive cruise control (ACC) with helpful steering interventions designed to keep the car in its marked lane. All driver assistance systems feature improved control mechanisms. 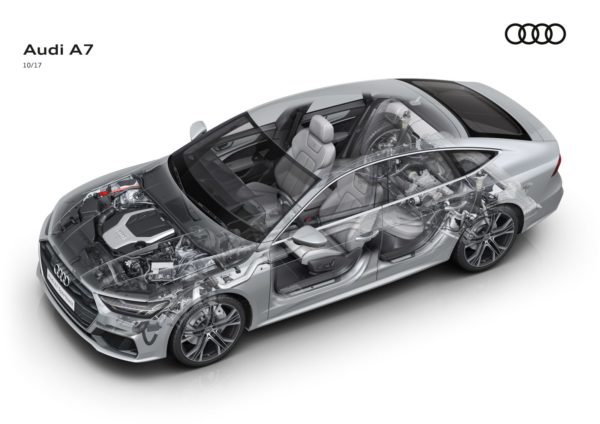 The role of the Grand Tourer as a haven of comfort during effortless trans-continental journeys is also facilitated by the platform underpinning the new A7 Sportback. The new electronic chassis program (ECP) – the central controller for the chassis – and the updated air suspension are aimed to make it even more comfortable yet also appreciably more nimble and agile.

All A7 Sportback models will be equipped with a new mild hybrid system (MHEV). With the V6 engines, this uses a 48-volt primary electrical system. A belt alternator starter (BAS) works together with a lithium-ion battery and achieves a recuperation performance of up to 12 kW when braking. At speeds of between 34 and 99mph, the large coupé can coast in freewheeling mode with the engine deactivated and then restart comfortably via the BAS. 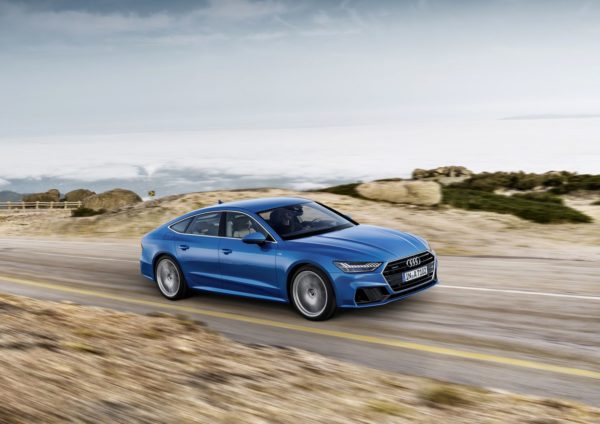 The new Audi A7 Sportback will initially launch with the 3.0 V6 TFSI petrol engine. The V6 turbo produces 340PS and 500 Nm (368.8lb-ft), propelling the five-door coupé from 0 to 62mph in 5.3 seconds and on to a top speed of 155mph. The 3.0 TFSI is paired with a seven-speed S tronic twin-clutch transmission. Additional six- and four-cylinder engines, both petrol and diesel, will follow shortly after the start of production.

With its comprehensive connectivity, the Audi A7 is perfectly equipped for long-distance touring. It offers customers the same broad range of convenience, safety and customisation technologies as the new Audi A8. 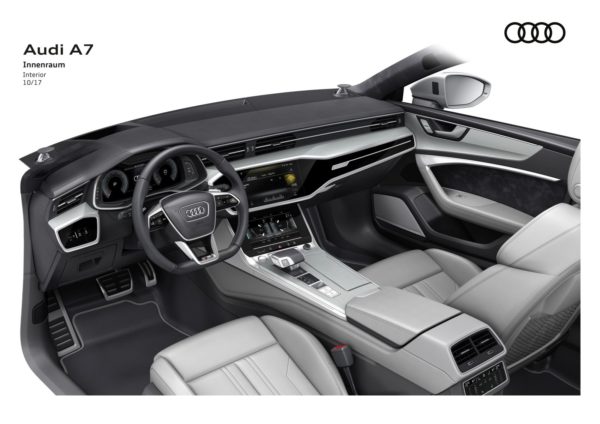