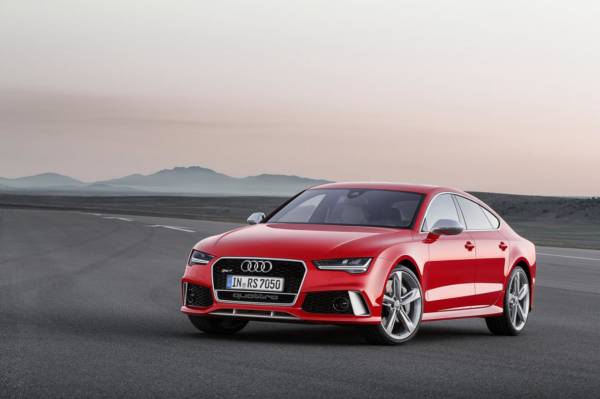 The most important change is the inclusion of matrix LED headlights (optional) which have been introduced on the A8/S8 facelift. On the interior front, the cabin receives a  revised instrument cluster along with tweaked air outlet controls, updated shift paddles, quattro emblem and an updated MMI infotainment system with MMI touch.

Powering the facelifted RS7 is the same twin-turbo V8 4.0-liter TFSI engine which receives cylinder-on-demand technology. This twin-turbo V8 churns out 560 PS (412 kW) of max power and 700 Nm (516 lb-ft) of peak torque. The 560 PS of power catapults the RS7 Sportback to 62 mph (100 km/h) from standstill in 3.9 seconds before reaching a top speed of 190 mph (305 km/h) with the optional dynamics package. All that power is transferred to a quattro all-wheel drive system through an eight-speed tiptronic gearbox. The RS7 returns a fuel efficiency figure of 24.8 mpg US (29.7 mpg UK or 9.5 liters / 100 km) with corresponding CO2 emissions of 221 g/km.

The 2015 Audi RS7 Sportback facelift is shod with 20-inch forged alloy wheels. 21-inch alloys in three color finishes are also available as an option. At an additional cost, the car can be ordered with carbon fiber ceramic disc brakes.

Sales of the 2015 Audi RS7 are set to commence in the third quarter of the year, with pricing in Germany beginning at 113,300 EUR.