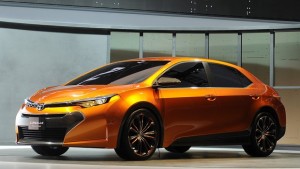 It has emerged that the new 2014 Toyota Corolla will make its public debut on June 6. The revelation was made through a post on the carmaker’s official Facebook page and the Japanese automaker giant has asked its fans to “get excited.”

The Corolla has been among the most successful of all cars from the Japanese biggie and the midsize sedan has been posting decent sales numbers on US car sales charts since quite some time now. The car has a big fan following and hence, it is only logical that the arrival of the next gen car has been eagerly awaited by everyone.

It was earlier being said that the new Corolla won’t be launched before the end of 2014. However, tough competition in the form of the Ford Focus, Hyundai Elantra and the new Honda Civic has made the boffins at Toyota to reschedule the launch of the new car to an earlier date.

If the supposedly ‘leaked photographs and patent drawings’ are anything to go by, the new car can be expected to come with a softer exterior styling with design cues taken from the Corolla Furia Concept. Regulars here would remember that we reported in detail when Toyota gave us a glimpse of the next gen Corolla by coming out with the Furia Concept.

Powering the new 2014 Toyota Corolla could be a 1.8-liter four-cylinder petrol engine that would benefit from the VVT-i tech (what else?). The car could come mated to a new CVT ‘box. The India spec car would of course get a 6-speed manual transmission.