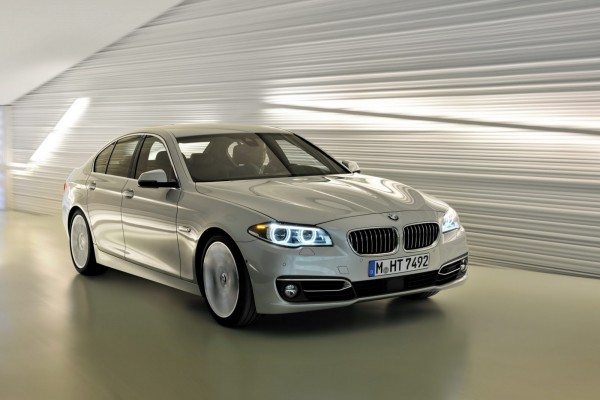 We reported in detail when official details of the 2014 BMW 5 Series LCI (Life Cycle Impulse) first emerged on the cyber space.

The new 2014 5 Series facelift will go on sale in many international markets within next three months and we finally have concrete information on the specs and variants of the recently unveiled Bimmer.

At the bottom end of the 5 Series petrol engine variant line up would be the 520i. This variant is powered by a 1997cc inline-four cylinder engine that benefits from BMW TwinPower Turbocharger. The motor has a max power output of 184bhp and a peak torque figure of 270Nm. The car can hit 100kmph from standstill in 7.9 seconds and has a top whack of 235kmph.

The high end 535i petrol variant has a six cylinder engine that is aided by a turbo. The motor has upwards of 300bhp and 300Nm of torque. The car is capable of hitting 100kmph from zero in less than 6 seconds.

The diesel engine line up will start with the 520d and will be followed by a 525d and a 530d. However, don’t be too surprised if the recently introduced 518d comes to India along with the facelift.

It is being said that the new 2014 BMW 5 Series LCi (Life Cycle Impulse)/facelift won’t come to India before the beginning of 2014. However, with arch rival Mercedes launching the E Class facelift in India on June 25, don’t be too surprised to see BMW India re-scheduling the launch of the new model to an earlier date.