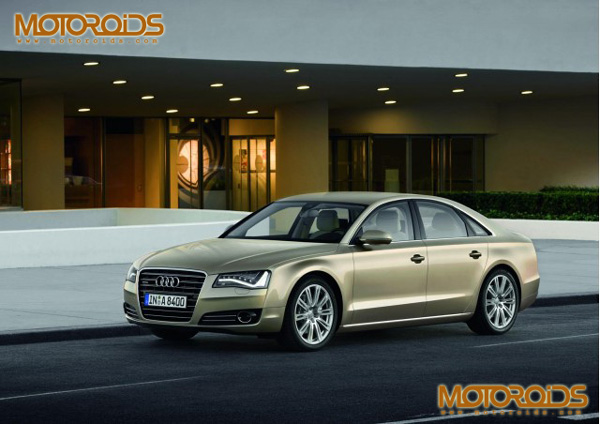 The Audi A8 was launched earlier this year which makes it the German automaker’s latest offering in its class. The Audi A8 is scheduled to hit Indian roads by Diwali this year. With a price tag similar to that of the Mercedes Benz S-Class and BMW 7 Series (about Rs 73 lakh ex showroom Delhi), the car will hit the Indian streets in a slightly modified avatar. India is a country where only performance will do no good. Comfort has to go hand in hand with performance. Hence, the India bound Audi A8 will feature a longer wheelbase by 5 inches thus making the rear seats more comfortable and roomy.

The 2011 Audi Audi A8 rides on a a new aluminum spaceframe making it another offering in Audi’s lightweight fleet of cars. The car will be available in 3 engine options including the 3.0 V6 TDI (same as the A4, A6 and Q5), the 4.2 V8 TDI (same as Q7) and  the 4.2 DOHC V8 FSI and W12 engine. The 3.0 V6 TDI and the 4.2 V8 TDI churn out 240 bhp and 350 bhp of power respectively. The engines will be mated to a ZF-supplied eight-speed automatic transmission with paddle shifters and will feature Quattro four-wheel drive as standard. The car will also feature a sport differential option which will split torque between the rear wheels.

The 2011 Audi A8 will boast of a new safety feature called pre-sense. This safety feature is a four-stage collision warning system which automatically activates the hazard lights, pre-tensions the seat belts and shuts the windows in case the brakes are pressed completely. It will also include night vision with pedestrian detection, a blind-spot monitor, adaptive cruise control with stop-and-go capability, and a lane-departure warning system complete with vibrating steering wheel.

The car’s wheelbase has been extended by 5 inches in order to enhance the comfort of the rear seats. To add to this, the 2011 A8 will also be available in an optional variant with reclining rear seats, massage, and foot rests. The car’s interior is crafted with utmost care and quality improving its already best interiors.

Go to page 3 for the complete picture gallery!