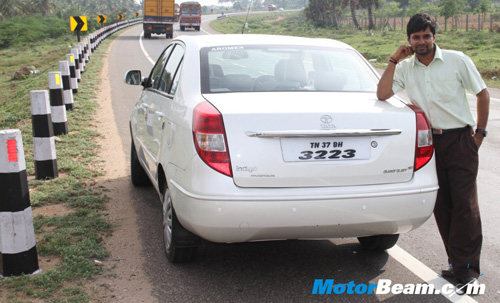 No matter how powerful or how stylish a vehicle may look, in India, people first prefer mileage. Most 150cc 2-wheelers return an average efficiency figure of about 46 kmpl* and if the correct riding technique is applied while commuting, the bike may return a figure much higher than that. But achieving an efficiency figure similar to that from a car would be insane. However, our friends at Motorbeam have featured Mr. Narayanan’s Tata Indigo Manza which has proved to be unique. The car has returned an efficiency figure of an unbelievable 46.32 kmpl.

Mr. Narayanan achieved this efficiency figure on the 25th of May 2010 and the report has been sent to the Limca Book of Records after tests were conducted as per their instructions. The reports have been cross checked and has been proved to be true. The car is absolutely stock and is not modified or tuned in any way. It was Mr. Narayanan’s driving technique that helped him achieve such a mind boggling figure. Tata Motors gifted him with a set of brand new alloy wheels as an appreciation of his efforts.

However, Narayanan’s journey does not end right here. He now aspires to make a record of achieving a fuel efficiency figure of 50 kmpl and has already applied for the Guinness Book of World Records. Mr Narayanan has also promised to let the world know about his driving techniques which will help people to save fuel! Let’s keep our fingers crossed and hope he turns out to be successful in achieving 50+ kmpl.

*May vary from person to person or bike to bike.