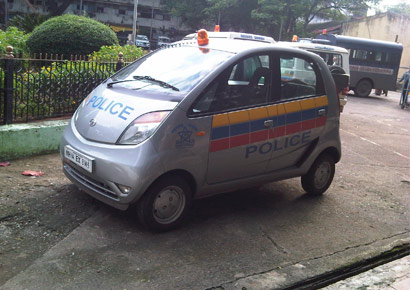 Mumbai Police is contemplating using the Nano as a patrol vehicle. The picture you see here is that of a trial vehicle that Mumbai Police Department is currently testing to evaluate its suitability as a patrol and pursuit (ahem!) vehicle.

Tata Motors took the lead and offered the services of the car to the city police. Some interaction happened between Tata Motors and Mumbai Commissioner of Police after which one car has been kept by Mumbai Police to carry out trials.

“We use motorcycles to do patrolling in narrow lanes in the city. However, Nano car has more than one advantage, while it takes less parking space as compared to other Sedan cars, it can replace bikes as far as doing night patrolling is concerned and weapons can also be stored in the duct of the car,” said a senior police officer.

Nothing concrete has been decided yet though, and a decision will be taken only after taking into consideration the suitability of the vehicle for the job.