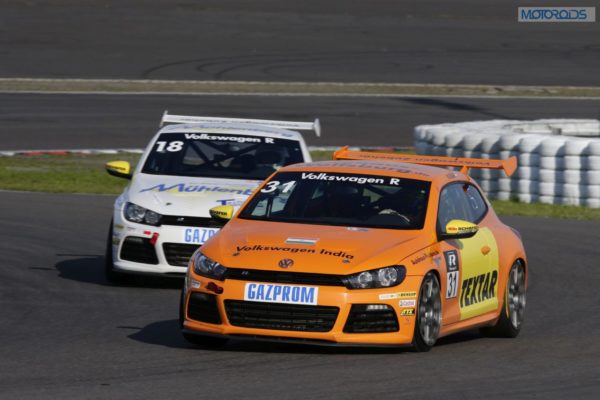 Mumbai boy, Rahil Noorani finished in 16th and 13th position in Race 1 and Race 2 respectively of the Volkswagen Scirocco R-Cup at Nurburgring, Germany. Rahil had qualified in 23rd for the Race 2 of the weekend. However, with excellent drive through the race and by keeping his cool throughout, Rahil drove steadily up the order to finish in 13th. Starting at the back of the grid, Rahil had an uphill task but he focused on using his push to pass cleverly on the track. In the initial laps, there was an incident in the third sector as few drivers did not follow the yellow flag regulations and were penalized with a drive through. Making full use the situation, Rahil drove aggressively to climb up into the 13th and held his position there despite pressure from faster drivers from the back.

Rahil improved his lap times throughout and finished with a fastest lap time of 1:43.8268 which was a further improvement over yesterday’s qualifying’s timing.

Commenting after the race, Sirish Vissa, head of Volkswagen Motorsport said, “Rahil has put up a great show in this round of Scirocco R-Cup. He has constantly improved through the sessions and we have seen that his lap times tell the same story. 16th and 13th finish at his debut amongst the international competitors, in a faster car, on a challenging new track was indeed an impressive result.”

Rahil Noorani said, “The weekend has turned out to be a fabulous one. I am extremely satisfied with the performance I put up. 16th in Race 1 and then in 13th in race 2 was not what I had expected initially. But as I got more and more track time in the car, I could go faster and improve my lap times. I would like to thank Volkswagen Motorsport India to give me this great opportunity. I could learn quite a lot over the weekend which will definitely help me in the long run.”

Earlier, Race 1had started in tricky conditions amidst drizzle while the drivers were on the grid with slicks. Although, the track started drying up quickly, it was still slippery for the racers. Rahil kept his cool and stayed on track throughout. As the track dried up, he improved his lap time. Slowly and steadily Rahil made his moves and climbed up to the 16th position and finished in that position. With fastest lap of 1:44.051, he was only 1.76 seconds off the pace.