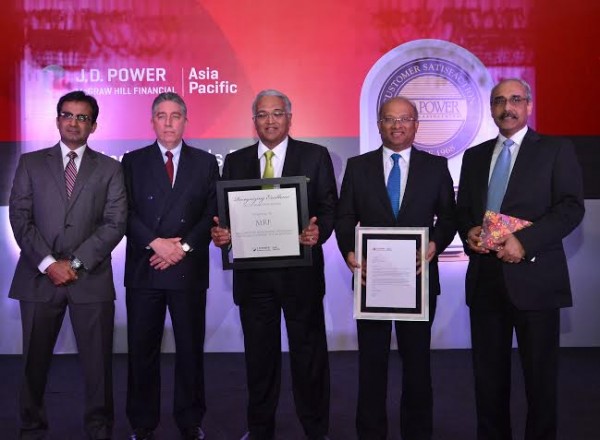 MRF, the 15th largest tyre company in the world, has been honoured by J.D. Power with a Special Recognition Award for continued outstanding performance in Original Equipment Tire Satisfaction Studies conducted by J.D.Power.

This Special Recognition Award was presented to the MRF Chairman and Managing Director, Mr. K.M. Mammen at a ceremony in New Delhi on 11th March 2014 . Present in the function were the Heads of the Indian Automobile Industry & key executives of all Car companies.

Mr.K.M. Mammen thanked the Indian customers for their continuing trust in brand MRF and mentioned that this unique recognition was indeed a boost to the organisation as the Company continues to expand its presence and footprint with the single focus of delighting the customers.

According to Industry experts, car manufacturers who are going through difficult times are preferring to fit their Original Equipment Cars with Tyre brands which have acknowledged customer preferences and rankings from such reputed Studies. MRF Radials, has maintained this consistent record of the top ranking in the TCSI Study and hence is in an unique position of being sought after by Original Equipment Manufacturers.