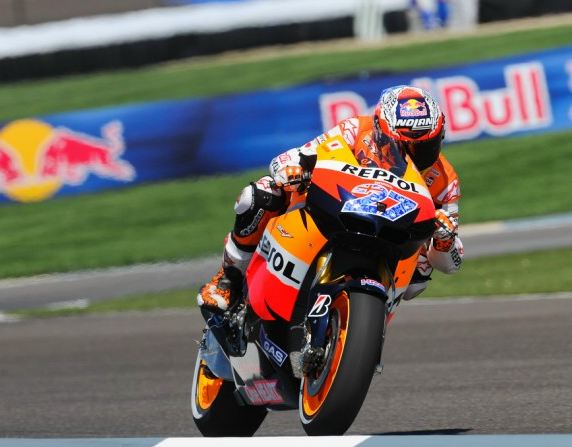 Casey Stoner completed a perfect weekend with a Pole position and a win at the Red Bull Indianapolis Grand Prix. His victory also marks second successive win for Honda at the brickyard and third consecutive win in America. Stoner also achieved a new fastest race lap record of 1’39.807. This is Stoner’s seventh win of the season and third consecutive win in a row after Laguna Seca and Brno.

Ben Spies finished third, followed by Jorge Lorenzo – both the riders on their factory Yamahas. Andreas Dovizioso finished in fifth, while Rossi fionished a dismal 10th

Casey Stoner now leads the Championship with 243 points (a 44 point margin over Lorenzo), with Andrea Dovizioso in 3rd position on 174 points and Dani Pedrosa, 4th position on 130 points.

Here is the final classification, followed by the quotes by some of the top riders

Casey Stoner:
“We got an OK start and I should have been a little more aggressive in the first corner. As I entered turn two, Dani hit the breaks quite hard and I just had nothing, my brakes weren’t warmed up yet and I had trouble stopping, I was lucky to get through the first lap. The race was tough, conditions were very hot and the track surface a little more slippery than practice and qualifying which made things difficult to know how much to push. At one point, I closed the front and dropped the bike on my knee, I was pretty much down but managed to pick it back up and not lose too much confidence. From there we started to make our way past Dani, put in a few good lap times and pull an advantage. Under challenging track conditions everything has worked really well this weekend, the crew did a fantastic job and gave me a great bike so a huge thanks to them all!”

Dani Pedrosa:
“We are very happy with second place today for several reasons. After yesterday’s qualifying session, we had to work hard to reduce the one second gap we had from Casey, it wasn’t normal to be so far away from him. To finish second after the crash in Brno is a great feeling. I knew that my race pace wouldn’t be as fast as Casey’s, but the team did a very good job, helped me to feel more comfortable with the front and I was able to find a good rhythm, just 3-4 tenths slower than Casey. It was a tough race being alone, but I focused on my lap times and I made my best lap at the end, so I’m happy with my performance and the bike. To get 20 points is not so bad after the crash in Brno and I look forward to going to Misano next week to try and take another step forward.”

Nicky Hayden:
“It was a really tough day. We thought the soft front tyre could be a good option for the race, but unfortunately it only worked for seven or eight laps. Then I began to steadily lose ground until it even began shaking on the straightaways, and I had to come in. Since you’ve got to finish to get points, I went back out, and it was actually worth getting two points. I got a good start and was up front the first few laps, and that was the first time I put up a real fight in the dry all season. My bike felt fast in a straight line, and with this new gearbox, I could get out of that last corner and keep guys in the draft early on. We’re on our first race with this bike, and maybe we don’t know enough about what it needs. Sorry to all my US fans and the Ducati fans here who came to support us, but we’ll try again next week.”

Valentino Rossi:
“A number of things happened this weekend that contributed to making this a particularly difficult race: the crash yesterday in qualifying, which robbed some confidence and was part of the reason we had to start so far back on the grid, and today there was a problem with the gearbox. The bike stuck in neutral six or seven times, and the first two caused me to go straight and lose time. I found myself in last place, but I decided to do what I could to at least get some points. In this morning’s warm-up, we had made a small change that let us improve the pace a little, but the race was really difficult. We know that we have to work hard. Ducati is doing that, and my team and I are as well, because we must try to not let up and to get the bike ready while we wait for technical updates.”

Ben Spies:
“My actual start wasn’t too bad, just a couple of people got into turn one too hot and I got bottled in. I think Dovi came across in front of me in turn four and I was just glad to stay on the bike. I never even saw him. After that happened we just had to pluck away and not get ahead of ourselves. We rode well but just needed to be up there in the first four turns. I rode as fast as I could; it was tough to pass out there as we couldn’t get it done on the straight so we had to figure out some different spots. I was happy to be able to do that and still run good pace at the end.”

Jorge Lorenzo:
“It’s a shame; I thought I could reduce my gap with Casey at Indy but since the first practice I have had many problems with the asphalt and the front tyre. I’ve tried everything with my team to fix it, but we couldn’t. After four or five laps the front tyre was destroyed. I saw the other three front riders and their tyres were perfect. I don’t know if it was because of the track and I’m not the only one complaining. Now the Championship is much more complicated, but hope is the last thing you can lose. Next weekend we ride again at Misano, I looking forward to forgetting this result.”