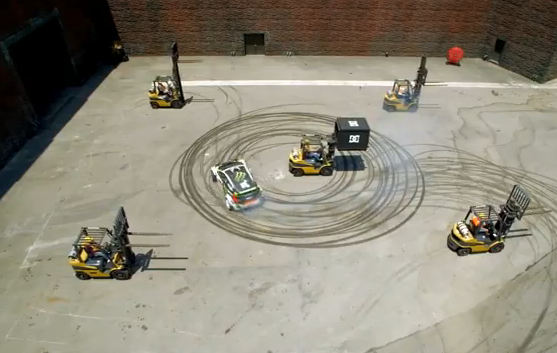 DC and Ken Block have come out with the fourth edition of the popular Gymkhana series. They have named it Gymkhana FOUR: The Hollywood Megamercial. This time, Gymkhana surpasses the high-production style of Gymkhana TWO with even more spectacular effects shot with the Universal Studios, California as the backdrop.

Filmed over the course of five days, director Ben Conrad (Zombieland and 30 Seconds or Less) and his team at Logan deliver a Hollywood caliber production complete with pyrotechnics, massive stunts and a series of unbelievable tricks.

Featuring robotic sharks, deranged zombies, and a hilarious cameo by the Epic Meal Time guys, Ken Block and his Hybrid FunctionHoon Vehicle (H.F.H.V.) bring the magic of Hollywood and gymkhana together. Guess what ‘s the best part? The trick ends with a show with some Bollywood style music and dancing!
Enjoy the video. We think it’s the best in the series thus far. What you think?