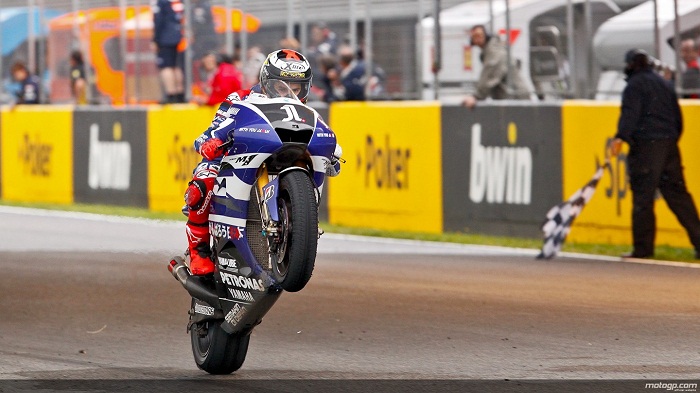 Casey Stoner (Repsol Honda RC212V) says: “We made a good start to the race, we understood the tyres weren’t the best and they were trying to spin, so we needed to back off quite a bit.”Rossi came up the inside and wasn’t able to stay on the bike and took me out. It was not the best day for us for sure, after such a good weekend. We’re very disappointed with this result. I believe we would have been there at the end because it was a long race with many people crashing which is why we were being quiet.”For sure, I would prefer if Valentino did it away from the cameras and would say something to me quietly without always having to have proof. For sure Valentino doesn’t do this for himself, he just wants to show to everybody that he has apologize. Yes it’s a nice gesture, it’s very good, but it still doesn’t change the result today, so we’ll see what happens in the next races.”

Valentino Rossi (Ducati Team GP11) says: “Today in the wet we had a great chance for me to make my first podium with Ducati, or even to get my first win. I felt good, both with the bike and my shoulder, because I could brake where I wanted to rather than where I’m forced to in the dry, since I still don’t have the necessary strength.”The bike is very fast in the wet. I was advancing really well, and I’m sorry to have made that mistake and thrown away such an opportunity. While braking for the first corner, I entered a bit long, and although I tried to stay to the inside, I lost the front and couldn’t stay up.”I’m sorry, because I also took out Stoner, and I certainly didn’t want to do that. I apologized to him, and I’m truly sorry; it was a mistake. It’s a shame because we really could have gotten some satisfaction, but we’ll keep trying. We’re still not so fast in the dry, but we’re working hard. Anyway today’s fifth place gave us eleven points that are very important in the championship.”

The very first European round of 2011 Grand Prix racing will be remembered for very long time due to one of the biggest feuds between Valentino Rossi and Casey Stoner. Stoner had a good start, getting out front of the MotoGP pack first. He led until 22 laps remained, when the Australian was passed by the San Carlo Honda Gresini rider Marco Simoncelli. As Stoner began to fight for the lead again the Ducati Team rider Valentino Rossi was having the best ride of the 2011 MotoGP season. On the eighth lap, Rossi caught up to Stoner after moving up from 11th on the grid. But when Rossi made an attempt to pass Stoner at the end of the front straight heading into turn one, he crashed. Rossi was on the inside line, and after passing Stoner he turned in too early, folding the front-end of the Ducati GP11.When he began sliding, he took out Stoner’s RC212V, both bikes becoming tangled with Rossi still underneath his machine. But after both remounted their prototypes, Valentino Rossi was able to finish fifth after a bunch of other riders crashes at the wet Jerez MotoGP Circuit, the Italian collecting 11 points at the end. The Repsol Honda Rider Casey Stoner was furious by Rossi’s Move and he specially stood by the track to applaud for 9 times World Champion for his move.

It was a dramatic race. Usually the premier class races are not this close but thanks to the weather and damp conditions, the race kept everyone on the edge of their seats. The Rossi-Stoner collision left Simoncelli and he was holding a two-second lead but the Italian threw it all away when he highsided  at turn one on lap 12.  That handed Lorenzo a lead he held to the flag, but not before successfully responding to pressure from countryman Dani Pedrosa, who closed almost to within striking distance of the Yamaha rider before losing pace. Later on Pedrosa started suffering from his arm pain and he was losing all the time to other Yamaha Factory rider Ben Spies. But Spies also ran out of luck as he crashed too on lap 25. That mistake handed fellow American Colin Edwards the final podium place, the Texan Tornado who was just gone past Nicky Hayden crashed surprisingly due to a technical failure on the last lap.
Hayden thus picked up Ducati’s first podium of the season, from eleventh on the grid, with Hiroshi Aoyama just behind him. Rossi was over 1 minute from Lorenzo, who once again celebrated by jumping into a lake. Rookie Cal Crutchlow was another victim of the grip levels, falling from his Tech 3 bike while fifth with seven laps to go – the Englishman rejoined to finish eighth behind Hector Barbera and Karel Abraham. Abraham also fell during the race.
It was a great day for the riders who were quite behind on time sheets in dry conditions. LCR Honda’s Toni Elias claimed ninth and coming back to MotoGP after a long time, John Hopkins Finished tenth as a replacement for the injured Alvaro Bautista at Rizla Suzuki. The sole Pramac Ducati finisher was Loris Capirossi who finished 11th.  Andrea Dovisiozo finished 12th and last as he suffered major tire problems.